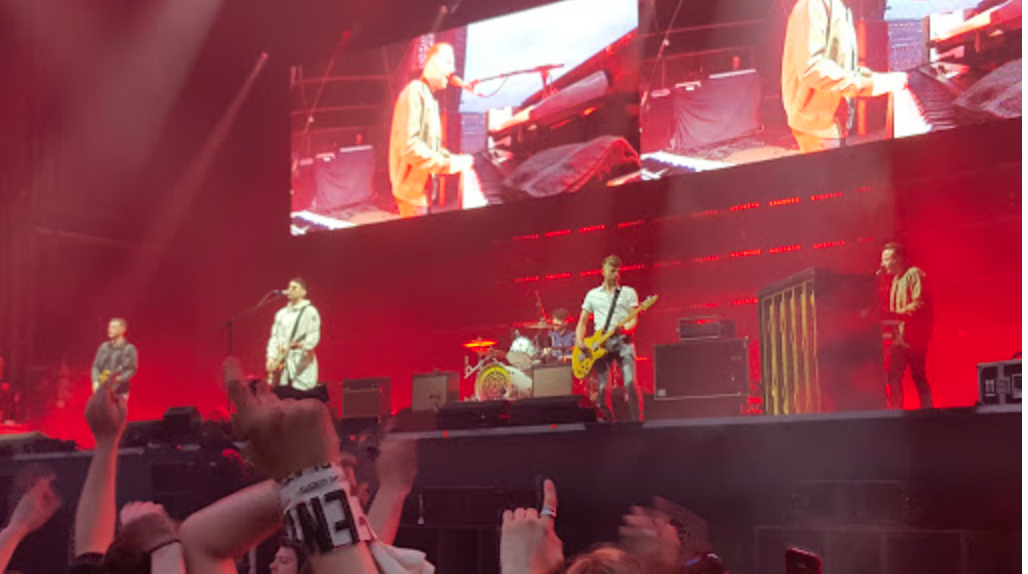 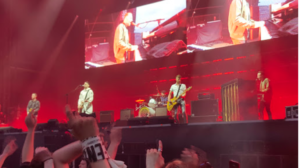 It’s been a traumatic week in Manchester after the cowardly terrorist attack on the children at the Arianne Grande concert. The city was hurting and the music scene was hurting. What better way to come together at the sold out 50 000 capacity show by local heroes The Courteeners – a big gig that took on gigantic proportions in the context of everything that’s happened and provided a platform for the ‘big hug’ from the band’s articulate frontman Liam Fray who put some of his heroes to shame with his handling of the situation…our man on the street Wayne Carey reports back.

This was a gig that should never have happened after the terrible events on Monday night but went ahead with 50,000 people turning up in defiance of terrorism and making me proud of Manchester and the resilience of the people who choose to live in this great city.

The line up is some of the best Manc talent around at the moment and the mood of the crowd is in party mode! Cabbage kick of the show with an excellent set as ever proving they can come to a big stage and nail it. They do a short set of six songs starting with Uber Capitalist Death Trade followed by Necroflat In The Palace and Dissonance which has people throwing shoes in the air, a hat and a coat! Dinner Lady gets a great reception and Gibraltor Ape is awesome as is Kevin. They must have convinced and converted a few fans with this performance.

Blossoms have never really floated my boat but win me over with a great set of pop gems, especially Blown Rose which is a great song showing the Stockport boys have a great songwriting talent and can perform to a large audience like it’s in their DNA. The last two tracks Blow and Charlemagne whip up the atmosphere and prepare everyone for the legends that are The Charlatans. Tim Burgess has a back catalogue to kill for and they kick off with the excellent North Country Boy and the timeless Weirdo which is a fan favourite. Good Times gets the Manc approval with it’s great summer groove and the audience dance like maniacs. They just had to play The Only One I Know but the highlight was a stellar rendition of Sproston Green which ended the set and they left the stage to a mass roar of approval. I could have watched them all night.

Courteeners enter the stage, Liam Fray wearing a white trenchcoat. He starts the gig by reading the beautiful Manchester poem by Ryan Williams which they did at the Halifax gig and I swear people are crying with emotion all around me. They launch into their set with Are You In Love With A Notion, their anthem Cavorting which is sang back to them tenfold by the crowd. Lucifers Dreams shows their rock credentials with the true dynamics of a band destined to be on the big stage. Summer has the same effect as when The Charlatans did Good Times everyone losing it to that Manc groove. Sycophant is a corker and Take Over The World is blasted out by most of the 50,000 crowd word for word. Liam does a few acoustic tunes including The 17th and Please Don’t but the highlight of the night by far has to be their cover of Don’t Look Back In Anger which has everyone in the stadium singing along and could probably be heard in Middleton! People are hugging each other and showing their emotions with no shame after the scenes in Albert Square a few days ago. This will be remebered as the song that defies terrorism and how the Manc people came together and didn’t crack. They finish the set with Not 19 Forever and the flares are set off which I was amazed about considering the high security. The big event ends with What Took You So Long and everyone leaves the place on a high after witnessing a great Manchester gig by four great Manchester bands. The bees were definitely buzzing tonight in the face of adversity.