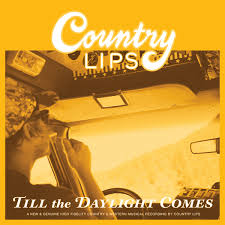 COUNTRY LIPS: ‘TILL THE DAYLIGHT COMES

An album that unashamedly does what it says on the tin: “a new and genuine high fidelity country and western recording” – the feel of being  ever so slightly tongue in cheek and with an element of self depreciating humour underplays a quality set from a much maligned genre.

It’s the fourth album from the Seattle eight piece whose Country & Western roots blur into a kind of all encompassing Americana; something  which might be a sexier, less crusty and less stereotypical label than being tarred with the C&W brush. And one which veers into  a more blues styled, honky tonk, up-tempo rhythms, striving to touch base with as many musical forms while keeping their musical palette within a comfortable  boundary despite the constant switch of lead voices and instrument swapping going on. More Country & Wild West than C&W if you like.  Adding a little edge  ‘Till The Daylight Comes’ comes produced by Randall Dunn who can count Sunn O))) and the Master Musicians Of Bukkake on his credits; a match not  quite what you’d expect from a C&W outfit.

Along the journey towards daylight, rest assured  you’re going to encounter the sort of familiar pedal steel you’re likely to hear on a modern day Dylan record in the romantic themes of ‘Only Here Long Enough To Lead’. ‘Friday’s My Friday’ ventures towards an angst tinged blues while there’s an element of ska in ‘Reason I’m Drinking’ and the carnival/carousel country fair roll of ‘Holding Out’ is sure to have the girls hitching up their skirts – for dancing purposes you understand. It might sound a bit cheesy but there’s a strong feelgood factor amidst the tales which skim round traditional C&W fayre in favour of more melancholy drinking their wages away in dimly lit bars with the threat of pool cue clashes and cowboy cacophony. Not quite debauched but more edgy Johnny Cash territory and one of those records from a band who are making it their mission to give C&W and its related offshoots, a good name.

You can watch  ‘Grizzly Bear Billboard’ from the album here: