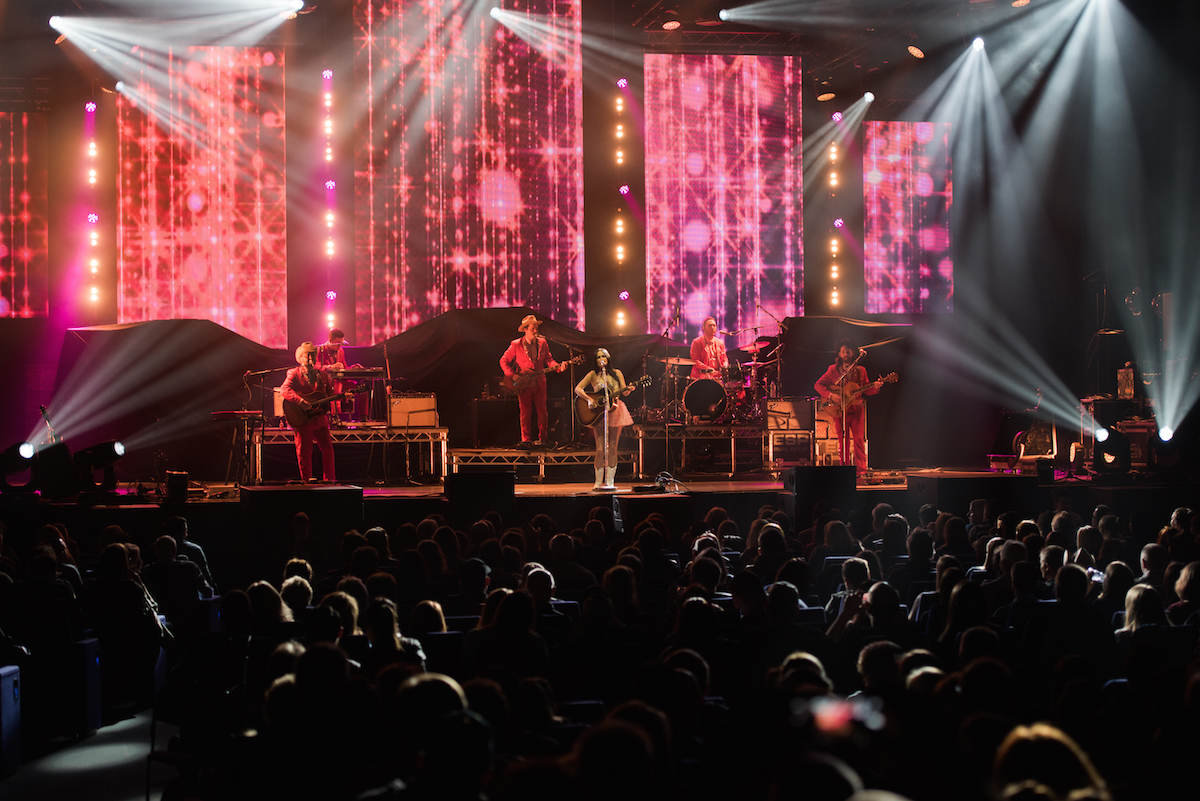 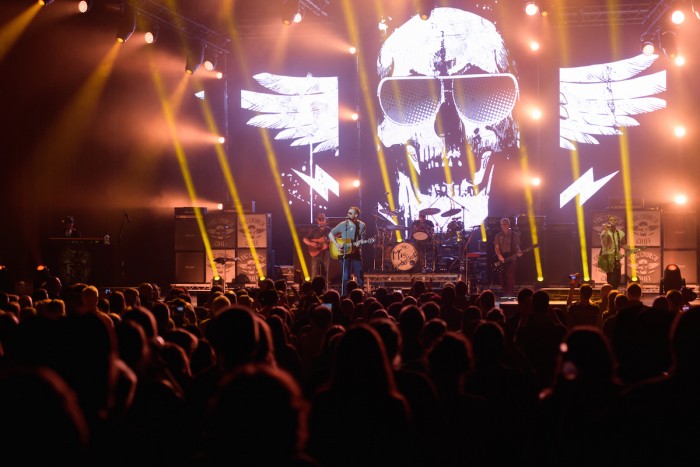 Four of country’s finest acts take to the Clyde Auditorium’s stage, in a show of epic proportions from sugary country pop to compelling country ballads tonight has it all.

It’s safe to say that Country music has had something of regeneration, particularly in the UK. This past weekends’ Country 2 Country festival is a great testament to this, having gone from strength to strength the festival now takes place across London, Dublin and Glasgow with a rotating cast of some of the biggest names in country music.

Taking to the stage in Glasgow on the Saturday night are four distinctly different acts all showcasing a different facet of the country sound. First up tonight is the brilliant Andrew Combs, the Nashville native has the traditional country sound down to a tee with the delicate and laidback Suwannee County. It isn’t all chilled out country ballads as he picks up the pace with an upbeat singalong to the rockier Emily. 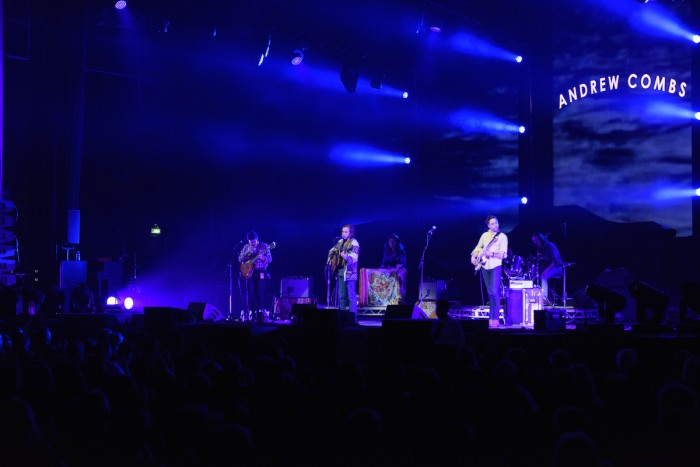 However, Combs closes out on a sombre tone with the downbeat Month of Bad Habits, this is where his gritty tone and passionate manner really shines through. This outpouring of emotion is something of a theme as in vogue country star Chris Stapleton takes to the stage. With over a million copies of his album Traveller sold worldwide, it’s almost baffling to see him so far down this bill.

He takes to the stage with minimal fuss, joined by his wife and his band. Hunched over the microphone pointed toward his wife he produces one of the most impassioned and enthralling sets we’ve seen in a long time. His incredible voice ringing out through this exceptional venue has almost everyone stunned into silence. Tracks such as Whiskey and You, Might As Well Get Stoned and the incomparable Tennessee Whiskey all have a starring role. 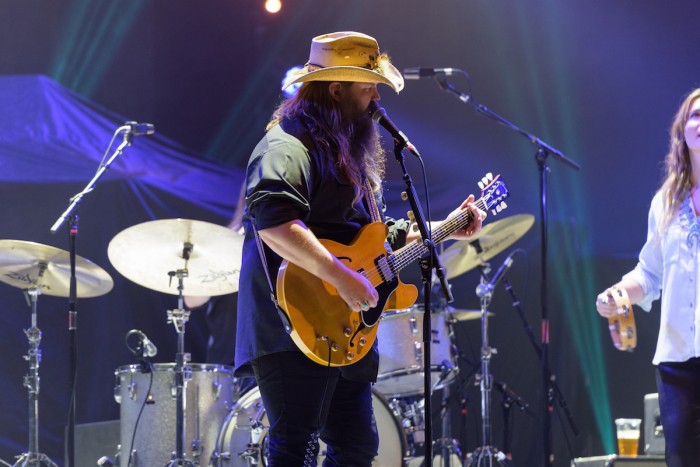 With only half an hour there are some omissions from his set, but such is to be expected. The crowd’s reaction says it all though, it’s proof of his current deserved high profile status. This will not be the last we see of this incredible artist. In a complete contrast to Chris Stapleton, the wonderfully sparkly Kacey Musgraves steps up next with her band clad in pink rhinestone encrusted suits it’s a garish sight but it works.

Her enthusiastic start lifts the mood in the room, opening with the upbeat Pageant Material this track is closer to pop music than it is country. However, tracks like Family is Family make up for this in abundance, with its cutting lyrics and excessive slide guitar. Its heartfelt and scathing whilst maintaining an excited tone the perfect country juxtaposition.

Its followed by a slew of exceptional country ballads, her bubblegum and glitter appearance masks the passionate and deep lyrics. There are some sweeter elements to her set though, with a cover of the classic A Spoonful of Sugar going down a storm in the packed auditorium. Whilst closing out with the perfect cover for a lady with her own line of cowgirl boots in the form of These Boots Were Made For Walkin’. 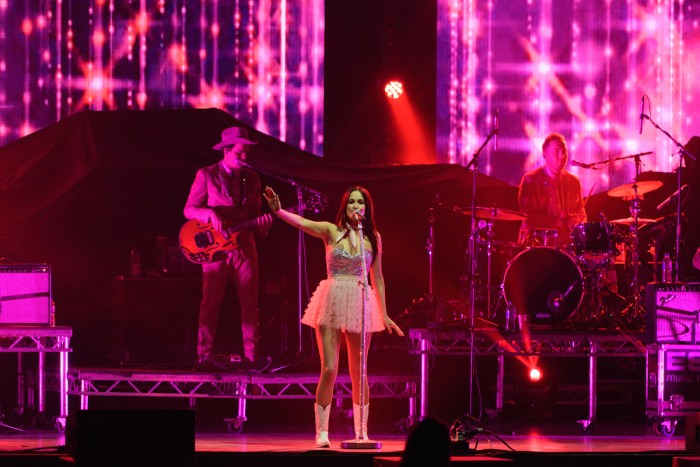 From sparkly country pop princess to tonight’s headiner Eric Church, one of the bastions of the Bro-Country sound, his hard rocking take on country sees him firing on all cylinders tonight. In a complete contrast to the other acts on tonight’s bill, at times Church’s sound is more stadium rock than it is country. The perfect example being opener Knives of New Orleans, with its thunderous guitars and powerful sound it lights up this heaving venue.

However, once Church hits his stride tracks like Mr Misunderstood restore the country atmosphere, this gentile track with its chilled out vibe. Providing the perfect tonic to the hard rocking opening, it’s only a brief let up as Church continues to deliver hit after hit with the funky That Damn Rock & Roll being a particular hit. 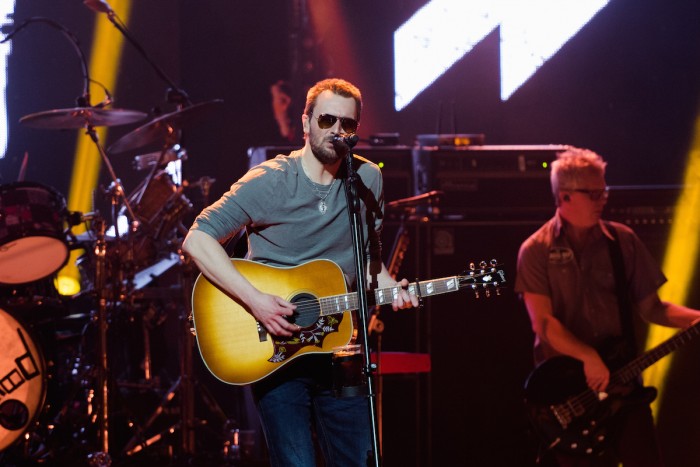 Church swaggers around the stage goading the adoring crowd by the time he gets to These Boots, the crowd are wilful participants with all manner of footwear being offered up. With the set reaching its crescendo, Church once again elevates the pace with a raucous rendition of Springsteen that has the whole crowd on their feet once again.

Despite its relatively large size, the Clyde Auditorium feels incredibly intimate even with the huge production elements on stage and there’s something special about the venue. These artists are used to arenas and even stadiums, and whilst the stage looks like its set for that the overall atmosphere is warm and welcoming. Therefore setting it apart from its London counterpart where these acts took to the O2 stage.

Overall though tonight showcased four exceptional acts, each with their own take on country from the bombastic Eric Church to the introverted brilliance of Chris Stapleton. Country 2 Country had it all, it certainly proved that the country music scene in the UK is alive and well!

~
Andrew Combs can be found online here andrewcombsmusic.com. He is also on Facebook and tweets as @Andrew_Combs.

Chris Stapleton can be found online here chrisstapleton.com. He is also on Facebook and tweets as @ChrisStapleton.

Kacey Musgraves can be found online here kaceymusgraves.com. She is also on Facebook and tweets as @KaceyMusgraves.

Eric Church can be found online here ericchurch.com. He is also on Facebook and tweets as @EricChurch.