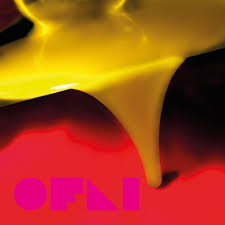 Ofni isn’t real. Ofni is a mythical world born from Celtic folklore and mythology. It’s not the now or the past. Its name is fear yet its language and its culture is warm, embracing and welcoming. Ofni’s Creators (big C required) are Llion Robertson and Seb Goldfinch. This is their concept and their genetic experiment. They say it was developed during a backdrop of “social uncertainty” yet there is nothing uncertain here. Robertson and Goldfinch maybe living in anxious times yet they never allow for anxieties to strangle the melodies within their self-created planet. This is high fiction. Ofni is as visual as it is audible and that is down to Robertson and Goldfinch’s innate gift to highlight the smallest details within the bigger picture.

Ofni does not follow linear narrative. It’s moment of conception arrives five tracks in with Auto a track that time-stretches its way into life before the scattered voices and machine-start up sounds invoke a controlled chaos…your starter for 10. Skip forward three tracks and the chaos is starting to takes shape with Plume a song that has heavier tones underpinning its glitch framework yet snaking its way throughout like a trusted guide and mentor is a beautifully cyclical melody that often feels like it is running way too fast for you to keep up but like all good teachers it is here to push you onwards and to keep you one step ahead of your comfort zone. Winter Fields is heavier still and is an album highlight. Its finely balanced aesthetic allows for the traveller to enjoy the dense undergrowth and its dark shadows. We all enjoy that rush of looking around doors and entering darkened rooms not knowing what lurks around in the spaces not clearly visible. Every world needs its dark and its light..Winter Fields is that dark.

So where is the light? Light is necessary and it is in wild abundance here in Ofni. The best example? Look no further than the title track itself. Here Robertson and Goldfinch finally allow us some human interaction and it comes in the form of Adwaith’s Hollie Singer. Over a languid strut, Singer’s voice comes through crystal clear. Front and centre.  It is a really beautiful vocal performance and one that gives Ofni its human heart. Speaking of humans…

Ofni’s lifeforms, like all of human civilization, love to speak through the language of dance and there are plenty of opportunities here for the enjoyment of movements set to the rhythmic pulse of electronic music. Opener Chrysalis is sweet slice of euphoria whilst Prism hints that Ofni has a connection to our very own world of sweat-drenched electro clubs. The “big un” though is Shards which exhibits a shared DNA with the work of Kieran Hebden and matches the acclaimed producer’s talents at mixing the spiritual with the sexy, with the pure and the lustful…Shards is a really sexy piece of work and what is a new world without pleasures carnal.

Cotton Wolf have evolved. They’re gifts from everything to songwriting to production, from concept to delivery have really evolved since we last heard a full length project from them in 2017. Cotton Wolf have created a universe of their own using the history of Welsh and electronica culture. Ofni is an addictive place to visit and a world a lot of people should visit.