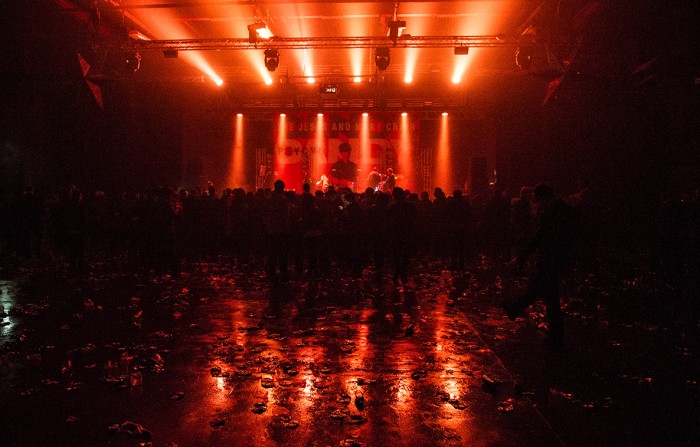 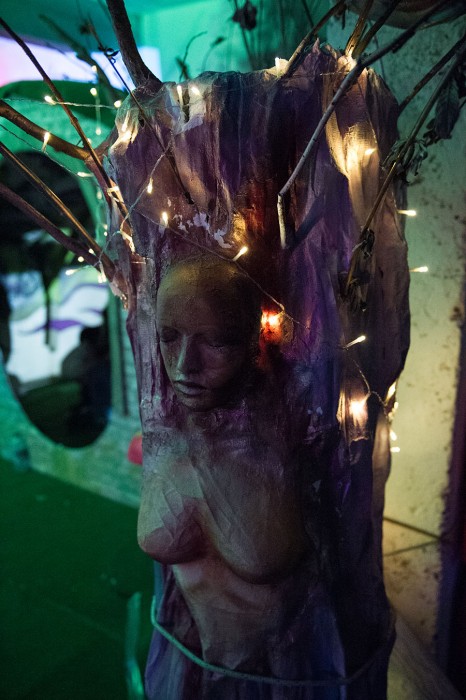 The Cosmosis Festival one-day urban festival promoted a seriously impressive exciting line-up of artists and bands from the psychedelic and wider alternative rock scene. With such an abundance of things promised it was destined to be a struggle deciding who to see and the reality certainly played out as expected for Louder Than War’s Katie Clare, and photographers David Gleave and Melanie Smith.

For the consideration of my fingertips and brevity I’ll pass on the comedy of errors that include the farcical journey to Cosmosis’ Victoria Warehouse home and the list of exasperation’s encountered within and concentrate on the important bit: the music.

I’ve never seen Wire live I still technically haven’t, as the Water stage is packed out past its boundaries, but I hear them for a bit, their edgy hardcore art punk pop psychedelia is hard to attribute to anyone else. The experimental conceptualisation of sounds for the most part is intriguing and decisive with occasional plunges into sentimental and hypnotic harmonies. However, without a visual element, it soon feels devoid of all the required components and it is all too easy to be distracted by the band that is starting to play on the main Air stage.

Taking this as a prompt I head over to Uncle Acid and the Deadbeats,  (photo below) a lovely visit to some overindulgent heavy rock psychedelia, full of foreboding threat and wraith like melody. The band have certainly encapsulated perfectly the delivery of saturated guitar duelling, overwhelming riffs and a mash of 60s and 70’s vocal harmonies. Just as the formula starts to tire they side line the drone in favour of some acid-drenched metal, ending as they had started on a much stronger and grander vibe. 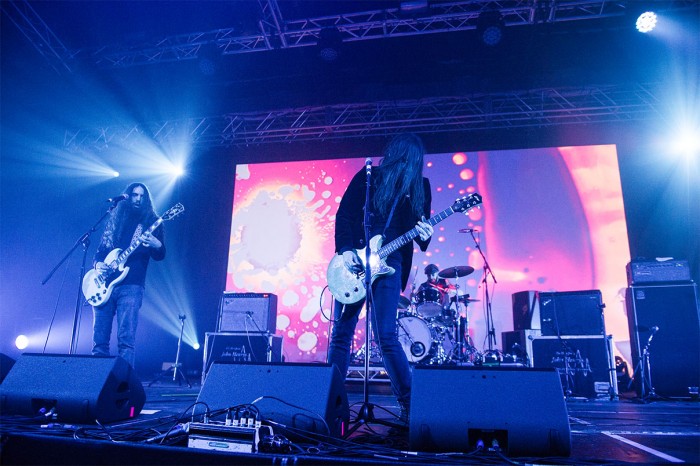 Denmark’s The Ravonettes (photo below) provide both a visual and ear shattering performance, their effects-laden guitar and vocals comes across even darker than their lyrical their bubble-gum sweet pop tunes, peeping through the occasional fracture in their wall of near consistent detonation. 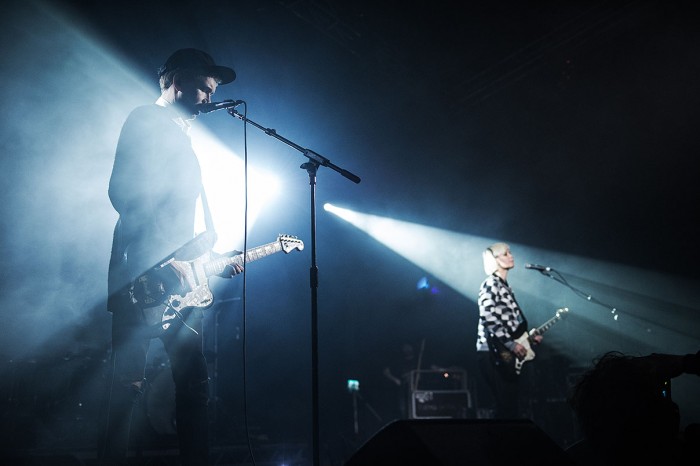 The anticipation for Brian Jonestown Massacre (photo below) is very palpable, techs are still pacing the stage as band members’ picked up their instruments and the lights slowly came down as Anton Newcombe not acknowledging the huge audience applaud his arrival. “Where’s Joel?” the guy next to me asked, his voice a little raised and rapid in panic just as another loud cheer went up the percussion and vocalist had arrived holding up his drink in salutation. Capturing a mental image of those fleeting glimpses as Newcombe and Gion head for the far left of the stage and into the shadows with dry ice enveloping them the projected liquid light show not reaching far enough to illuminate: its swirling colour changes merely silhouetting the remainder of the band. 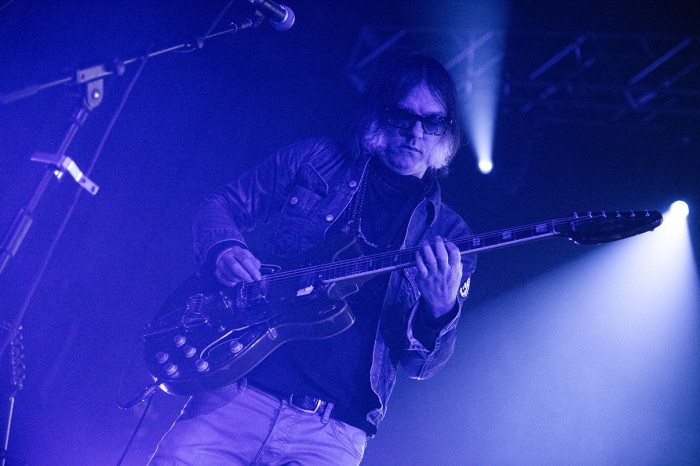 Everything moves quickly into an otherworldliness of distinctive low-fi tremors. The vocals and melodies float and land like a fine dust over an audience caught up in a hypnotic sway. The variety and lushness of BJM’s performance is testament to the bands or more truthfully Newcombe’s need to revolutionise and at times even sabotage the principles of the very musical genres this festival is based around and that are so heavily imitated: his musical alchemy is paying dividends. The music is allowed to take centre stage tonight and in a set of near perfection there are many special moments, one that still remains glowing in memory was Newcombe performing a strikingly charming duet of Anenome with Tess Parks.

Through the stage change the surpluses of energy are waning and it is going to take nothing less than the almighty Jesus and Mary Chain,  (photo below) soundtrackers to a less than perfect state of mind, they are wasting not a second of the dry ices buoyancy and slide into April Skies. Four minutes of breathless emotion and perfect pop melody intertwine for maximum unrequited emotional longing. On the echo of a guitar chord the rush and thrill of Head On takes over and you know that feeling it’s recreating the one you get in the pit of your stomach that is so good and so exciting that you feel queasy. It’s hard to wrap your mind around the fact these songs are 26, 27 even 30 years old, but they are as fresh and emotive as to be connected to sensations and events from mere weeks ago certainly not multiple decades. 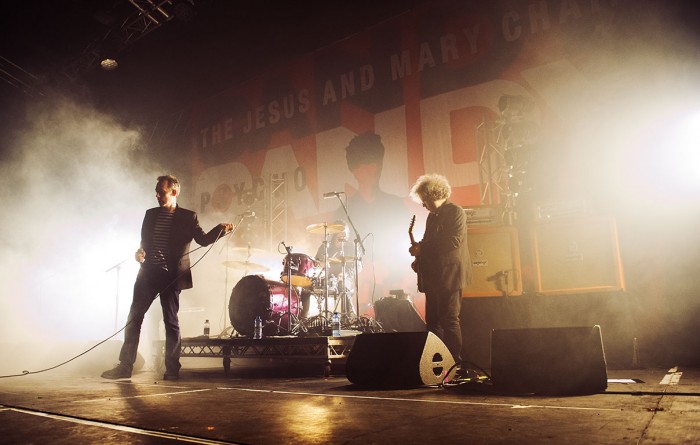 This not remotely a case of a band resting their laurels on their back catalogue: although hell what a laurel rest-er it is. There is always something different to notice – perhaps born of a new personal insight, from a stronger intonation in the way Jim delivers a line or the way William raises the value of distortion or sweetens a note here or there – this is art in perpetual creation and it is truly magnificent.

Leaving Jesus and Mary Chain too early and missing the last third of their set (the guy next to me said you’ll regret doing that – he was right). Arriving back at the Earth stage in time for Ringo Deathstarr (photo below) filling the high ceiling with their solid drumbeat, fuzzy distortion and beautiful hazy melodies that fizzy fly between the two titans of sound and reverb. The Ringo Deathstarr melodiousness is as delicate as it is daring not fearing the result of finding itself squashed almost crushed by the momentous sonic cacophony it does, when you least expect it, pop out to bring another delicate harmony to the forefront of a rich textured noise. 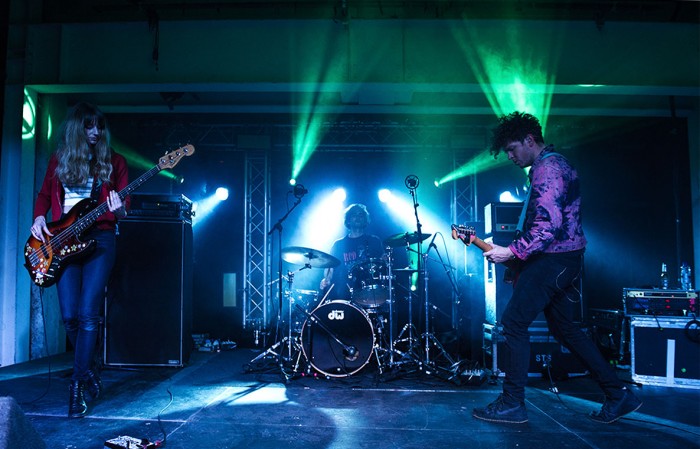 It is a very fine ear shattering end to the evening – I do take myself off to see The Allah-Las close out the main stage but they lose a fight with my gig tinnitus and deciding they deserve more from me than the amalgamated feed back of this evenings many guitars and I head out to a bit of a chilly journey home.

Special thanks to Cosmosis Festival, all the artists and the stage hands, venue staff, the PR’s and photographers for all their hard work.

Photos by Melanie Smith, with additional portraits/live shot of Cabbage by David Gleave. More work by Mel on Louder Than War can be found at her author’s archive. You can find her on Facebook and Twitter. Photography portfolio can be found here: mudkissphotography.co.uk.