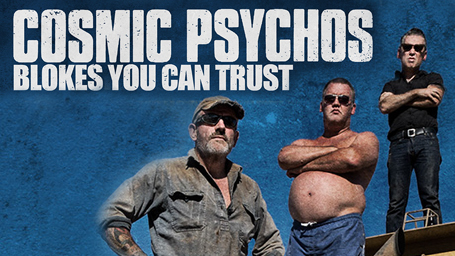 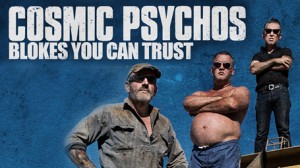 For one night only, UK Premier of “Cosmic Psychos – Blokes You Can Trust” at the Rio Cinema, London – Sat 15th March 2014

For 30 years, the Cosmic Psychos have blazed a trail of empty beer cans and busted ear drums around the globe with their quintessential Australian drawl and pounding punk rock songs.

McFarlane felt that with Knight the group used “equal parts Stooges riffs, Ramones tempos, lashings of wah wah guitar, American 1980s hardcore attitude and a healthy dose of yobbo humour…”They played no-frills, stripped-down punk rock”. Several albums have followed and were backed by national tours and international tours to Europe and North America including festivals with Mudhoney, Nirvana, L7, Helmet and Motörhead. In 1990 Jones was replaced by Robbie Watts on (Gtr/Vocals). By 2005 Walsh was replaced by Dean Muller (Drums) On 1 July 2006 Watts died of a heart attack, aged 47, and the band continued with John McKeering (ex-The Onyas) joining.

Fronted by Ross Knight, ‘Blokes You Can Trust’ tracks the band’s adventures along the rock and roll highway, from downtown Kyneton in rural Victoria, into some of New York’s finest S & M parlours and the Seattle grunge scene where they were highly influential. Nirvana were Psychos fans…they even played shows with Pearl Jam. But perhaps their biggest reputation was their ability to drink pubs dry, with word quickly spreading as a warning to other touring bands – “Never drink with the Psychos!”

With appearances (and party tricks) by Eddie Vedder, Mudhoney, The Melvins, Butch Vig, Hard-Ons, L7 (to name but a few), this doco is a full frontal assault on the senses. Loud, rugged and entertaining Blokes You can Trust shows all of the Psychos’ highs and lows; riches and rip offs; line up changes and loss.

As well as the colourful journey of a band, BLOKES YOU CAN TRUST reveals the personal story of founding member and frontman Ross Knight – musician, world champion weightlifter, the farmer with a bulldozer fetish and dedicated father. This is an extraordinary tale of Australia’s most unique cultural ambassadors, who sing about dead kangaroos, pubs and schnitzels. It’s a tribute to a country lad, a family man, still rocking and rolling, when most have retired to the couch.