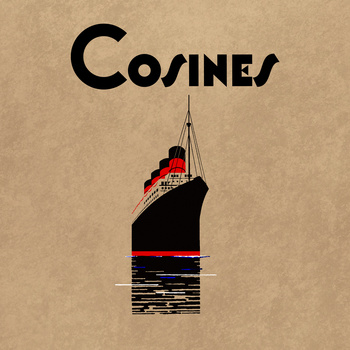 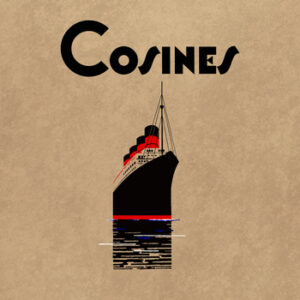 The story of Cosines formation is that founder members Simon Nelson and Alice Hubley met on the London Underground after a Stereo Totale gig in 2009. Two days later Simon was round Alice’s house unblocking her kitchen drain. From such beginnings, it appears, great pop music is made.

Cosines are named after the function in trigonometry and have been described in the past as a mathematical pop band. I’m not sure what that really means, apart from it’s reference to the band’s name, but it certainly doesn’t do justice to their bittersweet love songs. 2013 single Hey Sailor Boy was a real gem of a pop single with its Motown via Belle and Sebastian sound in the guitar crunch and tight bass and percussion.

New single, Commuter Love, stomps along in a glam sort of way (think T. Rex, Dr and The Medics’ Spirit in The Sky or perhaps even Black Rebel Motorcycle Club’s Spread Your Love). But that doesn’t get us to the heart of what’s so good about it. The joy of Cosines is singer Alice Hubley’s wise and sometimes world weary lyrics. There’s a lot of humour in there too, and as you’ll see if you go to a Cosines gig; Alice and the band’s stage persona easily belies any claims of twee-ness.

On the new single’s B-side, Disclosed Stories, Cosines recall the wistful tone of indie pop favourites such as Allo Darlin’, a sweet and sincere tale of daily travel into the office that would make you go freelance in a heartbeat. This is what I want a modern pop song to sound like.

You can hear these excellent tunes and more as Cosines play The Seabright Arms in East London this Friday, 16th May.

Expect to see Simon Nelson, recently recovered from a broken collar bone, displaying the guitar chops of a young Paul Weller plus Stereolab style organ freak outs to boot; not to be missed.

New single Commuter Love is out now on Fika Recordings.

Tickets for friday’s gig are available in advance from We Got Tickets for £5, with a very reasonable 50p booking Fee.

SIMON LOVE
Simon Love (& his backing band- The Old Romantics) are a 5 (or sometimes 6) piece band from that London. Singing songs about sham marriages & self-castration, they have charmed tens of people over the course of their last few shows. The Devil Has The Best Tuna blog named Simon as one of his tips for 2014 saying “He’s like the unheralded love child of Elvis Costello & Elton John with a bad case of Tourettes”. There will be an LP out on Fortuna Pop at some point this year.

GIANT BURGER
Giant Burger were formed from the ashes of BAANEEX, a Dracula-centric pop punk band that came to an end early 2012, now, like all good burgers they have been reconstituted, reformed and had some artificial flavours pumped into them.

Made up of three former members of BAANEEX, three chaps and one lady, one electric guitar, one drum set, one baritone guitar and one Casiotone keyboard.