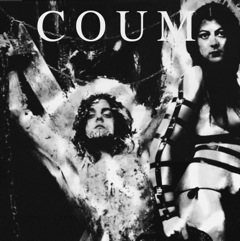 Cosey Fanni Tutti and Genesis P-Orridge are set to give live performances in an extended programme of events to mark the radical art collective COUM Transmissions.

The events will coincide with the COUM Transmissions retrospective being staged as part of Hull UK City of Culture 2017 from 3 February – 22 March.

Cosey Fanni Tutti, Cabinet, London and Luke Turner and Sophie Coletta of leading independent online music and arts publication The Quietus in collaboration with Hull 2017 City of Culture have curated a programme of live and club events, panel discussions and talks, to celebrate the practice and impact of COUM Transmissions, tracing a line from the group’s conception in 1969 to their termination at the Prostitution retrospective held at the ICA in October 1976, exploring a legacy that endures today.

The events will run alongside a six-week long exhibition at Humber Street Gallery, a brand new contemporary art space for the city showcasing the best contemporary art in the heart of the Hull’s Fruit Market cultural quarter.  COUM Transmissions, curated by Cosey Fanni Tutti and Cabinet, London, will present material drawn from the archives of Cosey Fanni Tutti and Genesis P-Orridge (held by Tate Britain) alongside new filmed interviews with some original COUM members.

The live programme will feature performances and appearances from original COUM members, as well as subsequent generations of artists they have both directly and inadvertently inspired. It will seek to reclaim Hull as an important site of cultural innovators working on the peripheries of the underground.

Cosey Fanni Tutti, talking on her return to Hull, said: “So much has changed for me and Hull since I left in 1973. I couldn’t get out quickly enough – and some who thought of me and COUM as distasteful, disruptive elements couldn’t wait for me to leave either. My own and COUM’s activities went up quite a few notches after Hull. Now I’ll be back and Hull is all ‘cultured up’, embracing COUM and recognising its influence and place in art history. I’m thrilled to be returning to my hometown to co-curate the first ever COUM exhibition… and in Humber Street Gallery, one of the former fruit warehouses that unwittingly fed me for free when I was penniless and hungry.”

Genesis P-Orridge explains, “We left Hull in July 1973 and have never been back since. We also burned all our journals from that era too. Leaving us with very few triggers to reviewing any memories. As the COUM collective we didn’t like the term ‘perform’, it implies choosing to pretend to be… we were more happy with “actions”, something you DO, spontaneous, energised, intuitive and a coumpulsion. For us “The none creation of art is as valid as creating it”. The thought alone is often enough.  So walking those streets in Hull again in 2016 was like being a ghost searching for my SELF in a distant past. The strangest and most unexpected feeling we experienced was that everywhere, every building, seemed smaller than we recall. Just like accessing memories of events as a very young child things are often seen as far more large in scale, more overwhelming; for me visiting Hull had the opposite effect. When we checked our Hull memories against the present day, we discovered that everything felt like it had shrunk. Not just a little, but by a huge amount.”

Martin Green, CEO and Director of Hull 2017, said: ”That Hull gave birth to COUM Transmissions is one of the great untold stories and I am thrilled that Hull 2017 gives us the opportunity to tell it to the world. The COUM retrospective, which opens the brand new Humber Street Gallery and these live events, will offer a belated contemporary insight into this ground-breaking art collective, which continues to be hugely influential. As one of the early highlights of Hull 2017 it underlines how this city has been at the forefront of cutting edge ideas that challenge convention.”