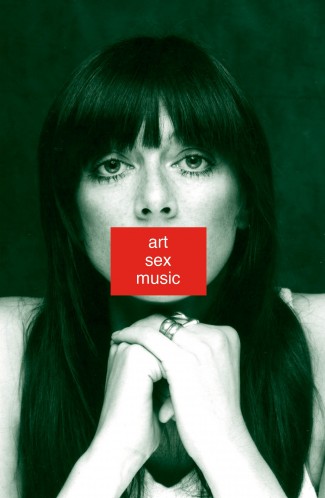 Art Sex Music is the autobiography of artist Cosey Fanni Tutti. As a member of the infamous COUM Transmissions collective, industrial pioneers Throbbing Gristle, and leading lights in the world of electronica with Chris & Cosey, Cosey has been at the vanguard of modern art for over fifty years. Simon Tucker reviews. (Cosey Fanni Tutti will be in conversation with John Robb in July – details here)

Cosey Fanni Tutti is, it is safe to say, someone who has lived a thousand lives. Through her various works she has pioneered the use of ones own body as art, helped create and entire genre of music whose influence is still resonating to this very day, and has been a powerful force for change towards the general perception of female artists. The USA has Yoko, we have Cosey.

Art Sex Music is a brutally honest read, no stone left un-turned. Aided by her diaries Tutti takes us through her life from her birth and upbringing in Kingston upon Hull during the fifties and sixties, to her meeting with Genesis Breyer P-Orridge and subsequent work with the once notorious now celebrated COUM Transmissions performance and mail art collective, through the forming, disbanding, and reformation of Throbbing Gristle, right up to the present day. Cosey is an artist, a partner, a mother and every section of her life is described in unflinching detail making Art Sex Music an enjoyable, uplifting, sometimes unbearably raw read.

At its very core, Art Sex Music is a book solely about relationships. Tutti takes us through her childhood which is far from serene as she is raised by a distant and sometimes abusive father. Her rebellious nature is nurtured by the sixties counter-culture. Music and recreational drug use help to open Tutti’s mind up to the possibility that there is a better life for her outside of the suffocating walls of her home. Upon meeting P-Orridge, Tutti’s path  is set as she leaves home and begins to explore deeper her desire to create art. What starts as mail-art and performance pieces soon turns darker as Cosey begins to explore the world of adult magazines and the pornography industry. Make no mistake, nothing here is about cheap titillation and the situations Cosey put herself in whilst studying this industry is often very tense and unsettling as whilst she explains in perfect detail why she did what she did and what purpose it was serving you worry about her (Tutti’s writing style is so relaxed and matter-of-fact that you feel yourself developing a bond with the narrator on a deeper level than just admirer/reader). There are moments where events get particularly tense which can twist your gut. The relationship between Tutti and her own body is the core of the earlier sections of the book and obviously this is the highlighted Sex aspect of the books title.

During the sections on Tutti’s involvement with COUM it becomes horribly apparent how even during the so-called free times of the sixties and the counter culture attitudes towards conformity how cliched and conformist a lot it actually was. Being the only female member of the collective, Tutti is still expected to serve a patriarchal system where she cooks and cleans for the men even though she is pushing herself to the extreme in her art and working jobs to keep money coming in for the rest to use for food etc as they live in dilapidated building. Outwardly COUM were forging new paths and subverting attitudes whilst in doors the woman was still to know her place. It is also worrying how the mental and physical abuse by P-Orridge escalates over time. Tutti paints the picture of someone who is manipulative and self-serving, taking credit for others ideas and always desperate to be seen as the “leader”. It comes as no surprise that P-Orridge was fascinated by such men as Charles Manson and Brian Jones, both mercurial and persuavive individuals who used physical and mental abuse on those around them. Some may see this as Tutti using the book to “point score” but this is why it is so vital that she speaks so plainly and honestly as she does. The story of P-Orridge has been told so often it is about time we got the other side of the coin. Yes, Gen is vital to all that went on and was incredible in her ability to create contacts and push COUM and TG on but if you can read  the book and still hold her in some kind of exalted position after he’s just nearly killed  Tutti with a paving slab then you are seriously missing the point.

For many, it is the section focusing on Throbbing Gristle that will be the biggest draw. Arguably the most influential band to come out of the UK in the seventies, TG created a whole genre, system, and philosophy. They were never just another band, they were a movement. With TG comes another two relationships vital to the story of Tutti. The first being Peter ‘Sleazy’ Christopherson who joins COUM as is there as it morphs into TG and Chris Carter a wizz with electronic instruments and soon to become Tutti’s “heartbeat”. The blossoming relationship between Tutti and Carter makes for excellent reading as they are first frustrated by the extenuous circumstances keeping them fully from being a couple before the damn breaks and they fully embrace their life together. This is a traditional love story at its very essence (though the couples activities and performances are anything but) and the love Tutti has for Carter absolutely leaps of the pages. Carter is the opposite to nearly every other male depicted in the book. He is supportive, encouraging, loving and most importantly never tries to control Tutti’s life in any way shape or form. The union between the pair is where real light breaks into world of Cosey and it leads to a relationship that creates a son and is strong to this very day. The fact the pair manage to work together (Chris & Cosey, Carter Tutti, Carter Tutti Void) and live together, never displaying any resentment or aspects of control, shows what a true union of two souls this is. Even during the TG reunion, where old traits reappear  and old tensions come back to the surface, the closeness of the pair is what serves as the biggest aide to get through it all.

Throughout the rest of the book we taken through Tutti’s various art projects, illnesses, achievements,and losses. It is the latter which turns the screw in the reader especially when she discusses the loss of John Balance and her dear friend Sleazy. These deaths are treated with nothing but respect and fondness for the departed whilst very carefully never turning them into martyrs and talking about the various aspects of their lifestyles that ultimately lead to their lives being cut tragically short.

Art Sex Music is an essential read for anyone interested in the human condition. It’s a book about connections and how we as humans meet people, relate to them, and how they affect our lives. It is a book that encoragues free thinking, rebellion, family and friendship. Tutti is a lighthouse for anyone looking for change in their life and a beacon of hope for anyone who is trapped in the old-fashioned nature of patriarchal society. Fearless, powerful, humorous, warm and intelligent, Cosey is everything and this book is a manual for anyone wanting to be the same.