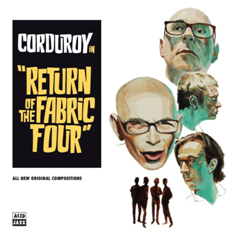 Louder Than War’s Ioan Humphreys gets the first exclusive listen and watch of the brand new video Saturday Club by Corduroy.

Saturday Club is the new video by Acid Jazz legends Corduroy. Taken from their forthcoming album Return Of The Fabric Four, which is out on Acid Jazz on 25th May 2018, this unabashedly cheesy video is fun, addictive and has high ambitions. Returning after a nearly-two-decade hiatus, the band certainly seem like they are having a right laugh in this renaissance of their career. Not taking themselves too seriously fits this track perfectly. In fact, they should be applauded for producing something that is so joyously silly and fun in these dark fucking times. It can’t help but put a genuine smile on one’s face.

Split screen stark white sound stage band larking is mixed with footage of them on a night out down the pub playing a pinball machine. The band look like they are having a hell of a laugh and this manifests itself in this insanely catchy guitar riff led foot stomper that channels The Who via Supergrass. Full of ‘ohh lala’s’, stop start instrumentation and a nice Squeeze-esque keyboard breakdown halfway. Oh, and a great drum sound too!

With its feet firmly in the OK GO camp of fun inventive videos (albeit without the budget!), Saturday Club deserves to be on indie disco playlists throughout the country. It’s an absolute treat!

Corduroy will be appearing at various festivals and embarking on live dates of their own over the coming months, watch this space…

Released through Acid Jazz Records, Return Of The Fabric Four will be available on CD, ltd white vinyl and digitally. Pre-order here.