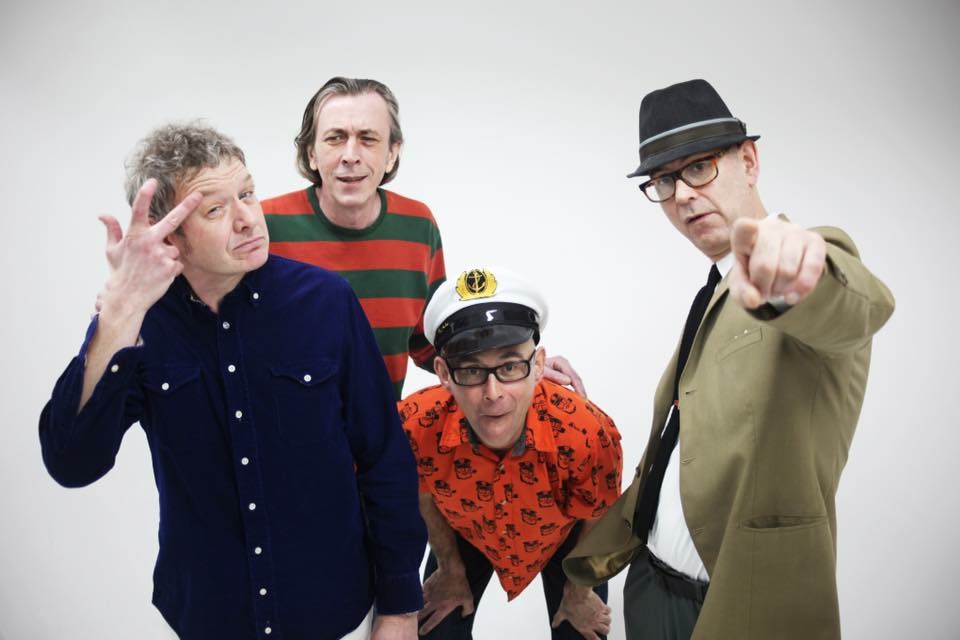 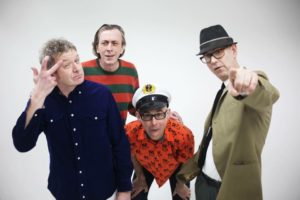 Corduroy are the Acid Jazz favorites who reformed a number of years back to play to their raptorous audiences and are now embarking on a further rebirth with the release of their 6th album Return of the Fabric Four released on Acid Jazz Records 25th May 2018. Matt Mead catches up with Ben, Scott, Richard and Simon to consider many things from their fav 10 albums to Barbara Windsor, Film soundtracks and importantly The Saint or 007.

LTW: Can I first ask what was the first music you heard?

Richard: First musical memory was hearing Paint It Black by the Stones on a tiny transistor radio in a bed and breakfast in Margate in 1966. Simon, Cinderella Rockefeller 1967, Pembury. As children, Ben & Scott, in S.E London in the early 60’s, house & car were filled with Jazz, Beatles, & parents Tom Jones collection with all the relevant US & UK film & tv themes at like Batman or Crossroads theme tune.

What was the first serious music you were introduced to?

Glam rock artists started appearing on Top Of The Pops early seventies, some of which were great, Slade, Sweet T-Rex and then punk appeared in 76. The Sex Pistols- they were the perfect pop band with the additions of sarcasm, swearing and successful revenge on the Industry. Rich saw Generation X support The Jam in 78, Slade were first support.

What instruments did you all first learn?

Scott and Ben had piano lessons up to grade 3, then quit through the excuse of O level exams. Ben had always wanted to be Ringo more than any other Beatle and became more interested in drums- first drum kit at 14. Scott learned 3 gtr chords from a neighbour and taught himself the rest. Simon got a gtr around eight or so.Rich had a few acoustic guitar lessons age 9, the guitar was bigger than him, then nothing until his first bass age 15.

Doctor and the Medics hung around a bohemian pub in Greenwich, known as the Rose & Pose; it’s where all aspiring local musicians drank; we all met there. Ben and Scott were in various bands before forming Boys Wonder (Rich played in Boys Wonder on and off as well as the Medics); Simon played in a school disco combo called Size 3, and then a ‘jazz’ group playing covers, some of which Corduroy played at out first gig at Up The Creek in Greenwich. 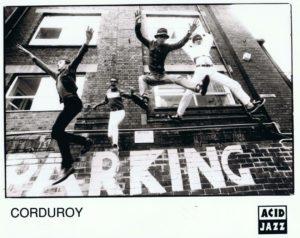 How did you get signed to Acid Jazz? Was there any other interest from other record labels to sign you or was it only your intention to sign to Acid Jazz?

We met Arista and EMI, both were relatively fruitless meetings, then our tour manager/chum Martin mentioned that Acid Jazz records were nearby, why don’t we hassle them? So we did, and 3 days later were in the studio recording dad Man Cat. Ed Piller had attempted to sign Boys Wonder years before; his first words to Rich were ‘are you a mod?’

As toddlers we were in front of the TV a lot, the most exciting music was usually in films or American TV shows- The Munsters, The Monkees, The Man from Uncle, Bond obviously and movies like Sweet Charity; the earliest memorable soundtrack for Scott and Ben would Butch Cassidy and the Sundance Kid. Simon always like the Pinky And Perky theme. Rich was taken to see Chitty Chitty Bang Band at the cinema…and still loves Me Ol’Bambo. 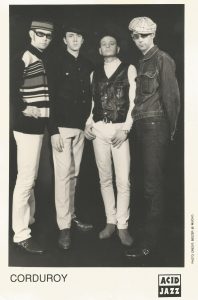 Were you just into playing soundtrack stuff from when you started the band or were you into more traditional songs when your first rehearsed together?

Soundtrack tunes are short and more self-contained than pop music. They are can be written with more precision than pop. Combine that with moving images it becomes proto pop video, like the opening titles of Hawaii five O or Six Million Dollar Man, perfect for infecting the 70’s juvenile mind. Or it might be something relatively novel like the Dr Who theme. Or Starsky and Hutch or Rockford Files, where the tune was much better than the programme.

We’d done a few theme covers at the first Corduroy gig, Sesame Street, Money Runner (The Theme to The Heist), we’d imagined ourselves being the slightly far-out band you might see in a sixties movie, to play and write music to suit; we aspired to being the grooviest group from the perfect swinging party scene; inspired by our favourite sixties movies like Smashing Time or Psych Out…and dressed like James Coburn from In Like Flint.

Following DMC you went on to record High Havoc, with further film soundtrack influences. High Havoc in reality could and maybe should have had a film made regarding it. Was there ever an discussion to have your music accompany a film, ideally in my featuring Michael Caine killing Alf Roberts again?

High Havoc was largely conceived while on tour, the concept was that we more or less map out an idea for a film, and then write tunes to accompany the key scenes in that film, in some cases the titles came before the music. As yet no one has made the movie of the High Havoc soundtrack, but we live in hope. 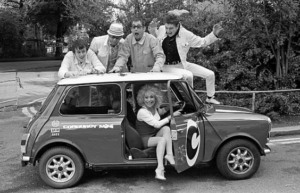 Your next album Out Of Here featured the track Mini. What was, is your favourite mini? New or old shape?

To publicise the release of Mini you met Barbara Windsor. How did this meeting occur? Why didn’t you all appear in Eastenders at the time of the single?

Acid Jazz managed to get a free Corduroy customized Mini Cooper for us to give away as a prize at gig at the Kentish Town Forum; we did as much promo with it as possible before we had to give it away including the photo session with Barbra Windsor. We did 11 minutes of photos, she did her trademark cheeky giggling, said ‘goodbye luvvie, job done’, and left. We didn’t get to go down the Queen Vic with her, but we did meet the cast of Neighbours in Australia, they came to one of our gigs there…drunk all of them.

You also covered the Motorhead track Motorhead. Did you meet Lemmy? Did you ever hear his verdict on the track?

Yes, Lemmy once gave Rich a bass lesson in Britannia Row Studio in Islington; it consisted of turning every knob up to ten apart from the bass control, which he turned down to zero, they then jammed Silver Machine together for a few seconds in different keys. He also played on stage with the Medics at the T&C in Kentish Town (aka The Forum), it was a super group featuring The Damned as well as the Medics, on a twenty minute version of Gloria. He heard our version of Motorhead, but I don’t think he purchased a copy 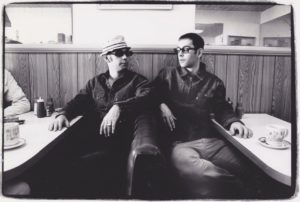 Japanese tour memories, being chased down Tokyo streets by about a hundred schoolgirls after a record store public interview- we were in our 30’s and not as fit as they were. We played Japan 6 times, on one occasion we made a TV advert in which Simon drove an Austin Martin DB5 (he didn’t have a driving license), Rich flew around in a helicopter and Ben appeared from a lake in a wet suit with a tux underneath. We were then filmed being fed ceremonial food of dried frogs, snakes and wasps.

I hope you don’t mind me jumping forward abit to the new record. There was various flirtations with the Corduroy brand in the months and years before you announced the new album, what with playing the odd gig in London and Corduroy Industries releases. How long did it take for the Return of the Fabric Four album to come to fruition?

We were playing gigs here and there, mostly the early Acid Jazz material, we wanted to play new tunes so the idea of a new album obviously popped up frequently; Acid Jazz were of the same opinion (Rich worked there). After a few initial chats we spent about 3 months working on ideas, which we shared individual home demos with each other via a virtual cloud, then worked on them properly when we’d all get together, Ben lives in Germany so it took about six months on and off, recording three tracks at a time.

How long did it take for the album to be recorded? Where was it recorded? Will there be further releases by Corduroy?

The album, our 6th, was recorded with Andy Jones in his south east London’s 2 Bit studio, with the invaluable help of Dougal (Ray Davis’s guitar helper). We wanted the album to sound as if we banged it out in a couple of takes, like our early albums, which is exactly what we did. We demoed more tunes that didn’t make the album. Another album is possible, lucky seven and all that.

My favourite songs on the album are Return of the Fabric Four, Saturday Club (which has a slight 60’s The Who feel), Waltz for Christoph and The Slingback Solutions. Can you tell us anything about some of the songs?

Return Of The Fabric Four is the theme to the album, so we wanted it to sound filmic. Saturday club was originally called Paul Frank (US clothing label) written for the brand around 2006- they never replied. It was a little more Stooges influenced at first but we thought with a little work it would work for this LP as a generic celebration of the weekend.

Slingbacks Solution refers to girls dancing in those shoes and was generally inspired by Jimmy Smith and Lulu.

You have played the Shiiine On festival last year. Will there be further festival appearances this year? Are you going out on a nationwide tour to publicise the tour? 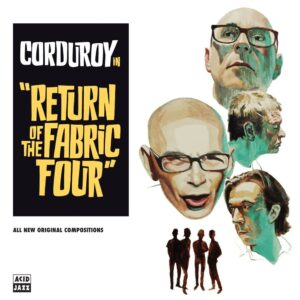 We are hoping to do lots of shows to promote Return Of The Fabric Four, some festivals would be nice; keep an eye on the events section of the Corduroy Facebook page for details.

Finally and importantly. The Saint or 007? 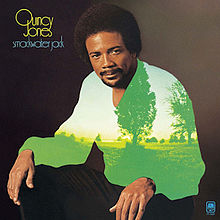 The Who – Who’s Next 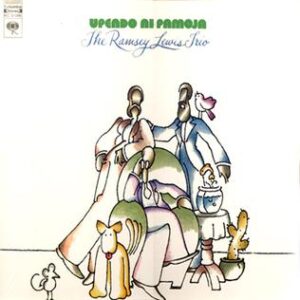 Queen – A Night at the Opera