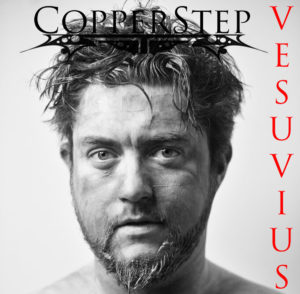 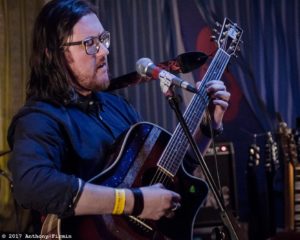 Alt-folk meets progressive rock in the powerful tunes of CopperStep – the artist name of Adam Snape, a singer-songwriter and musician from Manchester whose EP ‘Vesuvius’ is out now. Louder Than War’s Emily Oldfield had a listen…

As the title suggests – and music captivatingly conveys – this is sound with historical depth. Indeed, it’s a welcome change from overtly-indulgent content projected by the artist’s ego – a point which weighs down a good deal of prog rock music. CopperStep instead shows a great sense of adventure and actually addresses that point, advancing between characters and scenarios in a highly varied five tracks.

The opening ‘Tour Of My Island’ starts with an atmospheric judder before a flash of guitar and grounding drumbeat, co-ordinated creatively in the mix to still allow CopperStep’s vocals to stand-out over the top. Thanks to additional musicianship and production from Chris Guest, it’s a progressive piece which works through motifs of travel and turns them over, expressing ‘no speed cameras’, ‘no give way’ which adds to the mood of exploration beyond conventional barriers – just like Vesuvius, the infamous mountain which erupted in AD49, spewing out carnage, as well as its own myths and legends. It works well in turn as a mood-setter for an EP which takes us on an unconventional journey.

Lyrics like ‘kaleidoscopic waterfall’ may seem bizarre at first, but make more sense as we are invited into the world of CopperStep. How? His vocals billow and boom over themes which incorporate location, weather, the elements – and voluminous guitar adds to the visceral effect. It’s an island tour which is enjoyable to take, that’s for sure.

‘Like looking over the edge of the volcano of the self’

And even though it’s an adventurous journey, it is clear that CopperStep knows where he wants to take the audience – to the extent of their awareness, like looking over the edge of the volcano of the self. The content of these tracks is crafted to make the listener look to themselves, as well as at the characters within. ‘Shadow Soul’ is a lengthy track which allows us to do this, opening up with confident electric guitar with dystopic spiralling notes in the background, speaking of ‘cracking knuckles’ and ‘rolling eyes’ which intensify the reflection of ‘Make me feel the criminal’.

A key quality of CopperStep’s music-craft is the progressive build behind the tunes and whilst he dwells on ‘emotional vampires’, the drums come in yet keep a cymbal quality – therefore avoiding overt heaviness which can weigh down rock tracks and instead adding uplift. The ability to convey dark and deep subject matters with a real range to the instrumentation, highlights the ‘Jekyll and Hyde’ quality of human characteristics – conveying that the artist is capable of experiencing an array of emotions which can be expressed through music, if not in person – summarised in the lines ‘double negatives everywhere’. Duality done well.

‘The emotions behind an eruption, perhaps’

In this track I particularly enjoy the intersection of growling, almost grungy guitar which gives way to a kind of soliloquy, seething over how ‘sighs drag down the carrion birds’, thickening to a kind of mumble – which is fitting considering that the guitar grows to become more epic in the background. The emotions behind an eruption, perhaps.

Casanova Pale follows, opening with a siren-like wail and intermittent pounding on the drums before the bold, accusative lines which sting – ‘how can you bear not to be in my company?’ It certainly is an unusual opener. If just taken at the lyrical value, this would seem like an unsteady lurch into narcissism, but when considering the themes of the EP, it actually stands up as an exploration of a historic figure of self-indulgence… and may well apply to more than a few people we know ourselves.

Striking themes of self-absorption are well-conveyed to the listener with clever rhyme ‘you should be here now leaning on me’, and evidently is a track personal injury, not just ego, as a vocal trill turns out an ironic character, accompanied by a wash of guitar in the chorus which blends to a scream in the second round. A mind-set stood up and exposed.

Track titles can be misleading though– and before I heard ‘Sweat Your Mettle’, I anticipated a thrash-heavy track – but I was wrong. It is a tune actually showing more musical versatility – especially in terms of guitar – with carefully crafted notes of acoustic over electric flourishes. It seems suitable for conjuring up the metaphor of a candle for the meaning of human emotions – ‘if your only heart, has burnt out again’. This is a highly imagistic and reflective track which adds welcome variety to the EP and allows us to consider the emotional resonance of the rest of the tunes too. The lines linked with half-rhyme ‘under velvet blanket nights we bring your daydreams to life’ is especially evocative.

What also are notable in the EP, are the historic allusions added in. In some places it is more effective than others – and I think it is timely in ‘Sweat Your Mettle’ as CopperStep elaborates on bayonets and shields, along with soaring vocals, which show a musician ever-ready to keep surprising us.

The quality of surprise isn’t always effective though – and initially I thought this may have been a point playing on the final track of the EP ‘On Telegraph Hill’. It opens effectively with the sounds of sea, birds and a blissful chord progression which seems to be another flourish in CopperStep’s favour – though at a clash with the content which elaborates on a ‘battle of the sexes’ calling on popular culture like ‘bigger than Star Wars’.

I am not sure these allusions are as effective as they could be, but the track builds to expose a soundscape of great importance, as the vocals take us to the imagistic ‘Copper stepping on telegraph hill’. We have moved from imagery of mountains and volcanos, to hills and telegraphs – a sign of society, of times, changing.

In this final track there is turbulence – a profound emotional point – as imagery of pathways, electricity and a real sense of intensity accumulates with guitar that grips you almost celebratory with its spiralling heights. Having reached a peak, it peters out with gentle keys which initially left me thinking – new way or rock cliché? I vouch for the former.

A new way I think CopperStep ploughs, as pulling prog rock together with the lore and sensitivity of folk, means that the tracks have a real air of freshness to them and still have enough attitude to bite the ear. Experimental in places, but a refreshing take which jumps between genres.

Something really worth getting into and listening through. Be immersed.

And his new single ‘Stone‘ is out NOW.