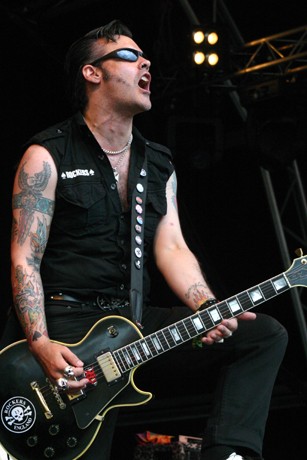 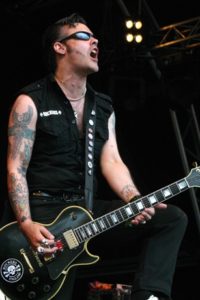 In conversation with Johny Skullknuckles of The Kopek Millionaires

LTW’s US based writer Marc McStea, came over to the UK in early summer; he attended the 2018 Strummercamp Festival, which takes place in Manchester; one of the bands he was particuarly taken with were The Kopek Millionaires; having initially made contact he continued the conversation once he had returned hom.

Although they’ve been active for quite some time, I’ll come clean and admit that I only just discovered the Kopek Millionaires at this year’s Strummercamp Festival. They were playing at the aftershow event, indoors at Oldham Rugby Club. For me they were one of the highlights of the weekend. They had all the ingredients of classic punk rock’n’roll with a touch of glam. Mainman Johny Skullknuckles on vocals and guitar is clearly the focal point. With great songs, playing and image, it seems that maybe the only thing that could stop the band achieving greatness is perhaps their own reluctance to get down and dirty with the grim everyday realities of plugging and pushing your band at every opportunity. Johny has been active in a number of notable bands over the years and when not plying his musical wares can be seen in the Rockers England shop in Oldham Street dispensing a wide range of cool rock‘n’roll approved clothing, footwear and accessories – for men and women – plug over!

Although it’s a couple of months since Strummercamp, that was where I started my discussion with Johny, wondering how many times he’d played at the festival.

JSK: “This will have been The Kopek Millionaires’ third appearance at a Strummercamp event, and I have also played it a few times with Goldblade many years ago. I like the friendly, almost family vibe the festival has, and also the fact that it is independent – no sponsorship, not corporate in any way. They do not put Strummercamp on to make money. They put it on for the love of the music. Everyone who has anything to do with the organisation of the festival seem like really nice people.”

I saw them in the cram packed bar after the main part of the show had ended – I think in a way it was probably actually a better venue for the band – having the feel of a traditional cramped, sweaty club rather than the almost rustic vibe of the events in the main tent. The band got a great reception – were you happy with the response?

JSK: ”Really happy! I thought we went down really well, and more importantly, perhaps, we really enjoyed the gig. It amused me that we had so many kids dancing at the front. I was singing the song ‘1981’ (my equivalent of ‘Summer Of ‘69’), and laughing inwardly, thinking that they were not even born then.”

I thought it would be interesting to do a little bit of backtracking to the first bands you were in:

JSK: ”Circa ‘82 to ‘86 I was the bass player at the tail end of Sacred Alien, and from the ashes of them I formed White Trash along with Sean Canning (Sacred Alien singer) later recruiting Big Al Ecclestone on drums and Steve (Ghost) James on bass.”

Surprisingly, we both had a stint – at different times – as guitarist for Jayne County, although Johny’s tenure was quite a bit longer than mine!

JSK: “Her manager, Warren Heighwey, was the manager of the two bands that I’d been in. I learned some songs and did some studio work (guitar, programming and production) that appeared on some compilation or other, but no live shows ever materialised for the period I was actually her official UK guitarist, shame but there you go. I moved to London in 1986 but found it very hard to meet people I actually wanted to be in bands with. I really did not do anything worth mentioning (a London version of White Trash that were OK) until a rock/rap crossover project called Narcotic. Sadly we were managed by a guy who had a Malcolm McLaren obsession, but his efforts at creating a new industry monster came to nothing. During this time, I worked at Kensington Market (when it was still cool), Our Price Records (never cool) and Marcus Recording Studios in Fulham. In 1996 I moved back to Manchester, got my teaching qualification and just played in various bands with old friends until joining Goldblade.”

Johny appeared on the Goldblade albums ‘Rebel Songs’ (2005) and ‘Mutiny’ (2008), leaving the band in 2010. There was a bit of rapid-fire musical chairs after that with a spell with Texas Terri, The Anti Nowhere League and then in 2011 an unlikely period with London based Oi originals The Business. Unlikely in terms of image rather than musically – as the common thread running through Johny’s various alliances is that it’s always been about straightforward rock’n’roll. 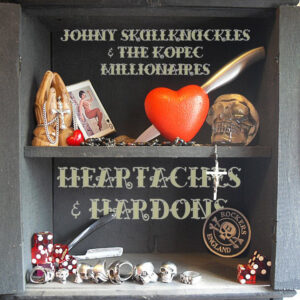 2012 saw the first release under the Kopek Millionaires banner – ‘Heartaches and Hardons’. Like all of Johny’s music it’s straightforward R’n’R with enough of a sense of humour not to take itself too seriously. This release also saw Johny take over vocal duties for the first time.

JSK: “I had sung on demos in the past but the first Kopek Millionaires’ release (intended to be a studio project only) was my first time as lead singer and subsequently (when we eventually did a gig) first time as a front man. It was an odd transition as I have only of late learned not to hate the sound of my own voice and was unsure if I had the charisma to front a band, luckily, I think I have got away with it so far.”

Had he always been a frustrated singer?

JSK: “No, I have always been happy playing guitar and prior to that bass, but I wanted to challenge myself and when the Kopek Millionaires was in it’s infancy it seemed natural to sing the songs seeing as I had written them. Also, lead singers are hard to find!”

How about the extra responsibility fronting things brings?

JSK: “That is the downside to being the singer. If you have a shit gig it reflects on the whole band. For instance, yesterday at rehearsal I lost my voice (I already had a cold) and later today we are playing the Glaston-Bury Bury festival so I will be gargling with warm salt water all day hoping that my voice will hold for the 40 minutes set. Not a fan of the responsibility.”

How do you feel about the control you have in your current situation compared to playing with a band that’ve already got a guaranteed audience, but you don’t call the shots? Is that a plus or minus?

JSK: ”A bit of both. Musically or ‘artistically’ (if that doesn’t sound too pretentious) I am the happiest I have been since the old White Trash days. I write and record whatever comes out. The good thing about the name The Kopek Millionaires is that it does not sound overly genre specific, so it leaves us free to have greater variation in content. For example, on ‘Hopes & Dreams & Goldfish’ there are punky pop songs, rock songs, glammy songs a heavily trip hop influenced song and even a folk song. On the transverse it falls to me to steer the ship which as discussed earlier I am not that good at on the whole, but the guys in the band are great and help out a lot.” 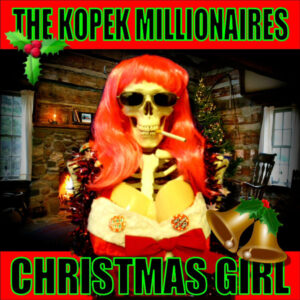 What’s the songwriting process in the band?

JSK: “Currently I’m writing on my own. There was actually no band when ‘Heartaches and Hardons’ came out so I had no one to write with. Also, I tend to write all my songs in my head and often only touch my guitar once they are more or less fully finished. I am happy for anyone in the band to write songs as this would again widen the palette of styles. For my part, I love following the song writing journey from first idea to finished item – it’s a real buzz. Along with recording and producing it’s my favourite thing to do. At the moment I have about 16 songs finished, written and recorded (just my recordings not the whole band, that is the next step). I have probably another 10 songs floating around half finished. We are planning another 7 track mini LP soon (We have been planning this since October 2017 but for various drummer related reasons it still has not happened) but it will be released hopefully later this year.”

Finally, why the name ‘Kopek Millionaires’?

JSK: “The Kopek is a subdivision of the Rouble. Roughly a Rouble is worth 0.012 of a Pound Sterling. There are 100 Kopeks in a Rouble, so you can be a “Kopek Millionaire” and still have fuck all!”

The Kopek Millionaires are currently looking for management – anyone out there looking for a great rock’n’roll band with style, charisma and of course great songs can get in touch with Johny via the bands Bandcamp page.