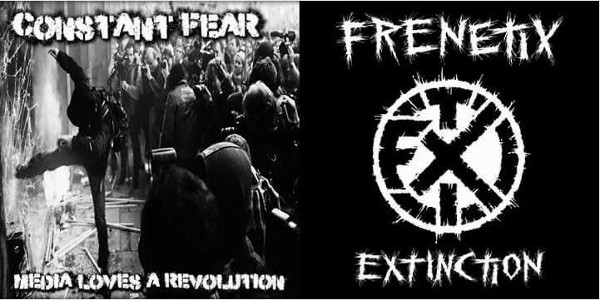 A split album from 2 Glasgow punk bands gets the Louder Than War treatment from Nathan Brown.

One city, two bands, nine tracks but only one singer!  The man in question, Joe Fear, aside from playing in Constant Fear for at least 10 years (probably more) has previous form singing for Disaffect who were a fine anarcho-punk band in the early 90s whose records would spend days on my turntable.  You would think that perhaps 2 bands with the same singer would sound too similar, but it appears Joe has 2 settings on his gravelly voicebox.

Opening up with a track titled Millions will die for billions in arm deals, it is clear that Constant Fear are not the sort to hint at subject matter and write ambiguous lyrics for us to ponder the meaning of.  The song itself – both in its music and the relentless vocal attack – put them in the same camp as Icons of Filth.  This is not a comparison I would ever make lightly!  We are talking driving punk with an anti-war, anarchist message.

Constant Fear have a slightly metal edge to them which is mainfested on Internal Darkness through the galloping rhythm and dual guitar leads. A song about mental anguish, the slow middle eight has a sinister edge with the intonement of “Welcome to my internal darkness” in an almost demonic voice.  Media Loves A Revolution sounds like much of the bands excellent album What’s Next from 2013 and also has shades of The System’s Warfare EP, and Conflict (from The Final Conflict era).  Returning to a familiar theme  Unforgiveable is the band’s judgement on the horrors of war.  A military snare roll and guitar leads into a chuggy number with a little more of that metal touch. Drummer Craig – who is a site to behold in a live situation – is kept busy on this one with doubled up tribal drumbeats throughout.  The female vocals on the chorus provide atmosphere and the contrast with Joe’s vocal and the ferocity of the music act as a magnifier to the intensity of the song.  Sometimes light produces more shade.

Frenetix appeared in my Facebook feed some time over the last 6 months or year.  I can’t tell you much apart from the fact that Joe from Constant Fear sings for them and while they are a new outfit, I am sure someone told me they were a band back in the 80s.  But don’t go quoting me on that!  Beside which, does it matter?  New or old, this recording is new and now.

Their intro track features a long sampled speech about the way humanity abuses animals over squealing guitars and pounding drums reminiscent of mid 80s anarcho punks such as Liberty.  The theme of environmental destruction continues in the next song.  Extinction kicks in with a metal guitar riff and grindy bass, that is perhaps inspired by those who’ve balanced on the metal punk fence before like Amebix, Nausea and early Hellbastard.  The chorus is straight up punk though. The guitar break is pure unashamed metal with a couple of licks that reminded me of Jap metal punks GISM.

No Pasaran should need no explanation as the cry that went up among Spanish anti-fascists in the 1930s civil war and has been adopted ever since by street fighting antifa.  A chunky, speedy, belter of a song with a distorted vocal it’s a definite head nodder.  Original Sin is a rejection of the concept that underpins much of the Catholic church’s teachings.  Church bells and wind are used perhaps a little too often and can become cliched but I forgive it in this case as there is a genuine context.  Plenty of wailing lead guitar adds texture to the song. The hammer-on fest in the middle eight and towards the close of the song reminds me of 80s cross over and that point when Broken Bones stepped over that line into full on metal.

War Machine is a very Discharge style number in musical styling as well as lyrical content.  Like No Pasaran earlier it is proper chunky punk with only a little lead guitar in it.  Cleverly alternating the chunky punk rock numbers with the more metal guitar orientated ones, Frenetix provide variety in their approach.

Released as a CD on Shatterpunk, Let the Bastards Grind and Noise Noise Noise this was a pleasure to listen to and a purchase I’m glad I made.  Always pleased to see Constant Fear live, on the strength of this offering I hope to catch Frenetix one day too.  I believe that the download will only appear once all 300 physical copies have been sold.

Constant Fear and Frenetix can both be found lurking on Facebook.