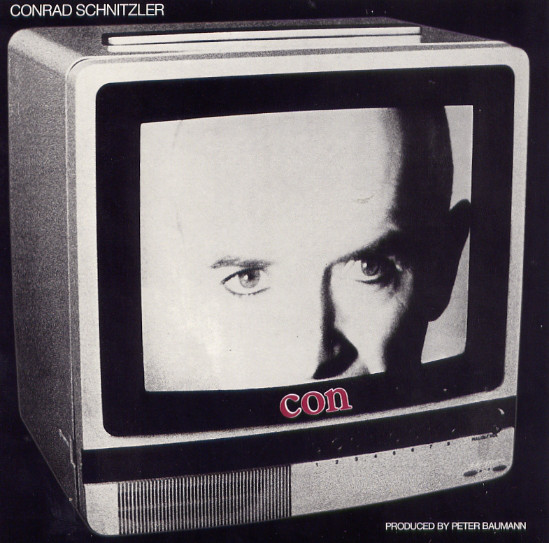 “The sounds don’t come to stay”. Thus sprake Conrad Schnitzler in his Context manifesto. Yet, given the amount of reissues and remixes the arch experimentalist is subject to, these sounds seem to do their damndest to do just that. From Stunde null to Stunde für immer… This “remix of the forever fleeting” has pedigree for him, too. It was brilliantly heard on the last release of Schnitzler’s lifetime, 2012’s Endtime; which neatly moulded his artistic output together in one gloriously flowing electronic dream.

Schniztler’s 1978 release, Con, remains a stone-cold classic; a beautiful record operating just outside of time and space, mining sonic ideas that are equal parts hobo and rebel academic. It’s now reissued by the head label Bureau B; alongside other more contemporary deconstructions of other Schnitzler works by old DDR experimentalist, Frank Bretschneider – entitled Con-Struct. Both are essential furnishings for your pad.

Con was recorded by his fellow T-Dreamer Peter Baumann, in the Paragon Studios in Berlin. Somehow the weightless quality of early, pre-Virgin records T-Dream finds a place on this LP, especially the opening couplet, ‘Electric Garden’ and its poppier cousin ‘Ballet Statique’; both of which are brilliant suspensions of time. In the opener a plaintive synth wail keeps the listener on tenterhooks, whereas the latter trades in a gloriously hypnotic melodic loop.

Schnitzler’s music never ages, primarily, one feels, because he never bothered to play, or get hung up by the absence of any “pop music” game. But it would be wrong to see his output as totally removed from its time. The five tracks are very much of their time: ‘Zug’ is a nod, I suppose to all that “travel music” that was then being made in Germany… Given the feeling of disconnect between the tonal synth washes and the clattering beat, it’s an insistent, but utterly spacey paean to the iron horse. In that respect, given obvious similarities in subject matter and rhythmic pattern, it doesn’t feel especially related to Kraftwerk’s.

The spaciness is heard at its peak on the last two tracks, ‘Metall I’ and ‘Black Nails’, both of which (and sorry to do this again) take Kraftwerk’s ‘Mitternacht’ from a layby in the Hartz mountains to an isolated spot in off the ring road in Friedenau; just to break down with a tape recorder for company… 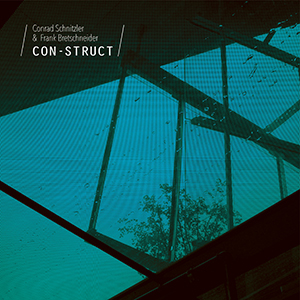 With Bretschneider the approach is at once much more confrontational, from the opening clashes of ‘Klirrfaktor’ you feel you are tuning into a sort of Kiefer-esque deconstruction of history; the artist getting his fingers dirty from the beginning. Even so, you feel Schnitzler’s shade is present to steer things towards the way he would have wanted it. This means imposing a sort of continuum and a preternatural silence that Bretschneider seems quite happy to encourage. You can hear this on the often symphonic “rave-in-miniature”, ‘Hysterese’ and ‘Schwingkreis’. But what is most noticeable is that the cut-up, collagist nature of these tracks is key; for instance ‘Gegentakt’ and ‘GegenKopplung’. Listen to the funny way Bretschneider makes the melody run awkwardly up some stairs and pass out at the top in the latter; courtesy of some radical cutting.

Con-Struct often feels like it’s the offspring of two strong personalities who relish a standoff; it can be clearly heard on the funny, bubbling ‘Emitterfolger’ which can only do so many academic blurts and squeaks before it surrenders to structure of a sort. Then there are cuts like ‘Phasenschieber’ and the gloriously seedy ‘Grenzfrequenz’, both of which impose a very strange calm in what may be a creative no-man’s-land between the two men. For sure there are obvious Schnitzler patterns here, but the way the track is “moulded into a track” feels more like something emanating from Bretschneider’s hand.

It is noticeable that Bretschneider does his best to set this record up as a show, with a big bang at the end. The end-build begins with the superbly tense ‘Ruhestrom’ that seems to distort the themes we heard on ‘Black Nails’ into a more nightmarish vision. ‘Vierpol’ sounds like a continual changing of TV stations in an empty hotel room. Finally we get a mini-rave courtesy of the gloopy, itchy ‘Monoflop’, which has something of Toulouse Lowtrax about it.

What a way to go out.

As said earlier, if you like uncompromising electronic music, then you need to listen to these two records.