Synchronised dancing, gym kits, veils and some of the best pop songs of 2017 – Confidence Man provide an intoxicating live experience like few others to warm a cold night in Manchester. 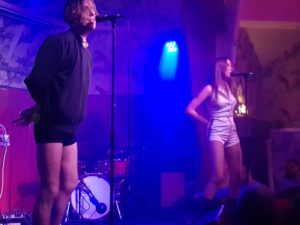 Of all the live musical highlights of 2017, the sight of Confidence Man tearing up the Crow’s Nest tent on Thursday afternoon at Glastonbury remains boldly embedded into the mind. The Australian outfit have risen from nowhere on the back of some tremendous singles and a live show that positively sizzles with engagement and energy and such has been the response of the UK to their shows over the summer, they have already gathered a significant following of devotees, drawn to their unique energy and engaging live show.

Tonight at Manchester’s Deaf Institute, the weather is freezing, damp and cloudy – so far away from the scorching heat of that June day, and miles from the summer climes of the band’s Brisbane hometown. But stepping into the venue, these worlds blend into a lurid bake of sound and energy. Opening DJ Kath McDermott gets the atmosphere exactly right with a pin-sharp set of electro and dance-honed bangers that work the room up into a sweat and an expectation.

For those who have never seen Confidence Man, they effectively split into a front desk and back room operation. The backing musicians Reggie Goodchild and Clarence – black clad and veiled – hit thundering banks of drums, synth loops and samples to stir up a wave of clattering, stuttering and compelling grooves and sounds. While at the front, there is the twin tag-team attack of vocalists/dancers/exhibitionists Sugar Bones and Janet Planet. What they do will be familiar and adored by those who have seen them over the summer, though to explain to the uninitiated is tricky.

Let’s give it a try…

They operate like dual personalities from the same hyperactive, intoxicated mind. Jerking dance moves like puppets on strings. Aerobic moves – set off by Sugar Bones’s school PE kit outfit of short shorts, tennis jacket and plimsolls. The occasional lascivious twists, leans and (at one point) intimate self-manipulation of Janet. Their double-act is brilliantly delivered, constantly engaging and one of the most unique displays of stagecraft that has been seen in recent years. It is simply hypnotic to watch – a whirlwind feeding on the energy of the crowd.

All this visual endearment however, would be a fleeting fancy if it wasn’t for the songs. And Confidence Man deliver equally when it comes to their scattergun pop concoctions. From the opening duo of Catch My Breath and Bubblegum, to a storming Boyfriend (Repeat), the quartet have a terrific knack of combining dance, pop, seduction and indifference into three-minute vignettes that tunnel into your consciousness. As we all crouch on the floor at Janet’s command, only to spring back into the air for a rousing, mosh-pit finale, the compelling spell of the band is over us all. Their meteoric rise over the last year shows no sign of slowing down, though the only concern would be whether the thrill and intimacy of their live shows can be replicated on the bigger stages that they are undoubtedly heading for. But for now, they really are one of a kind. One of the best live bands of the year, with some of the best pop singles of the year – 2017 truly has been Confidence Man’s year.

All words by David Edwards. More writing by David Edwards can be found at his author’s archive at https://louderthanwar.com/author/david-edwards/ He ventures through the waters of Twitter as @albion1981