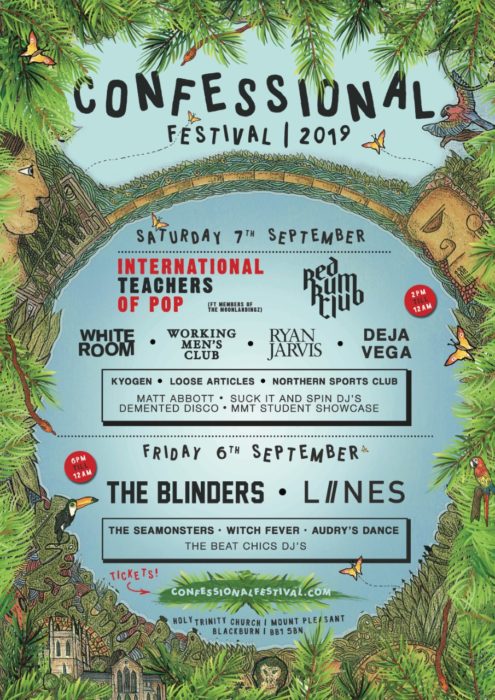 Friday 6th and Saturday 7th of September sees the return of Confessional Festival to the disused Holy Trinity Church on Mount Pleasant, on the outskirts of Blackburn town centre, for its fifth year. Extended to two days for the first time, the festival plays host to many of the country’s best up-and-coming bands in a unique setting, and with a wonderfully chilled-out vibe that you don’t get from traditional festivals.

The festival is the brainchild of Pete Eastwood, a music fan first and foremost, determined to revive the music scene in Blackburn and rescue it from the clutches of tribute band hell. Pricing the tickets at an incredibly reasonable £10 for the Friday, £20 for the Saturday or £27 for the weekend, as well as providing discounted tickets for 13-17 year olds of £5 and 6-12 year olds of £3, the event is aimed both at lovers of original live music and families.  Working with Nicola Simcox of Good Ears, who worked on Ramsbottom / Head For The Hills Festival for many years, and with the support of Arts Council England, the line-up is full of bands that fill much bigger venues just thirty or so miles away in Manchester and further afield.

Previous line-ups have included the likes of PINS, Cabbage, She Drew The Gun, Ist Ist, Bang Bang Romeo, Trampolene, No Hot Ashes and The Tapestry, but 2019’s expanded line-up promises to be the best yet.

We take a closer look at some of the bands appearing at the festival :

Their Friday night headline set will be one of their last of the Columbia era before they head into the studio to record their second album, snippets of which they’ve premiered at shows over the Spring and Summer, including a stunning stripped-down set at Blackburn’s Night At The Museum in early August, run by the folks that put on Confessional.  The church is a perfect setting for their musically and lyrically challenging songs and will provide them with a dramatic backdrop for the likes of their singles Brave New World, Rat In A Cage and L’Etat C’est Moi as well as new tracks like Forty Days And Forty Nights and The Writer which have already become established live favourites.

Also on the Friday are Manchester trio LIINES who’ve been making waves this year with their tour supporting Sleaford Mods and their 6 Music and Radio X championed single On And On. They’re another band transitioning from their debut album – last year’s immense Stop / Start – to thinking about that difficult second album. With a recent triumphant show at Yes and an already sold-out show at the Night And Day in October, it feels like the constant championing of them from sites like ours is starting to pay off. With Zoe on guitar and vocals, Leila on drums and Tamsin on bass, they pack an almighty punch for a band that doesn’t deal in niceties, but hits you straight between the eyes with a full-on assault.

Their debut single Bad Blood was play-listed by 6 Music for several weeks and their follow-up Teeth is treading the same path. Recently signed to Heavenly Records after a label tug-of-war for their services, the four-piece have been on a seemingly endless cycle of gigging, paying their dues ahead of their own debut national tour later in the year. Fronted by Sydney Minsky-Sargeant, who exposes views on social and political issues of our time and takes aim at institutions like the BBC, they also possess Giulia Bonometti in their ranks who has a side career as Julia Bardo. Ridiculously talented with a disdain for much guitar music of our time, they’ve had all sorts of comparisons thrown their way, but they need to be witnessed live for you to make your own mind up.

Déjà Vega are a band with an unstoppable momentum behind them. With their debut album canned in 2017 due to record label problems, they responded in the only way they know – by ratcheting up their scintillating live shows even more notches. It’s live where they are at their best, and threaten to blow any other band on the bill with them off the stage, and more recently people seem to be finally realising this – their Gullivers show in Manchester sold out in a few hours and their February 2020 Deaf Institute show is likely to sell out in the next couple of weeks as well. The three-piece, featuring Jack Fearon on guitar and vocals, Mike Newton on bass and Tom Webster on drums make a ferocious noise with power, control and adrenaline-fueled precision. Bring your earplugs.

Sheffield’s The Seamonsters might not pack the powerful punch of many of the bands around them on the bill, but they’ve got other means at their disposal to win you over. A five-piece gang in the truest sense of the word, they’ve promised to bring new material for their September and October tour dates that include Confessional. Fronted by Naomi Mann’s ethereal vocal style and inspired by the 80s and 90s synth-pop sounds of their home city, many will already have dismissed them and under-estimated their ability to let loose and create their own brand of chaos.  Their last single Blue Movie Baby though shows them to be real contenders and their Friday night slot at Confessional is certain to win them more admirers.

The Scousers have already made their mark in 2019 with their debut album Matador and a trail of uplifting live shows across the country, which has cumulated in them selling out their hometown O2 Academy venue months in advance. Describing themselves as “combining sounds of old and new channelling ‘Tarntino-esque’ wild western vibes with the help of a solitary trumpet” and with the charismatic Fran Dolan at the helm, they’re certain to bring a party atmosphere with them – the likes of Would You Rather Be Lonely, TV Said So and Calexico are tailor-made to get an audience going whether they know of them before or not.

John Robb described Witch Fever as “raw, in your face and making a glorious and beautiful racket, are full of explosive and kinetic energy and collapsing new riffs and are going to make a noise musically and culturally…” and Amy, Alisha, Alex, Annabelle have certainly lived up to that billing with shows that included a recent performance at Manchester International Festival that drew universal acclaim.  Angry, honest and from the heart, Witch Fever are sure to be one of the highlights of the festival.

Saturday night’s headliners promise to bring the party to Blackburn. Describing themselves as “nerd disco”, International Teachers Of Pop is the side project of Adrian Flanagan and Dean Hone who are founders and co-writers of The Moonlandingz with the vocals of Leonore Wheatley and they released their self-titled debut album earlier this year. Expect a colourful stage show and a celebratory atmosphere to bring the festival to a close.

With the likes of Ryan Jarvis, Kyogen, Audry’s Dance, Loose Articles, White Room and Northern Sports Club on the bill as well as a range of spoken-word poets and DJs, Confessional Festival 2019 promises to be a two-day extravaganza of some of the best new music around in a spectacular setting. This year’s theme is Rainforest so the Confessional team have already been hard at work decking out the church accordingly with help from local schools.

The event will have a Confessional Bar run by Q Ale Bar Hire, and also a can bar run by Cherry Tree Cricket Club as well as food from Taste Revolution and the award-winning Piemezzanae. There will also be live screen printing, a record stall (Hebden Bridge Records), a vintage stall and media make-up.

Tickets for the weekend are available via Fatsoma.  The festival has Facebook events set up for Friday and Saturday.