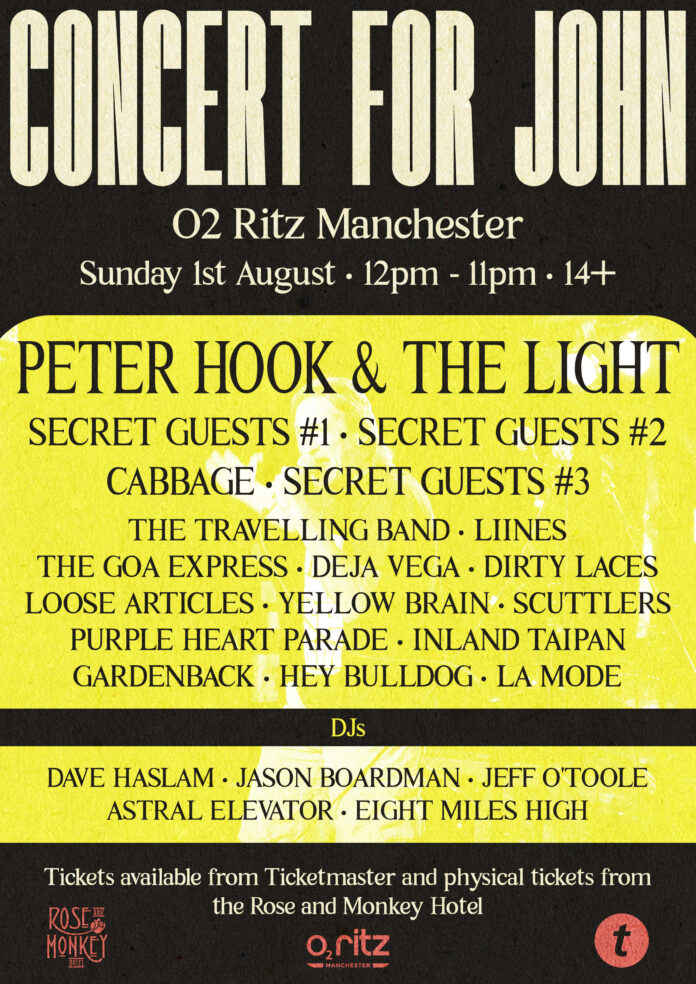 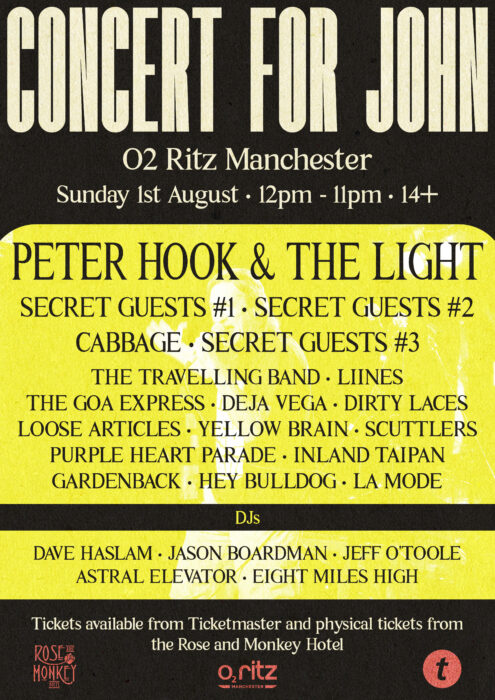 CONCERT FOR JOHN
Sunday 1st August
02 Ritz Manchester
The city is coming together to celebrate our legendary friend John Hall. John has fiercely supported so many artists over the years and we are throwing a huge, all day party over two rooms with bands and DJs all day, showing our support to him.  All profits will be donated to The John Hall stage. This is a new charity which John wishes to be set up that will support grassroots musicians and venues. The charity will be hiring city centre, clean rehearsal space, free for new bands.
For those who don’t know John Hall, you probably do. He’s probably been at a gig near you somewhere if you support the unsigned grass roots bands of our creative city. He also played an instrumental part in evacuating people from the flats above The Arndale Centre when the bomb devastated the bottom of Market Street back in the mid 90’s. I bumped into him about four years ago before a Blinders gig and I can honestly say I’ve not met many music fans with the enthusiasm and passion for new music like him. He’s a shine of light on the music scene with a massive heart and a genuine love for all things music. A collection of old ticket stubs going way back in history that any collector would drool over. A proper character who instantly charms his way into your life after your first meet. I swear he told my gig buddy to shut the fuck up at an Evil Blizzard gig in Preston! Oh, the irony! The line up for this gig just shows you the respect he’s earned along the way from the likes of Peter Hook, Dave Haslam, Jason Boardman, Cabbage, Scuttlers, Dirty Laces and Deja Vega from Winsford who he has a massive soft spot for. I can’t name them all but apparently hundreds of bands were offering to play this special night. It’s a poignant event that is going to pull on the heartstrings of the local music scene. I’m choked writing this. On the 2nd July John announced the terrible news and the love and support has been amazing.
“I have oesophageal cancer, it’s spread in the blood to my liver, inoperable, terminal… I have been given 4 months to live . Details of wake (which I will be at hopefully) on 28/8 to follow. Stay cool and love one another.”
He’s going out with a bang not a whimper by the looks of this stellar line up. There’s more to be announced and from what I’ve heard it’s worth the entrance fee alone for one the bands that are nice enough to give some of their time to a party animal who will party wherever he ends up on his musical journey through a wonderful life. We love you John!

Physical tickets available from The Rose and Monkey Hotel.
Words by Wayne Carey, Reviews Editor for Louder Than War. His author profile is here