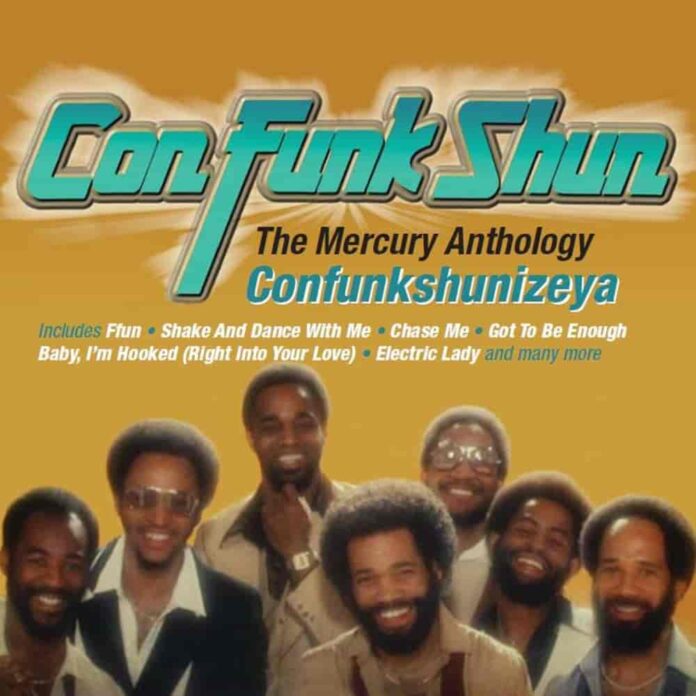 Best Of 2CD set which includes many of the US r&b chart hits of Vallejo seven-piece outfit Con Funk Shun, drawn from their late 70s/early 80s heyday on Mercury Records…LTW’s Ian Canty climbs aboard Love’s Train…

The roots of Con Funk Shun lay in a band called Project Soul, which was formed in 1968 in Vallejo California as a duo by guitarist Michael Cooper and drummer/vocalist Louis A. McCall Sr whilst they were still high school students. The group quickly expanded with the additions of bass player Cedric Martin, Karl Fuller on trumpet, keyboardist Danny Thomas and Paul Harrell on flute. They began to gain a good reputation as a live act and with the final piece in the jigsaw lead singer Felton Pilate II arriving in 1971, they began to make waves locally. The band moved to Memphis in order to provide the backing for a vocal group called The Soul Children, who had some notable success whilst recording for the Stax label. Project Soul worked with The Soul Children for a couple of years, which included playing the famous Watts-Stax concert in 1972.

This link to Stax was important as (one of the former boss of that label) Estelle Axton was impressed by the band and signed them to her own imprint Fretone Records in 1974. At this point they were now performing under the new name Con Funk Shun. They issued corded a couple of singles for Fretone which pretty much sank without trace, plus two unreleased albums that were later put out to cash in on the band’s late 70s success. Con Funk Shun were slowly gathering momentum, but it was signing to the much larger Mercury Records label in 1976 that led to the band really establishing themselves as a true force on the American funk scene. Early on it was slow progress, but a year into their contract they began to make waves on the influential US r&b charts, racking up the first of many hits over the next 10 years. Confunkshunizeya – The Mercury Anthology focuses on this fruitful period, when they were seldom away from those listings and scored some mainstream hits too.

The first Mercury record, the Sho Feels Good To Me single (co-written by McCall’s wife Linda Lou), made an initial breakthrough in 1976 and that, added to the swinging dance moves of Foley Park also from their self-titled Mercury debut album, open up this collection. These early records for Mercury may have made a limited inroads, but with the release of the Secrets LP in 1977, Con Funk Shun really began to make their mark. But it was the very popular Ffun and Confunkshunizeya singles, both included here, that firmly thrust the band into the US spotlight.

Taking its cue from Brick’s Dazz 1976 hit single, Ffun is here in its bouncy and loveable 12 inch version. It was no real surprise when this infectious, cool item became a smash. It went onto become their biggest hit, climbing into the Top 30 on Billboard as well as topping the r&b charts. Confunkshunizeya didn’t crossover to the mainstream, but it was still a percussive wonder with a classy brass sound. Added to the respectable sales of the Secrets LP, this all made for an exciting 1977 for the band.

The Loveshine LP from 1978 would be another successful offering, maybe not quite as much so as its forerunner, but enough to consolidate Con Funk Shun’s status among the funk/dance leaders. Another couple of impressive and listenable singles in Shake And Dance With Me and So Easy were included. So Easy in particular a real dancefloor filler and shows why the band became a favourite in sampling circles with its lively rhythms. The album’s title track, also included here, is a good example of the more relaxed, slower jams that were a second string to their bow.

1979’s Candy collection came hard on the above album’s heals, with it including the r&b chart hits Chase Me and (Let Me Put) Love On Your Mind. Chase Me is as good a dance groove as they ever cut and Love On Your Mind a creamy smooth ballad, but neither made any headway on the pop charts. This must have began to become a source of frustration for Con Funk Shun. The floating, jazz-tinged Da Lady was Candy’s final single and though perfectly pleasant it doesn’t quite do enough and as a result only made a poor showing on the r&b charts. As the 1970s ended Con Funk Shun’s sizeable US success seemed to be bottoming out.

Neverthless the band kept on with their hefty work rate with two albums in the new year, Spirit Of Love and Touch. The former was Con Funk Shun’s last gold record and biggest hit album, making the Top 30 on Billboard. However, the three singles from it failed to crossover from the r&b charts. Following album Touch did have a minor hit single in Too Tight which crept into the Top 40, but the LP itself sold less well.

On this collection three Touch tracks sit at the end of disc one, incongruously ahead of Spirit Of Love’s quartet, which began disc two. Touch is represented here by the title track and the two singles. The tough funk of Lady’s Wild did not do the business chartwise unlike the orchestrated and smooth Too Tight, but I prefer it. Honey Wild, a very soulful dance number from the Spirit Of Love album, has a nice light vocal style which pleases and the full horns and good time dance vibe of single Got To Be Enough is a real winner.

At this time, with their various contemporaries crossing over to have big mainstream hits, Con Funk Shun were constantly updating their approach. Having already incorporated Electro elements into their sound, they began to utilise some Hip Hop rhythms too. They grafted these modern accoutrements seamlessly onto their traditional musical landscape. Although they do sound very “80s” now, the records they made at this time stand up and are plenty of fun to listen to today.

The 7 LP, which followed in 1981, showed signs of this drift. Both the vocoder-enhanced Bad Lady and Body Lovers are spicy electrofunk party music incarnate, with Straight From The Heart one of their trademark lavish soul ballads. The singles did nothing unfortunately, but the four tracks presented here (the aforementioned three singles and laidback with guitar metal riffing California 1) show the band were still to be reckoned with.

To The Max from 1982 made it eight albums in seven years and it reached the top ten of the r&b lists, but again the singles failed to register. Of the three (all present here) Ms. Got-The-Body did the best and arguably deserved better, being a neat combo of their old sound and electronic keys. Away from the singles, the easy feel of Love’s Train is a real delight. 1983’s Fever featured Baby I’m Hooked (Right Into Your Love), which gave them their final hit on the pop charts, albeit only reached number 76. LP opener Can You Feel The Groove Tonight is also included, this is busy synth funk mover that was built for mid-1980s dance floors.

Electric Lady, from 1985, arrested the band’s slow commercial decline to a certain extent, even harnessing a rap vocal on the title track. It was a creditable effort in keeping up with the changing times. Turn The Music Up, also from the LP, is a real electrofunk stomper too. Felton Pilate II left the band before final Mercury long player Burnin’ Love, going onto work with MC Hammer on his mega-selling Please Hammer, Don’t Hurt ‘Em LP. Burnin’ Love was their least successful record commercially, charting far lower than Electric Lady. The only selection for it is the handclapping funk of the title track, which brings the curtain down on Confunkshunizeya – The Mercury Anthology in a suitably party hearty fashion.

Soon after their last Mercury album Con Funk Shun disbanded in 1987, with Cooper leaving for a solo career. However they reformed six years later, though were understandably shaken to the core when mainstay Louis A. McCall Sr was murdered in 1997. Con Funk Shun have managed to overcome this tragedy and remain a strong attraction at their gigs. They also recorded the 2015 More Than Love album plus Your Night and Miss You singles in the same year.

Con Funk Shun may not have the otherworldly allure of George Clinton’s Parliament/Funkedelic axis, or the social consciousness of peak Sly &The Family Stone, but they were/are dab hands at knocking out solid gold dance grooves in bulk. These are much in evidence on Confunkshunizeya – The Mercury Anthology, which has the bulk of their very infectious r&b chart hits (but not all of them) and some slamming album tracks into the bargain. They never had a UK hit like their peers like Kool & The Gang or Earth, Wind And Fire, so their profile on this side of the pond is significantly lower. That is somewhat of a shame, as they were a very entertaining and lively act. Sometimes I feel that we do not give enough value to music that simply makes you feel good. Con Funk Shun and this 2CD acted as a real pick-me-up. Full of good-natured grooves and genuine fun, this is music that could get the most reticent of dancers itching to get out on the floor – and that is pure magic.