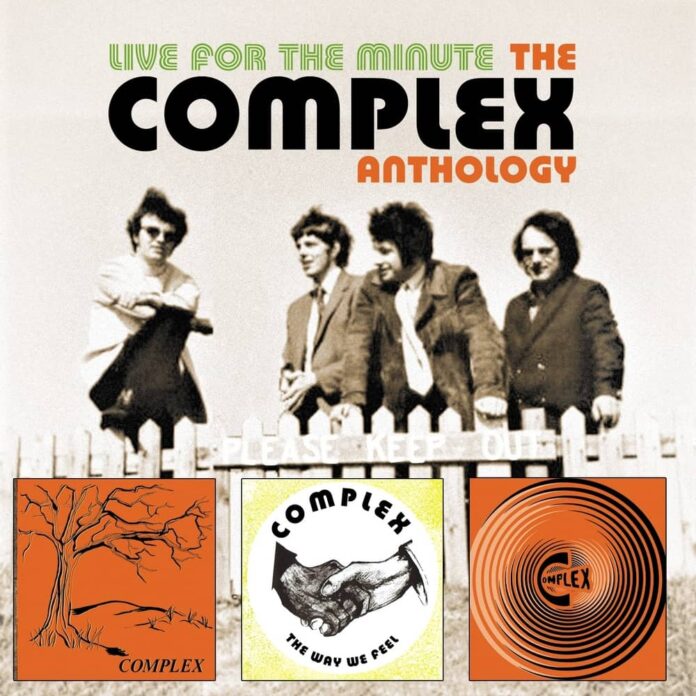 Complex – Live For The Minute 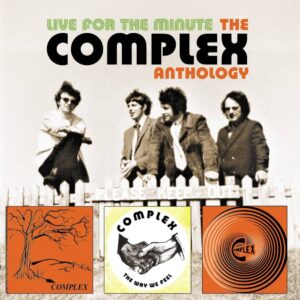 3CD set which anthologises the work of Blackpool-based psychedelic progressive outfit Complex. The collection includes the self-released albums Complex and The Way We Feel, plus recordings from a 1972 acetate and bonus items, many of which are previously unissued. Ian Canty ponders the question deeply before responding…

Seven years before The Desperate Bicycles galvanised the nation’s fledgling punk music makers with the chant “It was easy, it was cheap go and do it”, Blackpool band Complex pressed up 99 copies of their debut album and its follow up themselves (under one hundred discs avoided the need to pay any Purchase Tax). They did so admittedly with the ulterior motive of using the LPs trying to attract more gigs and record company interest, but it was still a bold move. After sending the LPs out to various record companies/gig agencies, the remaining copies were sold for the princely sum of one pound sterling at gigs. The self-titled debut and follow-up The Way We Feel are as a result rare commodities, with an original edition of the first collection being purchased six years ago for a cool ten thousand notes.

Complex started out in 1968, with guitarist Brian Lee joined by singing drummer Tony Shakespeare, bass player Lance Fogg and rhythm guitarist Tony Fisher. Fisher left and after a brief time with Chip Hughes on guitar, he came back temporarily until the band found a suitable replacement. At this point teen whizz-kid Steve Coe joined up and this is where the band really started to take off. Coe, a keyboardist with a developing knack for song-writing in partnership with Bob Mitchell, gave the band the focus that their talents needed.

The sleeve note puts forward the notion that the first Complex album must have seemed thoroughly outmoded on release in November 1970. That may have been the case, but the distance in time between recording and listening means that all these years on it just sounds like good psych pop rendered with a bundle of good-natured brio. The sound quality is a bit thin at times and reflects the basic recordings circumstances. Even taking that into account, the band’s energy and wide-eyed wonder comes over well and is thoroughly disarming. Funny Feeling bounces in on wave of good feeling and the mad, touching Message From The Year 2000 is a delicate keyboard-driven pleasure. Starting with an abrupt change of tempo, Green-Eyed Lucy sets forth as powerful soul psych and shapes up as a really good dance tune. Josie is even a decent stab at the original reggae sound which was just about contemporary to this LP’s recording.

Witch’s Spell’s freaky rush is propelled by a fair measure of Coe’s very garage rock sounding organ tones and the extended keys section on Self Declaration reeks of The Doors. Storm On The Way thankfully has an insistent strut to it that is neat, something that makes up for a pretty naff cloudburst effect at its opening. A slower Mademoiselle Jackie dips into chanson and set closer Live For The Minute has a ton of guitar action and thudding percussion seeing it home.

There are a few dodgy moments on this album (the very earnest Norwegian Butterfly reminded me of Lesbian Seagull from the Beavis & Butthead film!), but in summary Complex’s good natured energy and way with a tasty tune win through. Unfortunately this is not what the band heard when getting the vinyl back from a pressing plant in Scotland. The tapes they had recorded were mastered so low you could hardly hear the band and on turning up the volume to get a better earful, they were almost drowned out by a surfeit of surface noise.

The bonus offerings added to this disc are the two sides of a July 1970 acetate, alternative 1970 and 1971 takes of the album track Green-Eyed Lucy and a 1971 Norwegian Butterfly. Hush, the first track from the acetate, is a cover of the Joe South number modelled on Deep Purple’s version and on the other side Images Blue might just top the take on the Complex LP. The 1971-taped Green-Eyed Lucy has plenty of punch too.

Needless to say the record didn’t quite engender the kind of record company interest that was intended, the blame for which may well be due to the pressing plants drawbacks mentioned above. Not being easily discouraged, Complex pushed ahead and recorded a second LP The Way We Feel in the summer of 1971. Their admirable spirit and energy is well utilised on an up-tempo Every Time I Hear That Song and electric piano forms the intro to a slower Am I, which as the sleeve note suggests has the feel of late period Small Faces. These two form an attractive opening gambit for the LP.

We Don’t Exist employs some dance rhythms set off against a keyboard refrain and uses some neat guitar work well, with Lemon Pie Fair following on in a more conventional psych pop format. The title track is very jolly, though unfortunately the second half of the album isn’t as good as the first. The rather aimless version of Moving Moor does not really help matters. A breezy pop number in Hey Girl You’ve Got Style helps regains some momentum and the chunky, funky final offering If You Are My Love speeds us towards the end on a high. The bonuses appended here are alternative versions of Moving Moor and This Way I Feel. The former does work a little better with more dreamlike organ being applied and The Way I Feel retains its freshness and easy going charm.

This second album sadly didn’t attract any real interest and Coe decided to try his luck in London to seek his fortune, with the result that in the 1980s he masterminded Monsoon’s Ever So Lonely hit single. His departure left Complex without a keyboard player and songsmith. Step forward Mike Proctor, who had recorded for EMI as a solo artist and had later been in a few Blackpool bands of the progressive variety. It’s not going too far to suggest that Complex were a changed band with Proctor out front. When Coe was heading up Complex, their firm pop instincts and taste for psychedelia balanced out their slight prog leanings. Now things were different.

Proctor helped give those leanings more prominence during in his short tenure. The final disc brings together the band’s recordings after Coe’s involvement with Complex ended, dating from 1972 to 1978. Proctor’s prog influence is born out on the first five tracks here, all taken from an acetate recorded in 1972 for Radio Blackburn. The cosmic eight minute No Title (We Don’t Know Yet) is probably the most progressive item on show and very good it is too. To Make You See Me is a really engaging, lengthy Complex pop number and a cover of Redbone’s The Witch Queen Of New Orleans is quite funky and danceable, apart from the irritating whistle that sounds like someone has left the kettle on. A fun take of Isaac Hayes’ Theme From Shaft brings to an end the section of disc three documenting Mike Proctor’s time in the band.

Next behind the keys for Complex was Keith Shackleton, recruited in a laundrette a la Annabella Lwin. An audition for management company Honest Injun saw the band recut two items from their second album, but the Shackleton era begins with in earnest with the fast and fuzzy Rock ‘n’ Roll Star. During this time it appears that while Complex had a busy schedule of live work, though it appears that these gigs depended a lot of their ability to cover current hit singles – something that sounds awfully like being on the “chicken in a basket” cabaret circuit. Lance Fogg didn’t seem to care for this much or the pop direction the band were taking and he left during this period.

A group composition Smiley Anne was mooted as a single and Pye Records were interested. With synth squalls, a wordy lyric and a racing rhythm it could have made a mark on 45 with a bit of luck, but Pye passed on it. Eventually the sole Complex single was Who Got The Love/She Turns Me On. With horns to the fore, this pure dance pop number made no headway whatsoever. Pye were a long way from being the mid-60s powerhouse they once were and promotion on the single was virtually nil. To be brutally honest, the song and arrangement doesn’t really do enough to stand out either. The flipside is a brighter sound, but again not very distinctive. Tony Shakespeare’s rocker Down In the City was recorded at the same session and provides the sense of purpose and fun missing in the other two tracks and in my view would have made a better 45.

The final part of this disc gathers unissued recordings from 1976 to 1978. Shackleton’s Who Do You Think I Am is a gem of catchy pop rock and Cruel Woman leaps along with a good energy. Hard rocker The Crack is a good one and they even decided to have a go at being a new wave act with Dial 999. It’s a fun novelty and good on them for trying to move with the times, but does show a band short on ideas. It was no shock that Complex fizzled out at the end of 1978.

Complex’s history breaks down simply into three separate eras. With Steve Coe they really could have been something and put together two very good psych pop albums. Their main problems were that (a) they were based in Blackpool, which like anywhere that wasn’t London in the early 1970s was regarded as a musical outpost and (b) both LPs were released about three years too late. As a result they seemed anachronistic in the prog rock world of the early 1970s. Now that isn’t a concern and we can appreciate their first two albums for what they are. That is good quality and inventive records with a real energy to them. They are perhaps just short of being total psych classics, but are still very enjoyable recordings to listen that include some great tracks.

The third disc is more problematic, but it is a decent grab bag with some good efforts. When Mike Proctor joined he nudged them closer to the sound of the times, but even then Complex kept their ear for a smart melody. Perhaps if they had decamped to London then, they might just have made it? We will never know. After he left the band pursued a more pop approach with Keith Shackleton at the helm. It is easy to conclude that they were clutching at straws by this time and trying to get a freak hit through cashing in on glam and punk era novelties. Even so, Complex still brought a liveliness to their recordings that was impossible for me to dislike and this set Live For The Minute is thoroughly charming, with a few tunes to absolutely fall in love with.