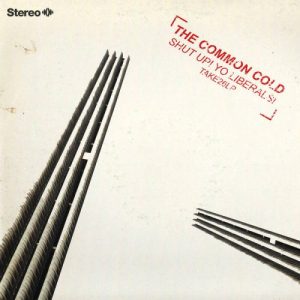 Eh? I thought this “kind of thing” was old hat, kiddoes. The sound and approach on Shut Up! Yo Liberals! (lads, guitars sardonic North Western observations) is a reworking of a hoary old template, the sort of thing the Bright Young Things of pop are meant to move away from with their laptops and algorithms and wotnot. But we should note that this is the sort of sound that has been hard fought for over the years and keeps on giving when done right. As well as obvious names like the Biscuits or Cabbage we can also reference Northern outsider bands like Monster Island or Politburo who work uncomplainingly and often enterprisingly at the edges of British guitar music. We have to realise that, given the current torpor-like, malodorous consensus in what lads or men are supposed to do creatively in the United Kingdom, bands or creatives like The Common Cold and the aforementioned above – and the countless others ploughing this furrow – constitute a much needed bulwark against the teeth rotting sounds of Cowell and co, or the emotional brain-wipes proffered up by by TalkSport Orcs. Bands like The Common Cold are just never given the credit for manning the creative trenches.

Anyway, enough expostulation. The band are two members of the legendary Dandelion Adventure, Ajay Saggar and Mark Wareing, recently reunited after a 30 year gap courtesy of some impromptu jams that turned out peachy. The band also boast a two drum attack, whose presence can be felt most forcibly on Shut Up!...

One shouldn’t think that this is a worthy plod from a reconstituted past, though. What this record has is a shimmer, a gleam. It glides through its allotted time, at times slipping through your fingers with nary a nod or a wink. It’s a summer record as a matter of fact, out on a day trip with sarnies packed and the hope of finding a pub with the football on.

The opener, the groovy mantra ‘Stop The Traffic’ sets the tone, the patter of the drums matching the antsy raga served up by Mark Wareing’s vocal lines. And Ajay Saggar’s trademark guitar swirls and arpeggios enmesh the listener here as they do throughout the record. Again and again. It’s a marker, a promise that the record offers stranger sweetmeats. Acting like a fairground barker, Wareing deals in the groovy Lancashire doggerel that should probably given some kind of protection order alongside Champagne or Melton Mowbray pork pies. Better is to come, just around the corner in fact, with ‘The London Look’ a track that is a street corner anthem, arresting in its braggadocio.

As stated before this is a very difficult LP to grasp because of its chrome-plated shininess and slipperiness. It just rushes past you, tracks like ‘Half Nelson Headlock’, ‘Tapped’ and ‘Bored of the Bayou’ are a flurry of hooks and riffs, disco beats and vocal blurts. You pick up on moments; wondering at times what on earth Wareing is on about, Stalin? Julie Christie? With tracks like ‘Low Winter Sun’, the whole record starts to sound like a woozy, sun-kissed afternoon in a beer garden when one of your mates is on form, shooting the breeze.

If one was to give one criticism (and it’s only a minor one born of wanting much, much more) it’s a shame that there aren’t more slow tracks like the formidable ‘Napoleon’s Index Finger’, a purposeful and stately observation which has something of Can’s ‘On The Beautiful Side of a Romance’. See also the magnificent prowling soundscape that is ‘Pretty Julie’.

Regardless of that niggle this is a truly enjoyable record, and definitely one for the long half-remembered summer days.