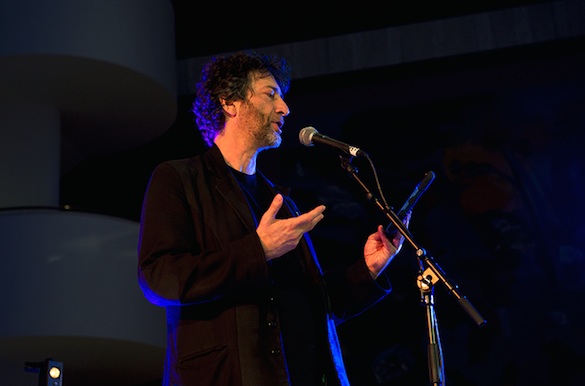 Late at the Library, Friday 16th May

Acclaimed author Neil Gaiman flew in last week to promote a major new exhibition at the British Library, “Comics Unmasked: Art and Anarchy In The UK”. Famous for his best-selling “Sandman” series and for being the brains behind movies including “Stardust” and “Coraline” he was joined by long-time friend and collaborator Dave Mckean, illustrator of many Gaiman works during more than two decades. Also on the bill were ex-Soft Cell singer Marc Almond, musician and artist Alexander Tucker and renowned fashion designer Pam Hogg.

It had been a hectic few days for Gaiman who arrived in the UK after visiting refugee camps in Syria. He was interviewed by the BBC World Service and used his personal Twitter to tell his 2 million followers he was “traumatised” by the experience, urging them to support the UN Refugee Agency which had invited him. 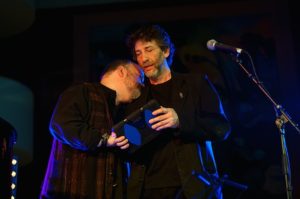 The seemingly inexhaustible writer also took part in a sold out Q & A session at the Library’s conference centre with close friend Tori Amos who was taking a night off from her UK tour (review of her Manchester show). He then crossed to the main building’s foyer to read aloud from his stories and for the first time ever he was accompanied by music from Dave Mckean (see photo right, with Neil), who proved himself to be a talented jazz musician as well as an award-winning graphic artist. The latter also played to a backdrop of short films he had made.

Later, with DJ intermissions from Pam Hogg, Marc Almond took to the stage for some cheeky cabaret numbers. He stepped in at short notice after Gaiman’s wife, ex-Dresden Dolls front-woman Amanda Palmer, had to pull out of the event. The evening drew to a close when Kent-born Alexander Tucker (see photo below) performed an electronic loops-based set. 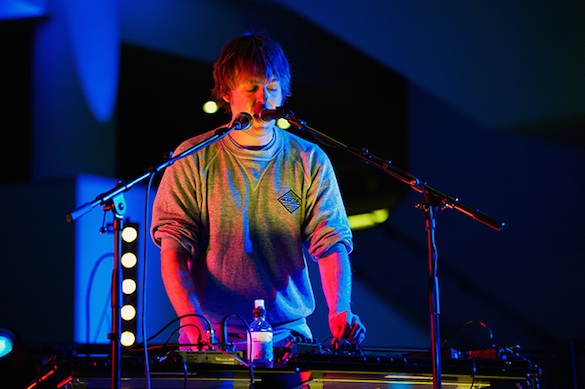 It was a night celebrating British talent covering various mediums and the exhibition features mainstream and underground comics dealing with subjects ranging from politics to gender and sexuality. The catalogue of treasures includes the first weekly comic dated 1825, art from The Beano and darker adult works by legendary “Watchmen” author Alan Moore, Gorillaz artist Jamie Hewlett and, of course, plenty from Gaiman and Mckean.

Comics Unmasked: Art and Anarchy in the UK runs until August 19th.

British Library Website: bl.uk and the specific link on it with info about the exhibition is here.

Alexander Tucker is on Myspace and his Thrilljockey page is here.

All words by Nick Holmes  and all photos © Tess Donohoe. More writing by Nick on Louder Than War can be found at his author’s archive. Nick also tweets as @oldenick666. More photos by Tess can be found at her website: tessdonohoe.com.