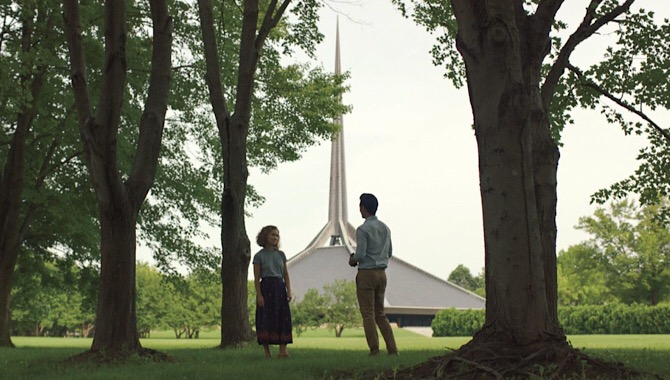 Showing at Home, Manchester and on general release

Lee Ashworth reviews new film Columbus, which explores relationships against a backdrop of the impressive modernist architecture of the American town.

Jin (John Cho) and Casey (Hayley Lu Richardson) meet in the quiet town of Columbus, Indiana.  Whereas Jin is trapped, awaiting news of his comatose father, Casey rebuffs all advice to leave and start her own life in order to look after her addict mother.  Despite compelling performances from Richardson and Cho and superb supporting roles from Posey Parker and Rory Culkin, the main character in this unusual and understated film is the modernist architecture of Columbus itself.

At Manchester’s Home, a screening of the film is preceded with an introduction by Eddie Rhead, commander-in-chief of Manchester Modernist Society – a testament to the quality of the architecture featured and by implication, artistically, the stylistic merits of film itself.

During the film we visit Eero Saarinen’s North Christian Church and the former Irwin Union Bank, and we wander through Goldsmith’s Republic Newspaper Building – sometimes accompanying the characters, sometimes alone, peering through the windows voyeuristically, looking in.

The story is sparsely constructed yet economically elegant, in true Modernist style.  All is purposeful yet articulated with an understated passion, each scene in service to a systematic and consistent aesthetic, the sum of which is greater than the parts.

The lines of these Columbian characters are expertly drawn and we follow them as they intersect, enmeshing, creating and continuing the Modernist grid of the film.  Apart from the obvious showcasing of the architecture – for example, the neo-futurism of the North Christian Church forming the focal point of the scene while the protagonists are silhouetted in the unfocused foreground – the wider spirit of Modernism abounds.

Piet Mondrian haunts every frame of this film.  For many scenes, between and prefacing dialogue and action, the camera is still, depicting interiors from the domestic to civic spaces, houses to libraries, offices, corridors, hospitals and museums.  The scenes are presented as tableaux.  A static shot through several interconnecting rooms in a compact house remains on screen long enough for its details to somehow fade away and the more abstract structure of interlocking rectangular panes becomes apparent: the door frames, the open cupboard doors, the windows, the drawers, the perspectival rendering of the floor itself.  Later, a room with a display table upon which a series of objects such as snow globes are arranged precisely, co-ordinated by colour, is supplanted by a row of library shelves, the spines of the books textured rectangular panes divided by the vertical and horizontal tectonics of the shelves that support them.  Again and again, we are presented with the hallmark primary colours – the dockets on the wall of the intensive care ward, the post-it notes on the partition of the office where Casey submits her application.

Why do works such as Broadway Boogie Woogie and New York City, both by Mondrian, endure?  Because they spoke and still speak so redolently of the context of Modernism, the cities that were formed by and also formed the new ways of living of the twentieth century. The lines, the primary colours and above all, the grid, with its inescapability, its forceful coercive directions, its urgency and its unmistakably straight line hallmark of humanity – all these things tell us that ‘abstract’ art is the world in extreme close-up, not far removed as is often misconstrued.  Mondrian saw the substrata of our existence, a substrata so mundane and ubiquitous that we fail to see it.

Kogonada sees it.  Kogonada takes Mondrian’s lines and runs with them, leading them across the screen from the static representations of De Stijl to the rapidity of digital film.  And then he freezes them again, stops time, makes us look.  We see the characters, in close-up, talking and smoking on the library steps.  Then we see Casey looking through a window, then we catch a glimpse of her in reflection through the window, her appearance interwoven with the straight edges of the blinds and cut vertically by a door frame behind her.  We see Casey and Jin as dim characters somehow overlaid upon the immovable background of the Saarinen’s spiky church.  Casey may be besotted with the Modernist architecture of Columbus but Kogonada knows that she’s part of it, it skewers her.  Modernity with all its impersonal trajectories, all its maddening and unstoppable forces, is riven right through her.  And you.  And me.  We are all caught in the grid.

There are echoes of Kubrick from the opening scenes in their precise arrangement and perfection: the way they could be blown-up, mounted and hung as artworks in their own right.  There is a stage-like naturalism in the dialogue and an interplay between the characters reminiscent of early Hal Hartley.  But in Columbus, Kogonada has created a miniature Modernist masterpiece.

You can find the trailer for Columbus here:

You can find The Modernist Society here.