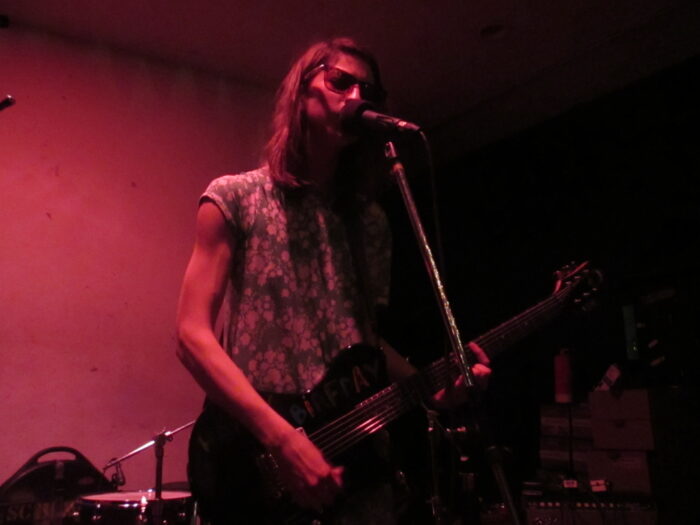 Understated slacker pop queen Colleen Green played some choice cuts from her well-received latest album I Want To Grow Up at a sold out Shea Stadium show, followed by Upset, the new vehicle of former Vivian Girls drummer Ali Koehler.

The other Shea Stadium is a DIY show space and recording studio nestled in the industrial alleys of East Williamsburg. The 150 capacity room was crowded and steamy as I waded towards the front for openers Charly Bliss. Charly Bliss call themselves “bubblegrunge”, and it’s a reasonably apt description for their style of fat, crunching guitars and treacly harmonies. During the course of the set, however, the band’s compositions came off as fairly weightless and predictable. I can imagine them succeeding on the radio, but I was craving something with a little more individual sparkle and flair. They had nice and colorful, hand-made looking merch for sale that caught my eye, though.

Colleen Green’s new album enlisted some guest players to flesh out the sound (Jake Orrall of JEFF The Brotherhood and Diarrhea Planet’s Casey Weissbuch), but she still performs solo, armed with just her guitar and a drum machine. Because of this, she can be an easy target for slow-witted and less patient audiences, but those who get it are always in for a singular treat. Although most people came tonight because they were curious about headliners Upset, I was pleased to notice a fan wearing a custom t-shirt by my right, CG in Simpsonized form as seen in the TV official video. Colleen arrived onstage in a floor length green floral print dress and black Reeboks, and when she put on her signature shades, we all knew she was ready to start. She said she was excited to play but warned us in case she seemed a little fatigued, “I’ve traveled from Philly to the Bronx, carrying my guitar on my back and my drum machine in my arms like a baby. It sucked.” 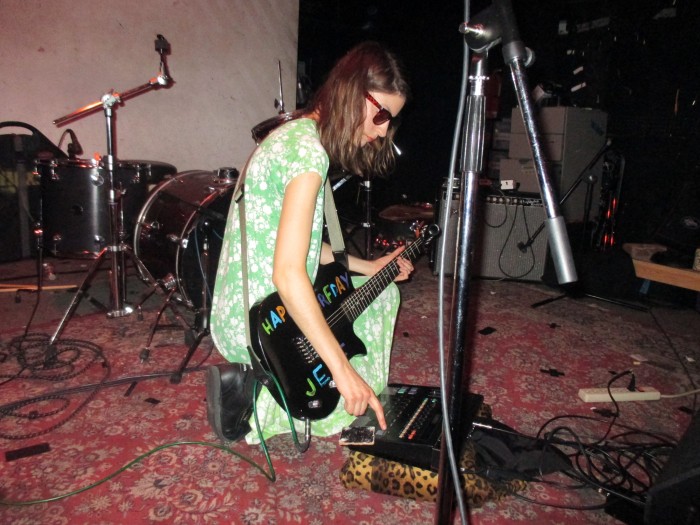 She blazed through a number of new songs as Ali Koehler sang along at the back of the stage. I Want To Grow Up, TV, and Grind My Teeth are all very welcome additions to the Colleen Green cannon, full of her usual acerbic charm and sharp melodies. CG has a beautifully delicate, feathery soft voice that often makes the painful emotional honesty of her more troubled tunes seem oddly soothing and reassuring. Her voice, combined with some simple three finger power chord alterations and a steady metronomic beat, is already capable of many great things. So while the addition of a full backing band might boost live energy levels, Colleen Green is not your average rock ‘n’ roll showoff, and this low-key set up just makes sense for her. She doesn’t need to prove she’s a superstar; she already is one because she does what she wants, the way she wants to do it.

“Does everything sound alright?” she asked between songs. “It’s acceptable.” replied some smart ass in regulation 90s flannel and a Foo Fighters t-shirt. CG studied him for a moment before coming back with “Do I know you? Didn’t think so…J/K” and then carried on playing more songs. During the tune ups and beat programming breaks she seemed slightly agitated by the scrutiny of the crowd, but remarkably remained the coolest person in the world with very little obvious effort. “More handclaps!” another smart ass chimed in later, and Colleen obliged on her drum machine with an excessive volley of beats, asking with a wry smile, “How many?” Then with impeccable timing, she plunged into Whatever I Want (“I got a mind of my own and I know it’s a good one so I don’t take advice from fools/Don’t wanna be scared/I’ve gotta see what’s out there/lately I’ve become aware/that I can do whatever I want/Whatever I want) and I felt very satisfied and proud and in love with Colleen Green. It was the message at the core of her new album in action; growing up doesn’t have to be completely boring and terrifying; it can also be freeing and empowering.

Upset was next, and the current lineup is Ali Koehler on vocals and guitar, Patty Schemel on drums, Rachel Gagliardi of Slutever on bass, and Lauren Freeman on additional guitar. They’ve just released ’76, a follow-up EP to their debut album She’s Gone, and immediately began with its lead track, Glass Ceiling. Ali Koehler twisted and swept her sweat-soaked bangs off to one side of her face, announcing “It’s not sweater weather” before stripping off a layer. She paused to reflect on her LA move, saying she misses the assholes of the east coast, and how she’s too mean for the west coast and that’s probably why she has no friends there. 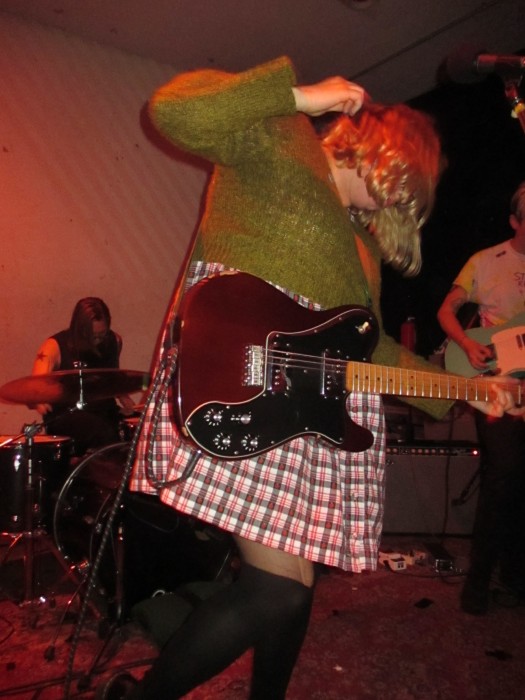 It’s funny to see the gifted artists of my generation championing and upcycling the puerile pop-punk of the 90s that I so reviled as a bad tempered, unpopular high schooler (Upset covered Green Day’s Jar, and Colleen Green is a well-known Blink-182 devotee), but I’m glad I finally have something to thank those bands for. Upset played the entire ’76 EP, which also features a cover of Jawbreaker’s Do You Still Hate Me?, along with Oxfords and Wingtips and the commercially candied Don’t Lose Your Dinosaur from She’s Gone. Their set was a hyper sugar high of sweet harmonies and fast, grimy riffs that got the crowd moshing.

The sprightly Upset may have been the draw for most of Shea’s attendees on this Friday night, but it’s Colleen Green who really continues to wow me with her laid-back, self-reliant cool and good ear for songs. Catch both bands on tour if you can!