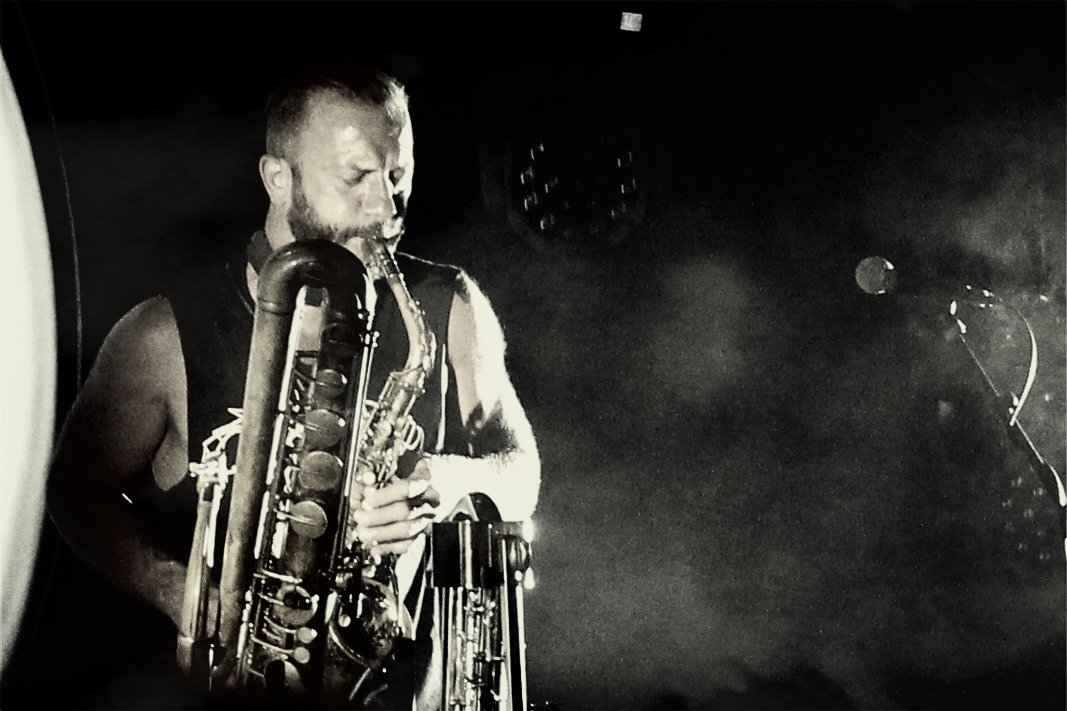 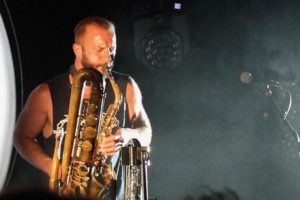 So we arrive at this, the penultimate of the Dark Matter shows expertly curated by the wonderful Mary Anne Hobbs for the Manchester International Festival. Paul Scott aka Lippy Kid guest reviews for LTW.

Gorilla is packed tonight. And given Mary Anne’s own prior admission of Colin Stetson being “my favourite artist in the world right now”, anticipation and expectation for this particular show was always going to be high, and one not to be missed.

This will be the first ever solo appearance in Manchester for the Michigan born, now Montréal based artist, and he arrives having recently released one of the albums of the year, the much lauded, “All This I Do For Glory”.

Many are aware of Stetson’s prolific role as collaborator having worked with people as wide ranging as Arcade Fire, Bon Iver, Tom Waits, Dave Gilmour plus many more, but to experience his live solo show is to recognize that here, in this setting he is a very different artist.

To see Stetson on stage, in the flesh, is to recognize a man prepared for an immense physical challenge lying before him. He has the appearance of an Olympian and he’s greeted like a Gladiator ready to tame the ferocious looking instruments laid on stage before him.

He drinks a full bottle of water in a couple of gulps, he dons his alto Saxophone, the audience falls silent, and he begins…

It’s almost impossible not to read one of his reviews without some mention of his incredible technical ability. His virtuosity. The circular breathing technique, allowing him to play continuously without a pause for breath. And he showcases this to perfection as he opens with the spiraling, ebb and flow of ‘Spindrift’. His mastery of multiphonics is jaw-dropping and the Gorilla audience are immediately captivated.

He switches to his mighty Bass Sax and follows up with some new material, the first of three new tracks tonight. Where ‘Spindrift’ induced a state of tranquility, this is its raging sibling.

It’s at this point you note, the man is mic’d everywhere! Several sit upon his throat to capture his haunting reed vocalisations. There are more plastered to his Saxophone to capture every intricacy of his percussive valve-work and its mighty roar. It’s hard to believe what you’re hearing and experiencing is possible without overdubs and loops. The performance seems almost Superhuman.

He intertwines with his huge Sax as an array of drones modulate around us. Every timber is being explored. And constantly we’re brought back to that haunting vocal sound. It’s no overstatement to observe he truly does transform into a one-man orchestra.

But moments into his show, you notice something.

You stop thinking about the technical ability. The physicality of the performance gives way to something so much more moving and emotional as the sheer immersive beauty of his music begins to envelope you.

On a track like ‘Between Water and Wind’, as the galloping shifting melody induces an almost trance like state, we find ourselves completely under his spell.

Throughout the set the music shifts. One moment multi layered, reminiscent of the modern American Masters like Steve Reich and Philip Glass. The next it adopts a repetitive, dark industrial feel that Autechre would be proud of. And in-between we have passages of beautiful subdued ambience. It’s a truly thrilling ride.

As the deep groove of ‘All This I Do For Glory’ brings forth its thrilling, swaggering, hypnotic rhythms, the visceral quality of what we’re experiencing comes to the fore.

There’s a sense of a spiritual relationship that he appears to have with his instruments and it’s this that starts to dominate prevailing feelings. You become more acutely aware of your extended environment. Those around you. Those you love. Those you’ve lost. It’s hugely emotional. Every inhale, every exhale, the click-clacking key rhythms, all bonded as part of his incredible soundscape. Everything matters.

You start to notice and absorb Stuart Bailes’ highly imaginative lighting design. A key feature of these Dark Matter shows, and tonight acting as a perfect backdrop to Stetson’s life affirming music.

As we enter “Strike Your Forge and Grin”, another new track, and the final one tonight, we start refocusing on the Technical Mastery once more.

Before starting he states ‘this will take me out of the game…’.

It’s a justified statement. It’s epic. A Fifteen minute masterclass in artistic endeavor. Stetson’s incredible breathing technique producing an unbroken sustained set of notes whose resonance steadily increase before, midway, it breaks into an uplifting beat driven stomp. There’s a collective disbelief at how he can be doing this live but one a look at him at this point, his eyes rolled backwards into his head, and you’re clear on the mental and physical endurance needed to deliver what we’re experiencing.

As the decay of the final note reaches its end Stetson looks totally exhausted. Here stands a man who’s left every bit of his soul, every fibre of his being, on the stage. And the crowd love him for it…..they’re ecstatic. We’ve been in the presence of a truly unique and imaginative artist. As the audience filter into a balmy Manchester night, the superlatives are bountiful. “Genius”, “Unreal”, “Spellbinding”, “Otherworldly”.

At a show where we’re invited to ‘Destroy Our Boundaries’, Colin Stetson has rewired our collective senses to ensure we’ve done just that…..spectacularly. Truly outstanding

All words and photos by Paul Scott aka Lippy Kid. Lippy Kid can be found on Twitter where he tweets as @LippyKidMusic