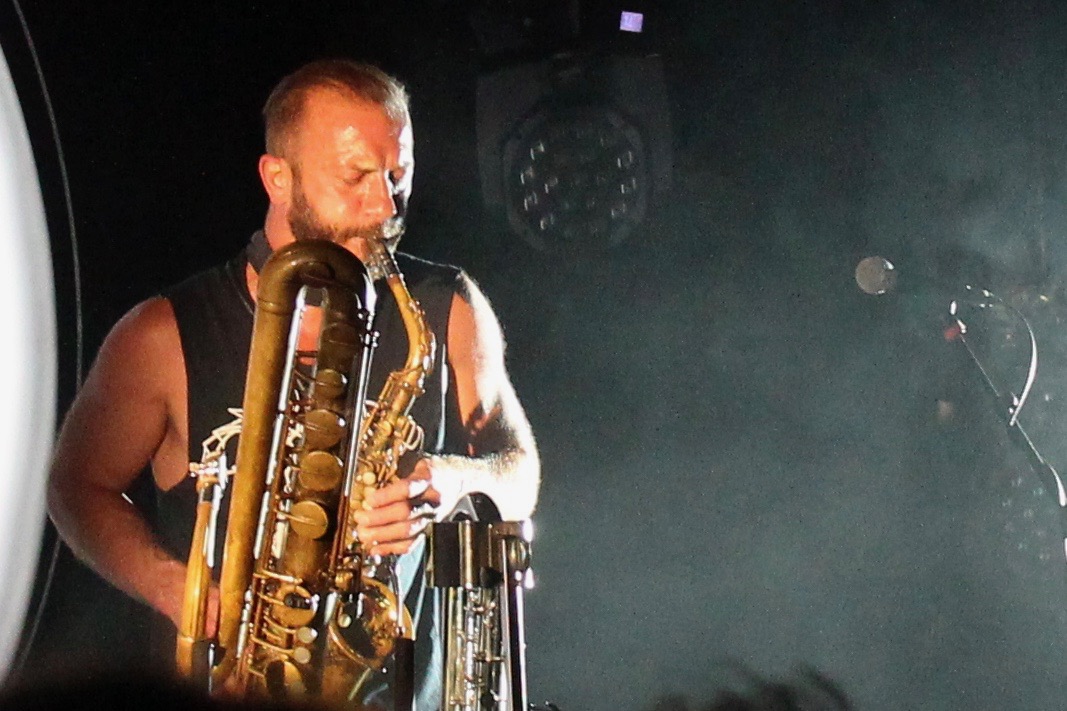 In their native wilds, African elephants can communicate with others across a distance of around six miles using subsonic rumbles detected through the soles of their feet. The great whales transmit clicks, whistles and songs which travel through the oceans over distances of up to 100 miles.

Perhaps tonight they will be receiving the otherworldly musics of Colin Stetson from other continents, other hemispheres – certainly the Canadian saxaphonist appears to share little in the way with conventional human performance. Thankfully, for most of us a simple journey into Manchester city centre will prove enough to put us in contact.

Kudos too to support duo A-Sun Amissa, who trade haunting clarinet and sparse guitar strokes against a background of ambient electronic rumbles, and calibrate the mental antennae to a suitably scrambled frequency.

Stetson takes the stage cheerfully, trim and toned-looking in a plain white t-shirt, exuding yogic good health against simple, minimal stage lighting. He doesn’t require much in the way of a stage set, merely selecting the smallest of his three saxophones, taking in a couple of deep, rhythmic breaths and without further ceremony sending out an improbable cascade of rippling notes. He sways gently back and forth, his fingers gently sending a pulsing massage over the keys of his instrument, a throat microphone strapped around his neck adding in imperceptible ways to the astonishing ocean of sound in which the audience suddenly finds itself immersed. The venue is called, with blunt simplicity, the Pink Room – the walls and ceiling are pink, as are the PA speakers and the folds of the curtain at the back of the stage. I’m aware of a certain womb-like aspect to these surroundings as Stetson’s circular breathing technique sends wave after wave of arpeggios spiraling out above, around and into our heads. My thoughts idly drift to the biblical tale of Jonah, suspended in the belly of a whale – if that whale were to somehow be humming Phillip Glass to itself during the warm incarceration, then that would sum up the experience quite accurately. As he will do with each subsequent piece, Stetson brings the music to a close by almost seeming to wrench himself from a dream, taking a deep gulp of room air and giving a little shake of the head. Plainly this is a hugely physical act of performance. Perhaps there’s some sort of Shaolin-style temple where lungs and fingers are trained to inconceivable degrees of intensity. Perhaps it’s best not to know. Let’s not overthink this conjuration.

Next, he picks up the formidable bass saxophone, an imposing assemblage of tubes and valves almost as tall as the performer himself. It looks like it has been unscrewed from the engine room of Captain Nemo’s submarine and sure enough, as Stetson sets abruptly into ‘In the Clinches’ from his latest album, it sounds like little you’ve heard before, a genuinely astonishing fusillade of pulses, clicks, drones and howls at juddering volume that fill the listener with a primal awe. Even though we can see what he’s doing, it’s difficult to process how he is actually making this thing happen. It’s quite a thrilling sense of bewilderment.

Colin Stetson – In The Clinches

Stetson moves to his third instrument, which barely looks like a saxophone at all, more like one constructed from memory from a gleaming collection of parts. The resultant performance, once again, has few reference points to anything most of us have any familiarity with. I picture one of Guillermo Del Toro’s more outrageous monstrosities from Hellboy, summoned up from its Lovecraftian depths to release some intestinal growl of despair / lust / confusion…who knows at this point. How is Stetson doing this? What, in fact, is Stetson doing? I realize this is the sort of question I find myself asking too infrequently. It feels good to have one’s sense of wonderment sent out for a reviving stroll.

The set, according to conventional timekeeping, lasts only an hour, but passes as though in a trance. Perhaps it’s been days. He concludes with a hypnotic thing, a slowed down roar which sounds like the reverberating pulse of an entire solar system. Sunn 0))) construct similar edifices from multiple guitars and banks of amps you could house families in. Stetson manages it with a weird collection of metal tubes and unimaginably overdeveloped lungs. He takes us to another place altogether, and with bewilderment and gratitude, I salute him.