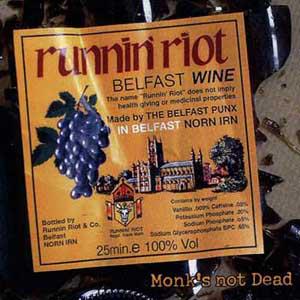 At 6.30pm on 18/08/14 I took a phone call from a mate who informed me that Colin, lead singer with Belfast band Runnin Riot had died. Once the news sank in, and believe me it took a while, I felt like someone had torn a peice of my heart out.  Colin wasn’t just a singer, indeed he was more than just a mate, he was one of the most loyal, true, generous human beings I have ever had the honour to meet.

I first met Colin in 1999 in Llandudno of all places, a mate of mine put gigs on there on a Sunday and Runnin Riot were playing. I’d heard of the band and had been told about the singer, a mild mannered man offstage but someone who sounded like Ian Paisley fronting a punk band on it.  A more accurate description I’ve yet to hear.  I began seeing Colin at regular intervals at gigs round the country, he always had time for a chat and a laugh, especially a laugh, don’t think I ever saw him without a smile on his face and a bottle of buckfast in his hand.

After knowing him a couple of years the inevitable happened and he invited my band MDM to Belfast for a gig. It was here that I was to get my first glimpse of this man’s generosity. He welcomed us into his home, sorted us out well for the gig, fed us and even insisted on coming home from work the next day to take us to the ferry port, an offer we turned down, so he insisted on paying for a taxi.  There have been many visits to Belfast since, always staying at Colin’s house, the last time was February,  when I emailed to ask if he had room for a stray scouser for the Infa Riot gig, his reply was ‘you’re always welcome mate, no need to ask’.

In later years Colin was very settled, he lived with his partner Nikki, they made a truly wonderful couple and it was always a joy to spend time in their company. His band had earned the repspect of the giants of the scene such as Rancid and Dropkick Murpheys and had just signed a deal with Contra Records. Things were on the up, indeed they were in the middle of a tour with Old Firm Casuals when the awful news came through.

I last saw Colin on the Monday after Rebellion, he was the last person I spoke to before I left Blackpool, and my last words to him were ‘I will see you in Manchester’ as we now know that never happened.

Colin mate, there are many more things I would like to say, but I’m not sure they would do you justice. Suffice to say I’m heartbroken at your leaving us so soon, but so proud that I could call you my friend, privileged to have been invited into your home, and your life.  So wherever you are now my friend I just hope they have Sparrer on the jukebox and buckfast at the bar.  Colin I love you and will miss you with all my heart. RIP mate.