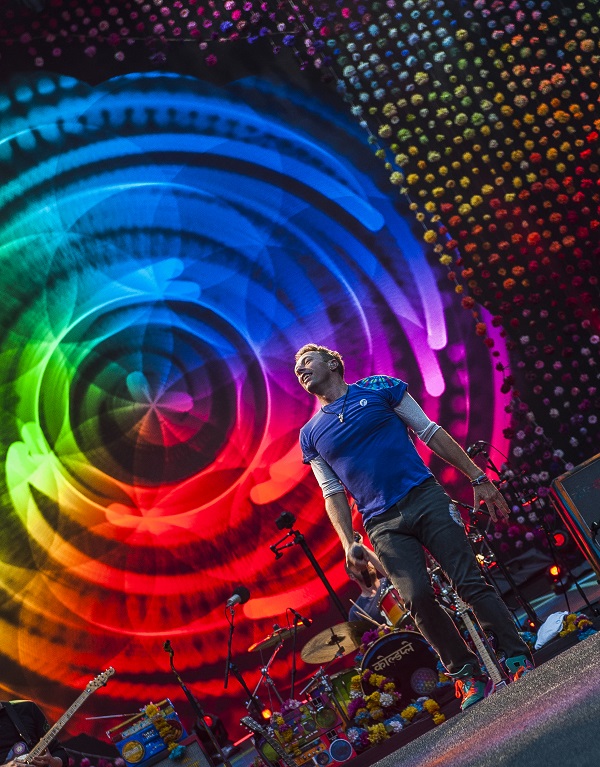 Some would rather stick needles in their eyeballs rather than kowtow to  Coldplay who seem to be the nemesis, the anathema to what some fans see as rock and roll. Yet selling out two nights in Manchester and four at Wembley Stadium they must be doing something right for a lot of people.  How many times come dispatches from the front from many who rate the Coldplay live experience  as being up with the best shows they’ve ever seen? A whiff of what they do in a three song view from the pit gives some indication why.

Just over a week ago, Springsteen had warmed a rain bedraggled crowd and with  AC/DC and the Stone Roses to come there’s a fair bit of competition between the big boys at the Etihad this year.  Alongside the rock giants and the fashionably aloof local heroes, Coldplay might be the safe choice and an easy target for ridicule and mockery but they know the meaning of visual spectacle and how to pull it off in a stadium. 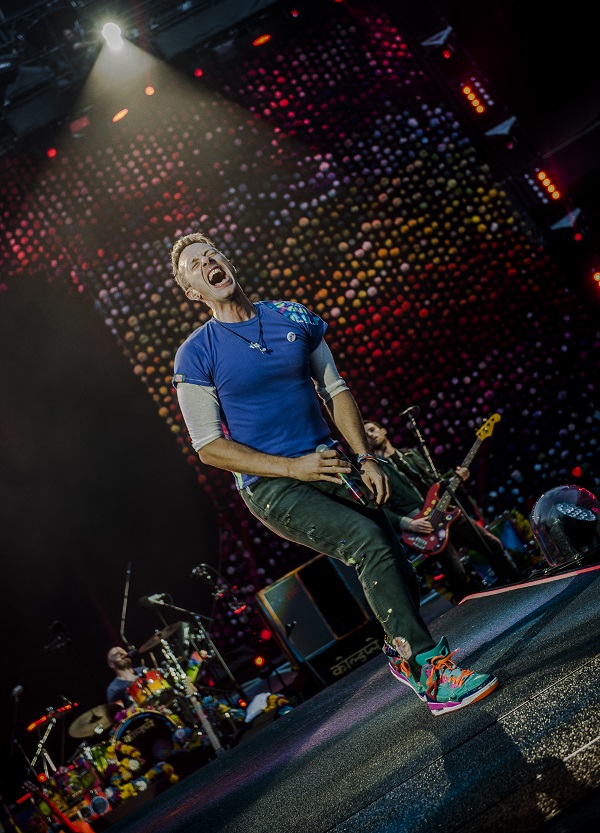 Not only do they have the usual main stage but a lengthy walkway into the crowd and the ‘B’ stage but also now a ‘C’ stage where they can pop up in different places to break down the barriers.  The flashing wristbands may be expected nowadays but ensures a visual spectacle  and does not their live show continue to be the Chris Martin show? He dominates proceedings, performing Joe Hart styles dashes from his penalty area down the ramp   as two sets of confetti cannons explode in the first ten minutes in a carnival of colour lapped up by those who’ve arrived early for the 5pm doors and waited in turn another four hours to be showered with dove shaped tissue.  Martin in his Marty McFly, Back To The Future II trainers, the band and indeed the stage set are similarly colourfully clad. Hindi logos, heaps  of flower decorations and all sorts of ephemera cover the rather small and confined little area in which the band gather. They could all conceivably fit on a postage stamp like many of the great rock quartets – The Beatles,  Led Zep and U2 – yet they’re still able to reach out with their carefully constructed anthems which encourage  and demand a communal input.

Sometimes you just have to hold your hand up and admit that you can see what the fuss is about.

You can find Coldplay on the internet here:  https://coldplay.com/

All words and live photography  by Mike Ainscoe. You can find more of Mike’s writing on Louder Than War at his author’s archive and his website is www.michaelainscoephotography.co.uk