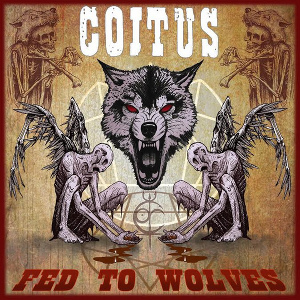 Louder Than War’s Nathan Brown peers at the darker side of life to a sound track of heavy heavy metallic punk.

The first time I heard Coitus was the track “Panic Screams” on a compilation tape in the early 90s. The guitar was set to maximum chug, the bass so growly and the drums so loud that it sounded more like a tank than a band and with the guttural roar of the vocals conjured up all kinds of darkness. A couple of years later and I got to see them play some pretty intense gigs and was suitably equipped with vinyl 7 inches. They were a band that you didnt forget! 19 years after their last studio outing and with a couple of posthumous discography CDs in between they have returned – much like a Victorian villain down a dark alley who you thought had perished in the murk of the Thames. They are back! It is unmistakably the same band but with a bit of a new dimension.

Coitus are punk as fuck but musically I guess they come from that tradition of hardcore with a metal edge that so many New York bands managed to nail. But they have their own take on it. They are from the melting pot of London and don’t you fucking forget it. Some would use the “crust” tag but I don’t find that helpful as it covers a multitude of sins. Most definitely there is a metal influence and there is a heaviness, a darkness, but it is clearly punk rock. Whilst there might be the odd satanic growl, vocals tend to sound like a rowdy street brawl.

Coitus view the world through the opposite of rose-tinted glasses, shit-tinted. They see the darker side of humanity – but they are no misanthropes: they are pointing at the enemies, naming ’em and, if not shaming ’em, spray painting a big fucking target on them.

This LP – which they have plans to bring out on vinyl in the future – has plenty of variety to keep you interested. For example, “Cockroaches” and “Destroy The Concept of Celebrity” could have been off the “Submission/Domination” tape over 20 years ago. “Fed to Wolves” pays homage to Sabbath – with a bit of Venom thrown in perhaps – and “Reaper Man” also has something of an 80s metal feel to it – but they still manage to land firmly on the punk side of the fence. Dont ask me how!

“Fed to Wolves” is a great example to focus on. It features samples from WikiLeaks and tackles the human cost of constant warfare to boost the coffers of arms traders.  This is well informed political punk.  Meanwhile the riffing and guitar licks are on a par with some of the better tracks English Dogs released when they first successfully fused metal with punk (before they went too far!).  And there is that nod to Tony Iommi too….

I love the fact that the spectre of far right activity is referred to as the “Rise of the Shithead”. Let’s be clear whatthese fuckwits are: they ain’t people with political intelligence. They are shit heads! What you might call gallows humour – scary shit but let’s laugh at it. That track is one of many singalong earworms, among them “Dead Comes Alive” whose robotic backing vocal conjures up a bleak dystopian sci-fi world. I also spent a whole day walking round unable to shift the chorus of “Alpha Male” from my mind.

The original artwork in the booklet is of an amazing quality which is no surprise given that guitarist Mik is these days a tattoo artist and was publishing comics 10-15 years ago.

Coitus are on Facebook and you can get the CD from Underground Movement via Discogs or the Download from their bandcamp site.