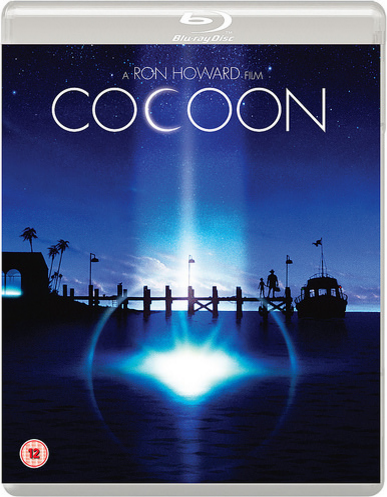 Jamie Havlin takes a look at one of Hollwood’s highest grossing movies of 1985, the double Oscar winner, Cocoon.

Despite its successes, science-fiction comedy, Cocoon, is a film that I had never seen before now. It’s directed by Ron Howard and this fact is likely the biggest factor in that decision. I’m not much of a fan of his populist, often syrupy, body of work. Admittedly he has had his moments but not nearly as many as he should have given the high number of big budget films he’s made over the course of his career.

Cocoon tells the story of a group of senior citizens living in a retirement home in St. Petersburg, Florida, primarily three very likeable pals: Art Selwyn (Don Ameche), Ben Luckett (Wilford Brimley) and Joe Finley (Hume Cronyn), who like to trespass into a nearby vacated mansion, where they enjoy an illicit daily swim and paddle in the indoor pool.

One day they discover that some boulder-like cocoons have been deposited into the water. These have been left by a quartet of aliens known as Antareans, led by Walter (Brian Dennehy), who have rented the mansion and hired the boat of hapless captain, Jack Bonner (Steve Guttenberg) in order to dredge the cocoons from the seabed. Walter is another very engaging presence here, although the subplot involving Bonner and Kitty, an Antarean played by Tahnee Welsh (the daughter of Raquel), is much less successful and likely even superfluous.

Bonner is never as amusing as Guttenberg – and Howard – would like him to be and at times he even verges on the irritating. Potential love interest, Tahnee Welsh, the daughter of Raquel, obviously inherited her mother’s good looks but I think it’s safe to say that her modelling career was always going to be more successful than her stab at acting.

When this pair are together onscreen you immediately want the action to switch back to the oldies, especially once they’ve discovered that their daily dips are having some unlikely side effects and acting as something akin to a fountain of youth. Ben’s eyesight improves dramatically and, even better, Joe’s cancer goes into remission. 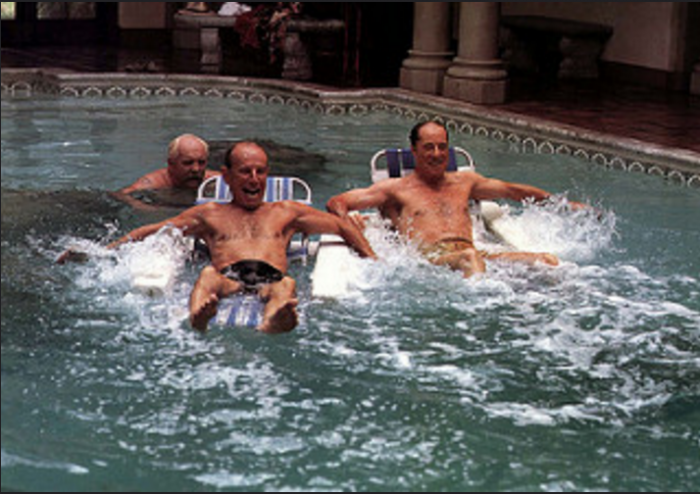 Predictably libidos perk up too and, before too long, these far from grumpy old men are diving off springboards, getting involved in some fisticuffs with some of the staff at their retirement home and even hitting a local nightclub, where, since this is the 1980s, smoothie Art decides to impress the regulars with his newfound breakdancing abilities – this is convincingly shot with a teenager wearing a Don Ameche mask standing in for the old man for much of the scene apparently, although that is the veteran actor spinning round on the dancefloor.

The rejuvenation process, though, can be a double-edged sword. With a renewed spring in his step, Joe’s roving eye for the ladies returns and he cheats on wife Alma (Jessica Tandy) which leads to their separation.

While the three friends and later their partners make the most of the opportunity offered and have no qualms about the ethics of their revitalised health, another pal that they invite to join them raises objections, vowing that he and his wife will play the hands that nature dealt them – although in a very moving scene later on he might come to regret that decision.

I won’t give too much away about the Spielbergian ending but it does throw up another intriguing dilemma involving mortality and includes a beautifully observed scene between Ben and his grandson.

So, although far from flawless – and listen out for the single voice-over that has to be one of the clunkiest in cinema history – Cocoon is definitely worth seeking out, especially for the uniformly excellent performances from the older cast members.

Don Ameche won a gong at the Oscars as Best Supporting Actor but I enjoyed Wilford Brimley’s performance more and Jessica Tandy is also in outstanding form here (better than in her own Oscar winning turn in Driving Miss Daisy).

The other Academy Award went to Special Effects, which I guess, in the pre-CGI age likely struck audiences as much more impressive than they would today. Three decades on, some still work well enough while others look like the equivalent of a once very attractive face now wrinkled and with a jowly jawline.

The cinematography, though, is gorgeous throughout, particularly the underwater scenes shot in the Bahamas where there’s some great footage of dolphins – real and not so real ones.

I’m even tempted to get my hands on a copy of the 1988 sequel Cocoon: The Return which reassembled the bulk of the cast (but was directed by Daniel Petrie).

Extras include five short featurettes, a feature-length audio commentary with Ron Howard and a collectors booklet.