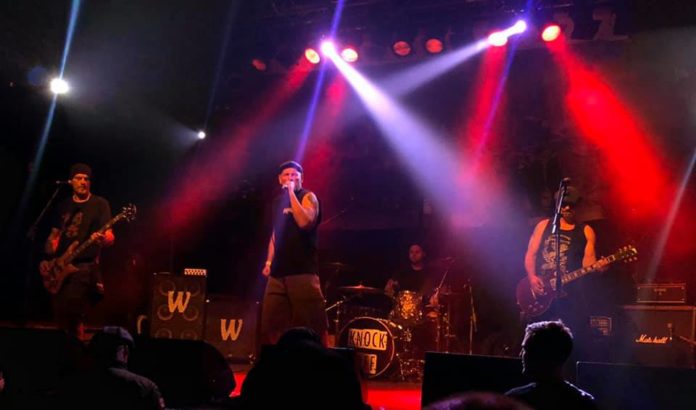 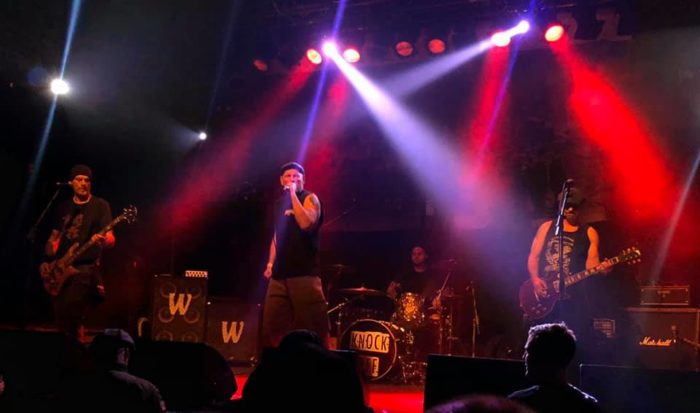 Forty years on from their teenage beginnings as ‘New Punk’ saviours, touted by Bushell in Sounds and the Rejects are a punk institution whether music-snobs like it or not.  Even grammar-school boy in 1979 Ged Babey thinks they are the dogs bollocks still in 2019.

This was a great gig.  A shit-hot performance by a great rock’n’roll band. Loved every second.(yeah, even though I went for a fag, six songs in).

It wasn’t a full house but the ticket price kept yer average half-interested knobhead away,  Even I paid to get in, as I’d never seen the Rejects before and the venue co-owner who I know was absent, gigging elsewhere.  The Brook survives on tribute acts so if an extra few quid for a proper band makes any difference I’m happy to pay… and the Rejects were worth every penny.

Jeff ‘Stinky’ Turner is a fucking hero.  Full of energy and banter, he is like a prize-fighter onstage.  He jogs and shadow-boxes when he’s not singing or talking and is a rabble-rousing frontman for a rock-solid band.  Capped and beatnik-bearded Micky Geggus is a guitar hero in Steve Jones/Thunders/Fast Eddie mould. No excess, just great playing and a monster over-driven guitar sound.  Vince on bass is a foot on the monitor rock-star and the drummer, John Paul Sansome is a  master of his art -the art of beating the shit out of the drumkit.

A bundle of energy, Turner in his flat-cap does make me think of Norman Wisdom being possessed by the spirit of Muhammed Ali as he bobs and weaves with a grinning grimace on his face. I don’t mean that in a throwaway or negative way.  Wisdom was a popular old-school British institution and Ali was one of the greatest sportsman ever, so if anything it’s a compliment. I probably wouldn’t have the balls to say it to Jeffs face though…

It was pretty much a greatest hits set, (the bulk of the set from Volume 1 and 2) but every song I wanted to hear…

(Ian Canty -aka Marvo the Memory-Man tells me..) ‘They started with War On The Terraces and the encore was Police Car and Oi Oi Oi. They also played Hate Of The City, Sitting In A Cell With You, Cockney Rip Off, Badman, I’m Not A Fool, East End, Power And The Glory, On The Streets Again, We Are The Firm, Join The Rejects/Wanna be A Star, Flares And Slippers, The Rocker, Someone Like You, We Can Do Anything and Subculture which was introduced with “Morrissey said Subculture was his favourite Rejects song as he recited the words to stop him getting a hiding from a bunch of skinheads….I wish the cunt had forgotten them!”

I remember in 1979, taping Peel sessions off the radio and I had a C90 cassette which included the first Joy Division and the first Rejects sessions. Most of my peers rated the JD one but to be honest, I much preferred the Rejects one, despite having no interest in football or scrapping. It was a lifestyle as alien to a Wiltshire grammar-school boy as the smack and blow-jobs of the downtown New York scene inhabited by Johnny Thunders.  But the sound and the energy was a buzz,  and had a gritty realism about it and the same heroic struggle to transcend the everyday.

I didn’t remain a die-hard fan, the decision to take a Metal route was understandable but not what I wanted to listen to. (The Rocker is still dedicated to Lemmy…)  I’ve always retained an admiration for the Rejects though – as a thoroughly real, unpretentious band who dealt with a lot of slings and arrows of outrageous misfortune.

Finally seeing them in 2019 as an older and wiser, relaxed, fit and healthy, no nonsense rock’n’roll band was great.  They’ve lost none of there rough diamond charm and outclass and outplay most of their peers.

The latest Vive Le Rock Magazine -available in most newsagents – has a massive interview with Cockney Rejects conducted by the mags best writer Joe Whyte.

The band play a special gig on Sat 14 Dec at the London Islington O2 where for One Time Only they play their first two albums back to back in full.