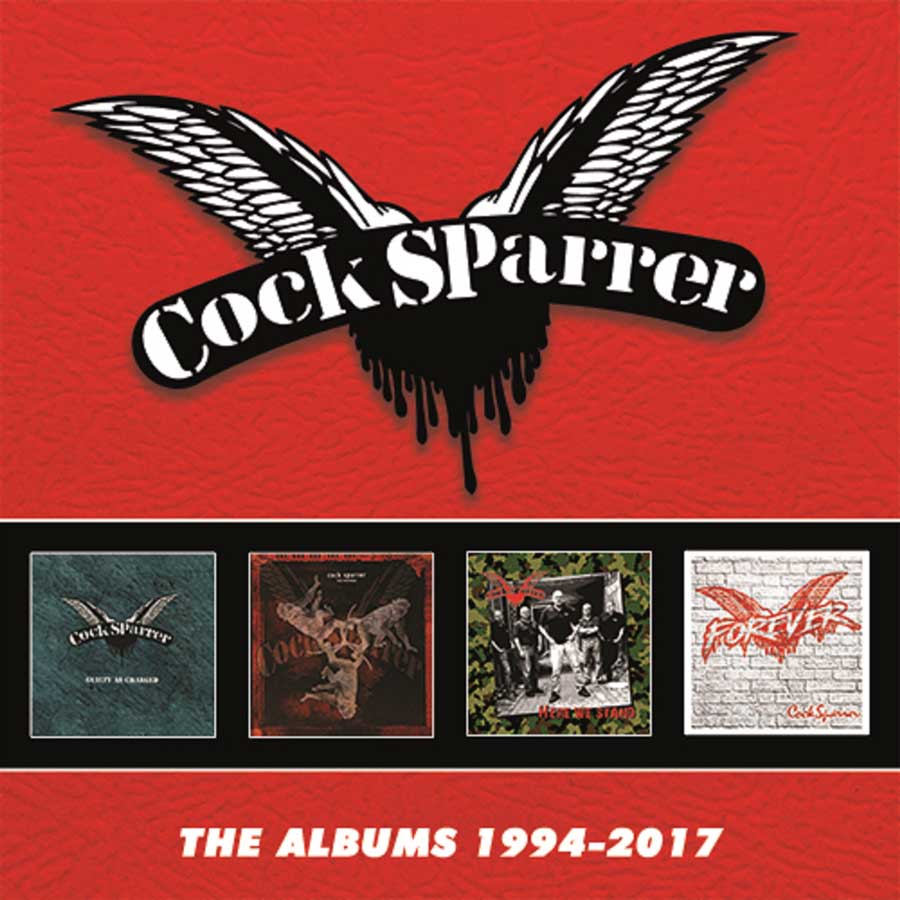 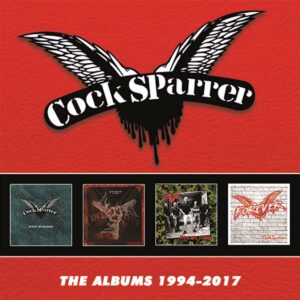 Following on from the recent boxset which housed the Cock Sparrer albums from 1978 to 1984, this time round we have the four studio LPs the band put out since their semi-permanent return in 1994 including last year’s well-received Forever collection…….Ian Canty hears the second or more accurately third coming of the Street Rock & Roll legends…….

When Cock Sparrer re-emerged in 1994, they added guitarist Darryl Smith to the original foursome and this line-up of the band has remained in place for the last 24 years. Quite a considerable time for any band in itself and this version of CS recorded the four albums presented here on this new boxset. Ceasing operations after the Running Riot in 84 album, the demand for live appearances of the band was still great and admirably not wanting to rest of their laurels (which can be read about here), they took to the studio for sessions which would result in the Guilty As Charged LP, which emerged in 1994.

Though all sounds good (the album was remixed by Smith in 2009 to improve the sound as apparently the band spent the monies set aside for the mix in 1994 on the more pressing needs for refreshment), this isn’t my favourite Sparrer LP. Some of the song writing isn’t quite as rich as their best efforts, though having said that Last Train To Dagenham and Because You’re Young are right up there. The former will have anyone who has ever boarded the milk train (that stops at every lump of concrete between where you got on and your port of call) certainly more than nod in recognition and the latter has gone down as a staple of the Sparrer live set. Even though the members of the band were well past their teens at the time, Because You’re Young is the perfect encapsulation of the frustrations and dreams of adolescence.

On the less positive side, Strip is a ill-advised sequel to Sunday Stripper and the other follow up, I Fit Central Heating (Working Part 2) feels a bit whiskery with imagery seemingly coming direct from Confessions Of A Window Cleaner! Guilty As Charged is just missing a couple of quality tracks to substitute for the lesser material to make it as very good LP. Odd that they had a couple of tucked away and ready in Run Away Johnny and Why Can’t You See?, which were instead issued as their first single since 1983. They’re included as bonus tracks thankfully and fine enough they are too. The other extras are live takes of Sunday Stripper, Secret Army, Because You’re Young, Chip On My Shoulder and We’re Coming Back which are all pretty good and lively.

To me Two Monkeys (cryptically coming housed in a cover featuring an illustration of three monkeys) was an improvement, with more consistency and better songs. The writing is sharper, that’s the key because Sparrer could always be relied on to deliver the goods instrumentally. The standout here for me is Battersea Bardot, a tribute to ill-starred actress Carol White. It is beautifully touching, compassionate and sympathetically played too. Ok this sort of thing wasn’t typical Cock Sparrer fare but I wish they had done more in this style – it is both masterful and heartfelt, not mere boot-boy fodder, proper skilful song-writing that could be judged against most anyone’s work. Having said that, East End Girl has some of BB’s warmth too which is pleasing too.

More standard but still good are the chippy opener A.U., which stayed in the band’s live set for a number of years and Lies, a classic example of Sparrer’s street sussed sarcasm. The final part of the Working trilogy I Live In Marbella is better too, giving a happy-ish ending for the ducking and diving protagonist in the Costa Del Crime. They finish things off here with a cover of the 1970 World Cup song Back Home (penned by Martin and Coulter, a Scot and an Irishman) and Goodbye, a dewy-eyed anthem intended to be the last farewell of the band. It wasn’t to be, because more rapturously received live work would see Cock Sparrer back in the studio come the new millennium.

Continuing the upswing, Cock Sparrer finished their album career (possibly?) and this set with two records that could sit comfortably alongside with their best. I wrote about last year’s Forever album here, no need to go through that again as it is a straight reissue with the same bonus tracks, a quality LP nontheless. Here I Stand came out in 2007 and is the only Sparrer album I didn’t previously own. I’m not sure why this came to be, but I was glad to make up for lost time on finding it included on this set.

The album starts off in fine style with Too Late, a great effort in the mode of Evacuate-era Chelsea documenting how the cards are always stacked against ordinary folk. It never really lets up all the way through. Following on, Gotta Get Out is the kind of song you’re singing along to before you reach the end of listening to it for the first time, so catchy. They certainly knew how to build up a song. Spirit of 76, which was released as a one-sided single, is a throwback to Where Are They Now from Shock Troops in a way, a look back at their distant Punk past. It is a more positive viewpoint this time round though and allied to a groovy Glam Punk feel, great stuff.

Snappy riffing enlivens the comical Last Orders and Did You Have A Nice Life Without Me? is again a great piece of songwriting, a bittersweet documenting of bumping into one of the ghosts from their past. Musically the band are on top form throughout, what a guitar sound on this! On Don’t Stop they sing “all it takes is a little common sense” and in a nutshell that’s the Sparrer magic – simple and effective. The bonus tracks with this disc are new takes of Because You’re Young and England Belongs To Me (with UFC fighter Dan Hardy who used it as his theme) which are decent, but not really that different from the originals.

That Cock Sparrer went onto record into the 21st century is something no-one would have put money on when their career seemed done and dusted after Decca dropped the band in 1978. That they did and more than that prospered was a testament to the band’s tenacity, self-believe and talent plus the fond memories of the earliest Sparrer supporters that gave them the impetus when they dipped their toes again on the live circuit. It is scarcely believable that an outfit heading towards their half century together could put something out so vital as Forever, but they did it and the other three albums included here are more than worth your while checking out if you have not heard them before.

The lengthy gaps between albums may have meant that they had a chance to sift out lesser items, it certainly seems the case that quality control was exercised well on the run of the four albums presented here. There are a few lapses on Guilty As Charged, but we can let them slide, for the sheer quality of their remainder on show here. It might be asking a lot to be remembered “Forever”, but they have the happy knack of constructing tunes that burrow their way into the subconscious. Lyrically the ordinary problems of life, that even talented writers struggle to put convincingly into songs, just ring true here – it feels like child’s play for Sparrer. A boxset with real depth that is consistently enjoyable.