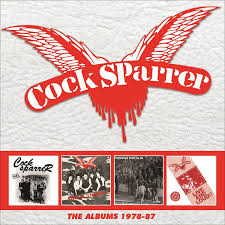 Not long ago the newest and possibly last Cock Sparrer album Forever came out (reviewed here), but now we go right back to the start with this new collection which brings together the four LPs they recorded for Decca, Razor, Syndicate and finally Link Records.

The self-titled 1978 album slipped out well below radar, apparently being issued in Spain only. The reasoning behind this decision seems to be lost in the mists of time and really this was not so much an album as the four previously released single sides bolstered by some demos recorded while the band worked under the auspices of Orange Music, their manager’s Cliff Cooper’s company. By the time the LP emerged relations had pretty much soured between band and label and the Sparrer boys themselves only found out about the release long afterwards.

The band had a good few years behind them prior to inking the deal with Decca and had played with lots of pre-Punk bands that would have a bearing on how things panned out in the summer of hate. Probably most telling was a number of gigs they played alongside the Heavy Metal Kids – Sparrer took Gary Holton’s yob image and stripped it of the theatricality, taking it right back to the street, plus adding a sizeable pinch of the Small Faces rough but chipper charm.

Those early singles showed their 60s influences as they gleefully stomped through the Stones We Love You and Sister Suzie comes on like a Cockney MCS would have circa Back In The USA, given a shot of Blues. The flipsides of these singles were two out and out Punkers, the muscular Runnin’ Riot and Chip On Your Shoulder ticking all the right rebel rock boxes. The original foursome of singer Colin McFaull, guitarist Micky Beaufoy and the rhythm section of Steve Bruce and Steve Burgess had been joined by Garrie Lammin at this point in time and he bought with him a genuine song-writing talent and a Punk attitude.

The rest of the band’s early material would also feature this two-pronged approach. They verged on Hard Rock at some points and Colin’s voice is a lot higher on some of the songs here than later on, particularly Teenage Heart and a low fidelity recording of Run For Cover (one of the bonuses included on this disc). On Again And Again the two styles are fused into a great Street Rock jam that has stood the test of time. Sparrer bear some comparison with Rose Tattoo at this stage in their existence, though they predated that band by a few years, forming as far back as 1972 I believe.

Of the more Punk-toned offerings Taken For A Ride is a stormer and What’s It Like To Be Old (another bonus) a neat generation gap tune. The band could certainly rock and appeared to have all the right credentials, but for one reason or another it never happened and with the band’s two singles sold poorly Decca swiftly lost interest. Though this album was put together in a piecemeal way it would have been a decent showing if it had been allowed a proper release.

One thing is this set claims to round up all the material recorded by the Garrie Lammin-era band, but I can vaguely remember another version of Teenage Heart and a semi-instrumental Chip On Your Shoulder and on checking these are on a Rarities album of theirs. I suppose you aren’t missing any rare songs, but it does feel a little incomplete. A positive is you do get this disc in a facsimile of the original sleeve and the label is nice too, in the classic “Decca” font.

Soon after the record saw daylight, the band were no more. Three of this line-up joined Mod-ish band the Little Roosters who recut I Need A Witness with Joe Strummer producing. Other than that little was heard from the Sparrer boys, with the odd track cropping up on a compilation or two, until they regrouped for a rapturously received appearance at the Bridge House. With some of the old material featuring on the first couple of Oi! LPs, Cock Sparrer returned in late 1982, with the original quartet cutting the England Belongs To Me single for Carrere Records, where they were labelmates of Sheila B Devotion! Originally entitled London Belongs To Me, perhaps if they had stuck with this title it would have avoided all manner of problems in the future? Even so it was an infectious anthem that didn’t deserve to disappear without trace as it did.

Cock Sparrer are pretty much unique in the Punk world, being a band who are best remembered for a comeback album, namely Shock Troops. Now when I got this set I spent a good while listening to it to try and work out its enduring appeal to a wide range of people. I knew already why I liked it after all, but listening afresh did reveal a few new wrinkles and a theory, for what it is worth. Now I reckon that Shock Troops shares a little something with Ian Dury’s New Boots And Panties in its spirit (not in its sound or vocals, which are completely different). Both records are full of self-contained songs that work as a whole, nuggets of ordinary London people sometimes pushed to extremes. Also, just as Dury used his frustrations with the Kilburns to forge his most complete work, Cock Sparrer employed their experiences with Decca and in their lives to imbue their songs with a hard-bitten wisdom that just rings true. New Bovver Boots And Panties, if you will…

Anyway that’s just a theory, but there’s no denying that this is a highly enjoyable piece of work. Their rock-solid musicianship had already been established and provides the backbone, enhancing the already strong songs. One of the lesser offerings, the Clockwork Orange themed Droogs Don’t Run is effectively Teenage Heart with different lyrics, but that is the only backward glance musically at least.

It all works though and the quality of Secret Army, Riot Squad and Watch Your Back cannot be denied, all adorned with massive infectious choruses, punchy chops and clever words. Where Are They Now and Take ‘Em All are cut with the experiences on the Punk scene and how it all turned sour – alternately wise and acidic reflections on the music “industry”. As if to prove they’re not a one trick pony they turn in the glistening, joyous anthem of We’re Coming Back and end a tremendously satisfying listen with the sultry and slow Out On The Island. A complete record in the best sense, though we have the three tracks recorded for the Carrere single as bonuses and they’re nice to have, they sound inferior compared to the album proper. How could they not?

After this highpoint, we move onto the most Un-Cock Sparrer album in their discography, the curate’s egg of a record Running Riot In ’84. Partly for this reason, I found it very enjoyable. Micky Beaufoy had left at this point, with Shug O’Neill and Chris Skepis now handling guitar duties. Cock Sparrer were light on songs at this point and cut “live in the studio” versions (a modus operandi they would return to not too much later) of Runnin’ Riot and Chip On Your Shoulders to boost the LP’s running time. In many ways the “lead” track of the LP, The Sun Says was classic Sparrer though, demolishing that odious tabloid in a few simple but wise stanzas.

The ringing guitar and disco drums on album opener Run With The Blind that nudge the band towards a Post Punk sound is the first clue things aren’t quite the same as Shock Troops. Price Too High To Pay even features washes of synth noise over a more standard Sparrer sound! It is not the last time electronic effects are used on Runnin’ Riot in ’84 either and I can now applaud the band for trying something different (at the time I confess it threw me a bit). After all, by 1984 the UK Punk scene was collapsing.

On the negative side the drums are sometimes a bit leaden on here and the production isn’t great in places, gutting the natural power of the band occasionally. On balance side two of the album was much the better, with the aforementioned The Sun Says, They Mean Murder (which could have been Secret Army Part 2) and Closedown being strong efforts and the two old favourites shine too. I rather like the different sounds on this album, but perhaps a little more time and a couple more songs the equal of the ones mentioned above they could have come up with a classic follow up to Shock Troops. It was not to be and although the LP did make the Indie charts, it wasn’t too much of a surprise when Cock Sparrer ceased activities again soon after, until a reformation in 1992 which has seen the band active in fits and starts ever since.

Live And Loud, an after the fact recording issued in 1987, wasn’t a bona fide live album at all, with the band actually playing as live in a studio environment. If you can ignore this slightly dubious device, it is a good recording and does at least solve the notoriously difficult process of trying to capture a band’s strengths in the live environment. Cock Sparrer here do vary things a little, extending a guitar break here and there and overall they present a convincing facsimile of their live set. There’s the standard wobbly go at White Riot (very few bands got that one right live – even the Clash struggled a bit sometimes). Only The Sun Says makes the cut from the third LP, with Shock Troops and the singles providing the rest of the material. Live And Loud is enjoyable enough but not really essential.

There is a lot of good music on The Albums 1978-85, but the main drawback would be that there is no rare material has been unearthed to tempt the hardcore fan. I know the band recorded sparsely at the time and guard their legend well, but it would have been nice to have at least the Oi Of Sex take of The Sun Says and the two 1977 demos that did feature on the Rarities comp of 15 years back. Having said that the booklet has a few gems of information I certainly wasn’t aware of and the whole thing is well designed. With the albums they recorded during the time period this boxset concentrates on, Cock Sparrer cemented their position as purveyors of high quality, intelligent and gritty Punk Rock, so if you don’t already own this music, I would advise you to check this compilation out as perfect primer.