There’s lots of skinheads here; but before you jump to your usual prejudices these are the anti Nazi or apolitical skins and there are more black and Asian people here than any indie gig I have ever been to.

The skins have studied the UK 69 prototype and dress sharp in classic skin gear; they looking for a good time. The main batch of bands on the bill sing a style of music that has morphed from punk and Oi street punk into a stripped down and more brutal form.

It’s a long way away from the punk I grew up with in the late seventies and consists of very guttural gravel voiced singers, complex bass lines and metal tinged guitars that nod towards US hardcore. The bands play stripped down tough core, crossed with what sounds oddly like German oompah music. A curious mixture that turns the songs into oompah songs that the audience sing-along to with their fists in the air.

It’s all very amiable, curiously amiable, there is not much mosh pit action just loads of jolly singing along and it’s into this atmosphere that the festival promoters and co-headlining band Krawall Bruder enter.
The band have become punk folk heroes in Germany with their relentless touring,, anthemic songs and very sharp command of street marketing- a combination which has made them crack the German top 50.

They have perhaps created the archetype for this German Oi/oompah cross over and their good time songs are relentlessly powerful and aggressive in an upbeat kind of way. Their lead singer, Pascal, is a one man DIY machine whose generosity and good spirit is crucial to keeping this festival positive.

He knows his music is on the other side of fashion and is termed grey zone- as in not Nazi but not anti Nazi- by the German media. What he won’t tell you is that when his band tour they sit on the door and make sure that the occasional punter with a Nazi badge or t shirt is allowed in and if it kicks off in the car park with the nazis later they take care of it themselves.

Luckily this is not something that happens a lot and their sold out gigs are full of people having a good old sing-along to a modern and very noisy and very noisy German folk music.

The band are totally connected to their audience and their songs are soundtracking a beer stained weekend perfectly.

In the last few years they have graduated to punk legends which for a band that started as 16 year olds in 1972 is quite remarkable. Pre punk they were playing that kind of proto punk street rock n roll that existed to the edge of glam like The Faces, Heavy Metal Kids they were signed during the punk period and released a clutch of songs, like their debt single Runnin’ Riot, and their sharp cover of the Rolling Stones We Love You that should have been hits but, like their northern equivalent Slaughter And the Dogs, they disappeared through the cracks.

They had the songs but they were not art school punk and were trapped as what seemed a footnote in punk rock history until street punk kicked in the early eighties and the band were looked on as pioneers. It still took another 20 years before they got this big but by the late nineties they were real genuine punk legends and had got there with no media or music biz help.

Tonight is the best I have seen them. Their songs sound powerful and more energised than usual and are very catchy. It’s like a snapshot of original punk; there is a touch of Clash first album and that proto punk I was talking about earlier. Meanwhile the packed audience know every word and Cook Sparrer are getting greeted like returning prophets.

There is something heart-warming about seeing a band, for once, getting the pay back for all their work over the years and as they end their set the band are at the peak of their powers which is breaking every rule in the book of rock.

Cock Sparrer, like Krawall Bruder, are in many ways closer to their own nation’s folk roots, this gives their music a certain truth and an instant connection with the audience. Powerful and simple songs but everyday life that have gone worldwide.

They are looked on as being pure and untainted by the music biz and are one of the last relics of a very different era when an electric guitar and song meant everything and that is perhaps the beauty of this band.

Interview: Henri Herbert on life in Austin Texas and plans for 2021 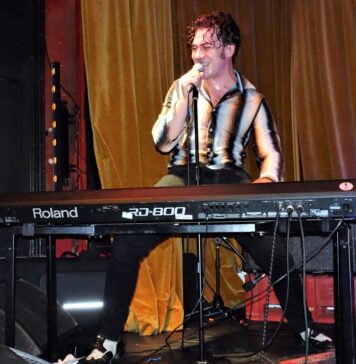 Glastonbury cancels but will other festivals still be on in 2021?

Interview: Henri Herbert on life in Austin Texas and plans for...