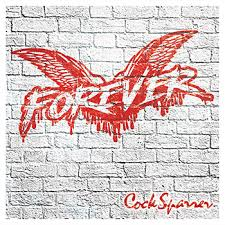 Cock Sparrer, who took their name from the jovial Cockney greeting Cock Sparrow, have a history which goes back way beyond the Punk Year Zero. In fact they came together as far back as the early 70s, being formed as far back as 1972 by four schoolmates Colin McFaull, Mickey Beaufoy, Steve Burgess and Steve Bruce, all of whom have lasted the course through 40 plus years (with “rest” breaks). This longevity mainly boiled down to the fact they have remained friends throughout, a feat in itself in the dirty old Rock & Roll business.

Sparrer were put together by these four lads in a style that took much from their influences, given an East End Boot-boy twist: such as the chirpy cool and soulful vocals of the Small Faces, the initial “hammer” of Marriott’s later group Humble Pie, Glam Rock’s primal thud with particular relevance to the live majesty of Slade added the chaotic and kinetic live thunder of the Who. They mixed this all up with their own belligerent charm and subsequently presented themselves to the Pub Rock scene with a burst of the kind of teenage aggressive attitude that would be a calling card of Punk later on. By the middle of 1976 they had played alongside bands such as Thin Lizzy, Motorhead and the Heavy Metal Kids (Holton’s cheeky Cockney stage presence may well have rubbed off a little on the younger band), impressing with their energy and street level approach.

The gathering storm out of World’s End took notice and as legend has it Malcolm McLaren visited them on their own turf (wearing spurs!), mooting a similar managerial agreement to the one he enjoyed with the Pistols. The band rebuffed him for not getting his round in and this scuppered Sparrer’s chance of a place in that Punk “inner circle”. No matter: they quickly engaged the talented Garrie Lammin as second guitarist/songwriter and were signed up by 60s recording giant Decca Records. Now Decca had massive success with the early Rolling Stones but by 1977 were in a terminal decline, but somehow they managed to piece together a “Fantasy Football” Punk roster of Sparrer, Slaughter and the Dogs and Adam and the Antz (I tried to put that d backwards as well, but you know what I mean).

Decca’s dwindling clout meant even bands with that much obvious potential sold practically nothing, but even so Sparrer managed two classic singles (Runnin Riot and Chip On Your Shoulder/We Love You) and a LP which was only released in Spain for some obscure reason. The NME sniffed “Punk for the Woolworths (ask your parents! While you are at it you might as well ask about the NME too!) crowd”, but something obviously clicked with the less fashion orientated and more “street” Punk kids and their reputation which goes before them even today was sealed with those early platters.

Cock Sparrer split soon the LP’s release in 1978, with members going onto Mod/R&B band the Little Roosters, Uncle Joe Strummer taking them under his wing and producing their 1980 single I Need A Witness (also demoed by Sparrer). However with the advent of Oi!/New Punk they were thrust back into the limelight and in 1982 they reformed (now without Lammin who now fronts the excellent Bermondsey Joyriders) to release the England Belongs To Me single issued, rather oddly, on the Disco label Carrere (home of Sheila B Devotion’s hits). The positive reaction to their re-entry onto the scene resulted in two albums on the Razor label in the next two years, the highly rated “Shock Troops” (which still forms the rump of their live set today) being outstanding, bitter at times (Take Em All in particular detailing pithily with their rough dealing with the “music industry” during 77-78) but ultimately optimistic and life-affirming.

Since those days there have been various amounts of down time interspersed with flurries of activity, with albums Guilty As Charged and Two Monkeys in the mid-90s and 2007’s Here We Stand, plus festival gigs and some US dates. The band have been increasing feted for their 70s work by newer bands like retro-Glam Punks Giuda, their repute riding high after spending so much time in the doldrums. 2017 finds them on the verge of their first UK tour since the 70s with Daryl Smith now firmly ensconced as second guitarist and a new album, Forever, which is what we have before us…..

What is immediately evident on hearing Forever is that Sparrer have skilfully managed to update their sound without making major changes – despite some influences showing through at times, you always know it’s Cock Sparrer you are listening to. There is also a sense that this new album is an event, because they have guarded their mystique well by not playing live or recording that often. 40 years on they could have been forgiven for sounding a little less than vital, but the opening track One By One is a pacey restating of the Sparrer way (though having a little of the irrepressible Buzzcocks in the speedy guitar figure and drums shuffle), it quotes their classic Take ‘Em All during the course of thrilling noise Pop Punk treat as if to say “nothing has changed, we’re back in business”.

What follows in its wake is all good and some great: for instance the long pull to the joyous, hopeful chorus of It’s Gonna Be Alright is delicious, Family Of One is a typically tuneful Cock Sparrer tale of treachery and if the Clash provide the blueprint for In My Town, lyrically it’s a lament straight from the heart of the dirty old city in classic Sparrer style.

The whole LP is imbued with the kind of big tunes and wise, hard-bitten logic Sparrer have stamped out as their own. Sounding as good as ever in 2017 thanks to a bright production by guitarist Daryl Smith and James Bragg, it’s all played with relish and enviable musical chops. Colin’s voice is powerful almost throughout, perhaps a little hoarse at times – it’s funny when the instruments drop out on Don’t Tell Anyone Anything the band actually all work pretty well together vocally, almost harmonic, something I’ve never noticed about them before.

As we listen on the universal lyrical concerns of Sparrer show their hand, where trust and betrayal are just two sides of the same coin for the ordinary folk who still carry on through all the defeats and hardships. It could easily slip into some kind of self-parody but the fact they are pretty deft song-smiths keeps it feeling authentic and true. Take for example Somebody’s Brother, Somebody’s Son which deals with the aftermath of fatal stabbing: the verse towards the end of the song which shows how a victim’s family’s lives are negatively shaped by one split-second stupid incident, told in just a few simple phrases. Now it takes real skill to bring things like this so vividly to life, to touch the heart like that and make people really think.

Though as we journey through Forever we witness double dealing, violence and the bitter sting of the truncheon thing, they end (well for the LP proper) with the hopeful anthem Us Against The World, leaving us with the positive message that if we stand together maybe, just maybe, things will turn out alright. It’s a clear and plain message of sticking by your friends, family and the people that matter, that is no less moving for it’s simplicity.

Of the bonus tracks Sons Of The Millennium and the CD closer We’re The Good Guys are probably the picks. In the former the band appear on the other side from their old song What’s It Like To be Old, taking up on the side of the young kids who do get as a rough deal as they did back in 1977. We’re The Good Guys, full of their typical cynical humour, but you know it’s a fitting end – yes still rough and ready but still with their East End charm and honourable working class values intact, armed with the crucial knowledge that tunes, never, ever get old.

In summary, Forever stands as a testament to Cock Sparrer, their unerring knack for providing authentic vignettes of ordinary life, their deep friendship and above all their way with a winning melody. Though there is a possibility this is their last record, one thing you can’t do with Sparrer is count them out…..so here’s to the next one in 2027!