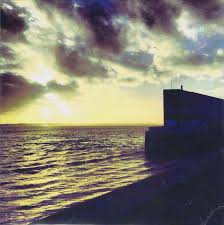 Cobby & Litten – My People Come From The Sea

Steve Cobby was half of ambient / techno/ downtempo act Fila Brazillia, now a solo artist with a variety of collaborations and remixes (including Radiohead) to his name.

Russ Litten is a renowned author (Scream If You Want To Go Faster, Swear Down, Kingdom) often compared to Irvine Welsh and ” a stunning new voice in British fiction”.

They are both from Hull. When they met, it was murder… actually it was a collision of art, politics, music and words.

Ged Babey hates both techno and short stories on the radio, but was floored by this album.

Waldo Jeffers had reached his limit…

It was Dark Actors who put me on to this…. the first album to give me a jolt out of my music-as-just- entertainment complacency since Sleaford Mods Key Markets.

(When I next proclaim that the latest bunch of skinny-jeaned young, white boys with guitars have made ‘the album of the year’ remind me that this album exists.)

Part spoken word / story-telling, part downtempo techno/electronica/ambient put together by two 50-year old blokes in a shed/studio in Hull in  “the year of our ham-faced Overlord 2015 “, this is the single most remarkable and important album of the year, 2016.

(Quite a statement that.)

Well, if a couple of listens can convince me, a 52 year old music fan who has spent 40 of those years listening, mainly, to ‘rock’n’roll’ that maybe his time might have been better spent reading and listening to electronic dance music, then, yes, it is an important album to me personally, but I am sure others will think the same.

It combines two disciplines, or rather merges them together, weaves them seamlessly and seemingly effortlessly.   A man reading his stories ( or prose, poetry, fragments of memory put into words) and a DJ/producer/artist building a minimal, unobtrusive yet vital, musical and rhythmic platform for them.

( This kind of thing has been done before. Aside from the Gift, the only time that springs to mind is William Burroughs and Material on Words of Advice. )

If they were separated and presented in isolation, the words and the music, to be honest, chances are, I would have dismissed both as ‘boring’ and ‘depressing’.

The thing is… together, it works. The beats and repetition of the music keep your attention on the words, which are at times, poetic and extraordinary. The music is the discipline to stop your attention wavering,  The spoken words are Northern accented. the narrator sounds, at turns, melancholy, a bit pissed, stoic and weary; the topics are basically, how shite life is, and how all we have is imagination, our humanity and a tiny bit of hope and humour to get us through.

The stories are gritty real-life tales of how some people live now, and memories of life in Hull in the early 80’s. The characters  are a “Young Mother Hubbard” shop-lifting and Arthur, who has been out of circulation for 3000 days, going to the cafe and the pub. There is a man under instructions of “the Noonday Demon”, teenage glue-sniffers, ex-cons and builders of imaginary spaceships.  And the people of Hull, who ‘come from the sea…. come from deep water, like deep water and are in, deep water’.

Desperate lives and  among them some surreal moments. Hitch-hiking to be confronted with a very strange request from the driver.   ” Stop the car. I’m gonna be sick”.   If the stories tend to be downbeat, the music is correpondingly downtempo or mid-tempo.  Electronic pulses and clicks and beats. Strange tales, unusual tempo’s.  Stark words, crisp, cold music.  Inextricably inter-twined as if it was totally intended to be this way and no other.

I admit, I  had never heard of Russ Litten before (or Cobby for that matter). He seems to be an gifted storyteller from the ten tales told here. He is ‘Writer In Residence at a prison in the north of England” and I can’t see the Irvine Welsh comparison, he’s more like a 2016 K-u-H version of one of the Beats or Angry Young Men writers from the Fifties.  He can be talking about  “the culture of defiance, the culture of deference’ one minute and about how a kid accidentally bit off his tongue when he was young  “flapping, gasping like a pink fish on the floor” the next.

Filthybroke, the label have produced only 100 CD’s and describe the album thus;  It is music from another dimension, and it is also multidimensional. Litten’s spoken words weave intricate stories into Cobby’s world of mechanical sound, and it is unlike anything we have ever heard.  No PR bullshit for a change, just the truth.

Oh, and two songs at least of the ten do by sheer coincidence, sound a bit like Sleaford Mods. One is called Tinder Surprise. I had to google it as I was only vaguely aware what Tinder is. It means “Meeting up with someone you matched with on (Dating App) Tinder. However they are the not the person you expect and end up being twice your age with no front teeth.”  Have a listen.

“Musicians are like builders, only with trumpets and pianners instead of lathes and hammers.” says Litten in one of the pieces.  Cobby is a master craftsman. His subtle use of syncopation to keep a rhythm for all-important gaps in the text, which give it the required atmosphere and tension is very skilled.

The epic twelve minute ‘Under The Flyover’ is in particular, the track where the partnership comes into its own.  Just a heart-beat to begin a Dickensian journey through decades of memories and pain. Percussive rattling and steamtrain chug in the background.  Littens voice trails off completely at one point.  Smoke signal synth and ACR-style percussion bring things back on track. “Gi’us a song” calls a character in the story and an almost-rap follows from another:

Prison stinks of bleach and sweat,  boiled-up cabbage and regret.….. {and ends} … Prison stinks, like an egg gone black, so take big sniffs and don’t go back.

Apricity is a welcome piece of relaxed, thankfulness for small mercies with waves of synth lapping like the tide over the poetry’

Tinder Surprise as you can hear is a black-comedy highlight which you’ll want to hear time and time again.

But the closing, title track features a surprise appearance in the text by Harry Dean Stanton  “Harry Dean, the beloved outsider”. Litten loves Paris Texas it seems and Cobby uses lap-steel to echo the affection over a football-kicked-against-a-garage-door beat.

As I said, this is a remarkable album. A unique piece of work with a political fist inside its art-y glove.  Language and Location.  Working Class identity and alienation.  Moments of unreal and dark, dark humour and beats that make you laugh & cry and words which make you wanna dance… or maybe the other way round.

A cleverer person than me, in the Guardian, will probably tell you that this album is a brilliant encapsulation of the mood of post-Brexit Britain… which is bollocks… it just two blokes from Hull in a shed making Art for fuck sake.

All words by Ged Babey whose author profile is here.With thanks to Michael Eastwood for the introduction