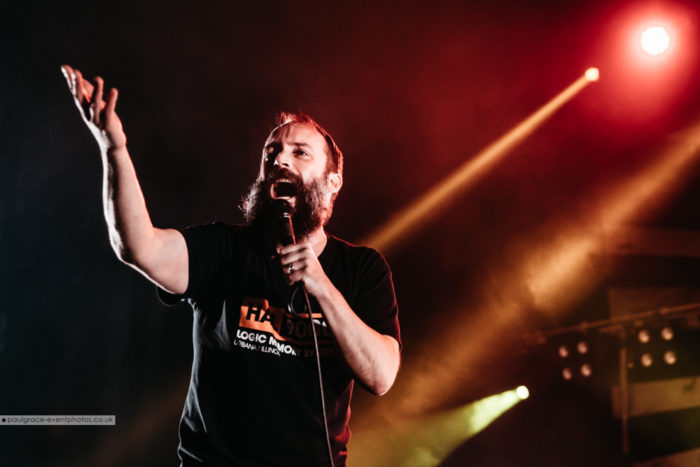 Maryland quartet continue to blaze a trail on the live circuit.

Clutch are one of the most honest and hardworking bands in rock and roll. As their tour in support of The Book Of Bad Decisions hit Manchester, they delivered another stand up show of solid, no frills, good time tunes.

As the band took the stage to their traditional walk on of Chuck Brown’s We Need Some Money the crowd recognise the funk classic as much a part of the show as Clutch’s material! ‘Let’s get down to it boppers,’ proclaimed Neil Fallon as he steadied himself and began building his unique rapport with the baying crowd.

How To Shake Hands opened the ever rotating Clutch set list. The chorus demands ‘straight talk and no jive’, this is the perfect mantra for them as the quartet rattled through nearly 90 minutes of high octane, punchy rock and roll. 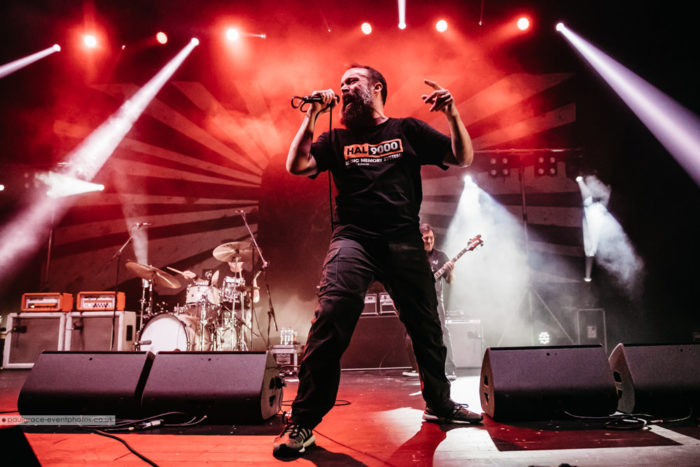 The new cuts continued with the thumping and groovy HB is in Control before a trip back in time with Mice and God’s.

With a quick thank you, Fallon picked up his own guitar for the first time in the evening for the ZZ Top inspired A Quick Death in Texas.

Amongst their catalogue there are plenty of songs that just demand to be sung along with. The Regulator was one of these instances as mobile phones were raised to try and capture the rapturous crowd bellowing the words aloud with the band. New album highlight, Emily Dickinson, also fit the bill with its supremely catchy chorus.

The ‘weaponized funk’ of In Walks Barbarella is possibly the standout track from the latest LP; as part of the set in Manchester it staked its claim to be a part of Clutch’s set for years to come. 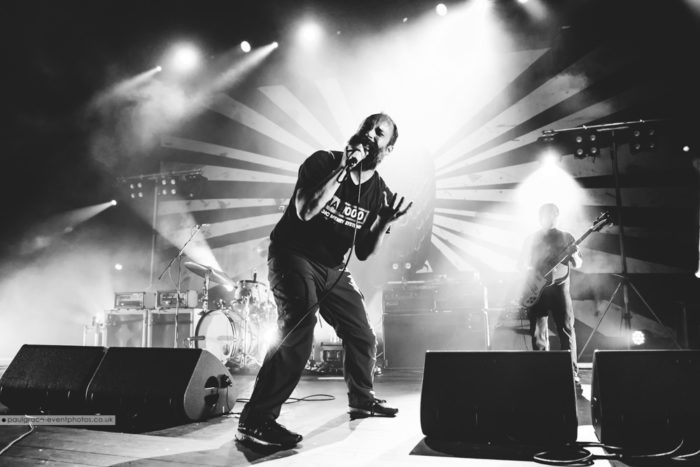 Confidence in new material is sometimes tricky to gauge amongst a band’s set. A new album could bring only a couple of tracks in the set whilst relying on former glory. Not for Clutch. Each song is equal to them and as such there is plenty of new material in the set.

With that being said, the Dobro style slide guitar driven Gravel Road had the Manchester crowd salivating as they moshed, stamped their feet and danced along with one of the band’s finest. The bass opening of debut album classic, Spacegrass, also gave the crowd opportunity to lose themselves in the haze of one of the bands most blissed out moments. A crowd member up front had brought some maracas which were used during the latter. Fallon duly noted the use of the percussion and continued to ask if they were ‘standard tuned.’

Picking up the guitar again, the enigmatic Neil Fallon thanked the crowd for coming out, encouraged them to keep up the good work, and proclaimed them to be ‘super-duper’ before a closing set duo of Electric Worry for which the crowd were white-hot, before a seamless segue into the riotous X-Ray Visions.
The only selection from 2013’s fabulous Earth Rocker was the title track, which closed out another productive day at the office for Clutch.

Clutch are hands down, one of the best rock bands on the planet. The sold out crowd in Manchester were testament to this. They return with vibrancy each time they bless our ears with new sounds. In short, listen to Clutch.

All photos © Paul Grace from O2 Brixton Academy, 21st December 2018. For more of Paul’s writing and photos go to his archive. Paul is on Facebook, tweets as @pgracephoto and his website is www.paulgrace-eventphotos.co.uk