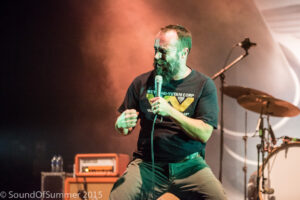 When Maryland based rock band Clutch come to town you know you are going to see a show.  Clutch rounded out their European tour with a near capacity gig at London’s O2 Academy Brixton last Saturday and with Swedish rock outfits Bombus and Greenleaf as support this was always going to be a feast for the ears.

With 11 studio albums to their name and a history stretching back almost a quarter-of-a-century Clutch have plenty of songs to choose from but you know that you will be treated to a performance that is loud, energetic and and full of passion.  Front-man Neil Fallon is one of those rare performers who draws you in, he is totally believable, his eyes cut through the audience like a laser almost daring you to look away from the stage.

As you would expect from a band who play dozens of shows a year they were tight.  From the opening notes of X-Ray Visions, the lead track from new album Psychic Warfare, Tim Sult’s guitar led the way as his soaring strings provided the backdrop for Neil’s lyrics.  During the opening tracks J-P Gaster on drums and Dan Maine on bass took the rhythm at a frantic pace, the combination of sound and the energy from Fallon is nothing less than spellbinding. 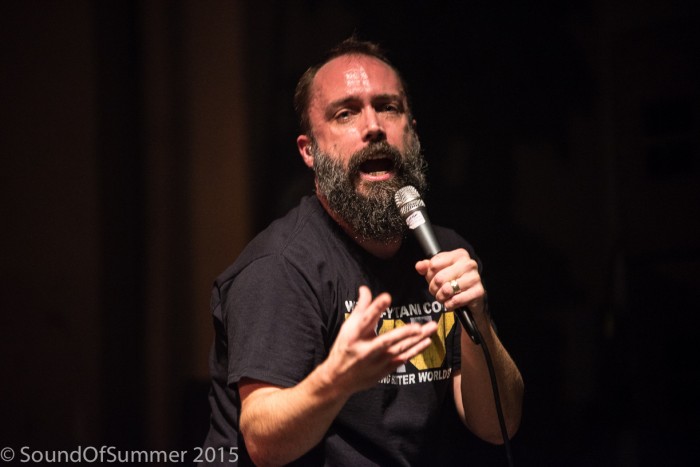 As was to be expected 14 of the 19 tracks played on the night were from the last two albums, Psychic Warfare and Earth Rocker.  Even long-time fans of Clutch point to these releases as being among the very best in Clutch’s history.  I did hear some fans voice their disappointment that fans favourite “Electric Worry” wasn’t played tonight but Clutch like to mix their set up as they tour and tonights set-list was a stunner.

Clutch front-man Neil is an enigma.  He cuts a small bearded figure on-stage but when he sings he becomes a giant.  A brilliant lyricist Fallon delivers his vocal with 100% self-belief, utter confidence and an engaging manner.  As soon as Fallon walked onto the stage you could see he was right up for it as he grabbed the mic and set aside the mic-stand and off he went, prowling around the stage, eyes piercing the gloom as he stared down the lens of cameras and pointed out members of the audience.  Every eye followed his every move.

Sadly for me (as a photographer) Fallon didn’t pick up his guitar until I had been kicked out of the pit, but when he did he added another layer of sound to the already impressive soundscape.  From where I stood the sound at the Academy was superb and Clutch play it loud. 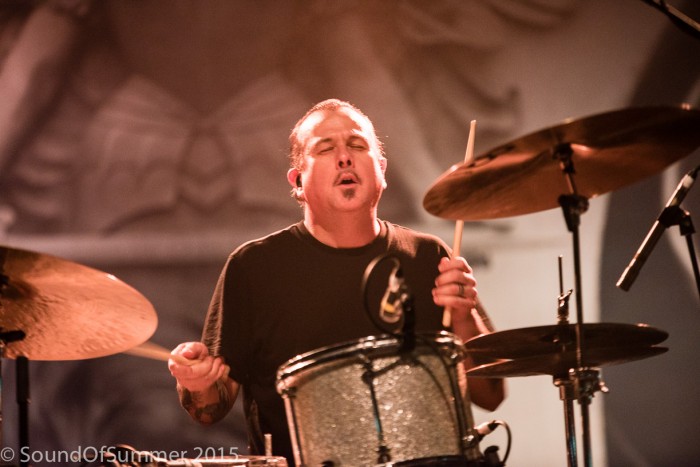 As Clutch played their way through a 90-minute set the stand out moments for me were the opening track X-Ray Vision, a blinding rendition of Doom Saloon and the encore songs D.C. Sound Attack and Earth Rocker, both from the Earth Rocker album.  The pinnacle of the performance was portrayed in the final track before Clutch left the stage for their encore.

Son Of Virginia may just be the best song that Clutch have ever written and by the look of the bouncing an arm waving that was going on in the pit many of the audience agree.

This performance by Clutch rates in the top three of the 100’s of bands I have seen over the course of this year. Clutch will be back in the UK for some festivals and hopefully another tour in 2016, get your tickets.