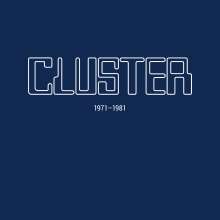 All the Cluster/Kluster you’ll ever need in one box.  Louder Than War’s Joe Whyte returns to the school common room and gets the patchouli oil out.

Back in the seventies, I was a spotty punk rocker at school in Airdrie, ten miles from Glasgow. You’ve probably all read the accounts of the prog-rock guys who carried the coolest, rarest, most out-there albums under their arms to school or in see-through record shop bags to try and impress their equally music-obsessed school mates and more so, impressionable girls.

I wasn’t that guy. I hated Rush, Yes, Genesis and all of the rest. I used to sneak into rec-rooms at breaks and try and stick on “Complete Control” or The Valves. There was, most definitely, a pecking order among the taste-makers of this group; Y’know, the old “I’ll raise you your Tangerine Dream and give you a Van Der Graf Generator” or “forget that, I had that first Ash Ra Tempel album on import before you’d even heard of them” type of thing.

Paramount, beat-that-if-you-can, numero uno, the big Kahuna, prima ballerina of the common room, though, was Cluster. German avant garde improvisational artists (in the proper sense of the word) that released a series of varying-penetrability albums throughout a lengthy career. Some of the early stuff, without being too much of a philistine, is either widdling,  unlistenable tosh or outre genius that influenced Brian Eno, Neu! Philip Glass and countless others right up and through the early electro-pop pioneers, ambient music,  and on to some of the current industrial noiseniks.

Me? I’m still undecided but thankfully, the first two albums notwithstanding, much of the Cluster canon is actually very, very good indeed. Starting as an experimental art trio, they changed their name from Kluster to the more conventional Cluster following the departure of Conrad Schnitzler, making the original trio a duo of Hans-Joachim Roedelius and Dieter Mebius.

They recorded eight albums in a ten year period (1971-81), two as collaborations with Eno and this set has collected them all. As well as a live set (“Konzerte 1972/1977”), the box contains two booklets with essays on each album and rare photographs.

The first one, Cluster 71, is as far removed from traditional rock music as to be from another planet and quite frankly, I guess that was partly the idea. Taking cues from Fluxus, Viennese actionism, the hippy movement, far eastern mysticism and the Frankfurt School, the duo crafted pieces (describing them as songs or tracks would just be nuts) using synthesizers, found sounds and conventional instruments played in unconventional ways to craft three meandering journeys into modulation. With little to identify beginnings or ends, the three pieces herein ebb and fade gently in some kind of cosmic symbiosis. Personally, (and I have to be honest) it occupies the same space and time as kaftans and guys talking secretively about “Red Leb” and it took me back to the seventies but not in a good way. It’s not unpleasant. It is certainly different. It’s definitely art. It just did nothing for me in the seventies or now in my ahem, more enlightened years.

Cluster 11 from 1972 is, to be fair, a little bit more of the same. The duo had set up camp in their native Berlin but the album was mostly recorded in Hamburg. One must remember that this was very much the pre-digital age and the synths of the time (not to mention recording techniques) were still utilizing hundreds of patch cables and unreliable buttons and faders to create their sounds. Studios were quarter inch tape-based and takes were often “live” or spliced together from a variety of performances by a tape operator wielding a razor blade and sticky tape. This album actually has a live performance in it although it’s for the most part studio. This record sees the first deployment of tape loops and a very primitive drum machine, (albeit sparsely) giving it more of a thematic quality. Again, much of the album. like ’71, is improvised on the spot. Later-legendary producer Connie Plank was involved, this time as director, and the tracks are shorter in length than the debut for the most part. It has a harsher, more industrial sound to parts of it, possibly reflecting their surroundings. One can hear them developing their sound on 11, and it is very much part of the tumultuous times that they were living through. Remember, this was the height of Cold War tensions. These people were literally waiting on the apocalypse happening on a daily basis.

Zuckerzeit (1974) saw Cluster moving to the country (they also formed Harmonia, with Michael Rother of Neu!) and the album was, at the time, described as two mini solo albums from the main protagonists. The drum machine is now virtually a constant and the pieces all seem to have structure. The other main difference is that the music is less willfully inviolable and has a lightness of touch previously unheard. One can clearly hear the birth of ambient music throughout the record. I guess, once again, the environment surrounding Cluster may have had an influence. This is a very likable album indeed.

Sowiesoso (1976) is a seven-cut album recorded in their home studio with the barest of equipment available. It seems to suit them; the music is focused, driven and clear. Harmony seems to have replaced dissonance and again, perhaps the bucolic surroundings profoundly influenced the playing. Acoustic instruments drift in and out of the electronic washes and it’s a pastoral odyssey. Quite beautiful at times, it’s one to return to, definitely.

1977 sees Brian Eno in collaboration with the duo and Plank for Cluster and Eno, unsurprisingly.

Eno is by no means a guest musician on this one, making his presence felt throughout. Having left Roxy Music’s tightly-wound glam in the distance, working with Robert Fripp and developing the baby-steps of his signature ambient sound that permeates the album, with the spacey excursions taking a back seat in favour of a more cultured, tranquil repose.

The following year saw the release of another collaboration with Eno;  After The Heat is artist-titled as Eno Moebius Roedelius rather than Cluster and certainly sees the Englishman take more of a leading role. Recorded at the same time as the preceding album, they felt that the more obviously Eno-inspired tracks warranted an album of their own. It is, without doubt, the closest thing to popular music recorded by Cluster (and affiliates) although the chances of it bothering the charts would be scanty then or now. It retains an otherwordly, modernism to it that defies description. If you’re a fan of Eno’s work, this is unmissable.

Grosses Wasser (1979) came wrapped in a monochromatic sleeve reflective of the minimalism in the recording. Six pieces, all of which are verging on chamber music, are as light and translucent as gossamer. Recorded at Tangerine Dream’s studio, this saw the departure of Plank and the use of many conventional instruments colouring the (by now) developing technological advances.

Curiosum from 1981 has a cover not unlike Linder Sterling’s Buzzcocks artwork. This was the only new wave influence as Cluster had embarked on another serene, hushed journey through ambient textures. It’s something of a return to the earliest two albums although with much of the harshness and astringency removed. This was really the last of the classic period Cluster albums and little was heard from them as a duo for some years. 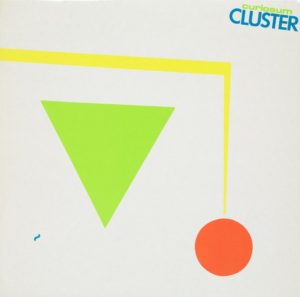 The live set, Konzerte,  is a mixed bag. Featuring pieces from two concerts in 72 and 77, the sound quality is variable, going from decent to awful. As Cluster shows could last six hours or more, it’s a document if nothing else of musicians pushing the boundaries of sententious music.

So, overall, a cracking if uneven overview of a group of musicians who were so far outside the boundaries of contemporary music as to be a genre all of their own.