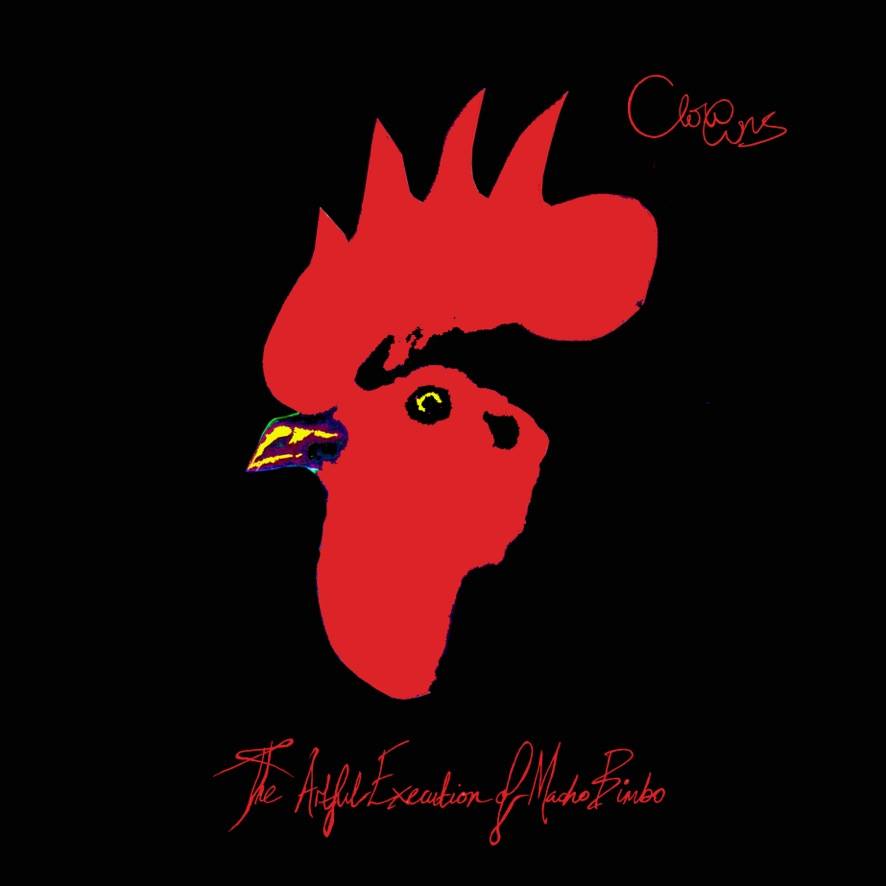 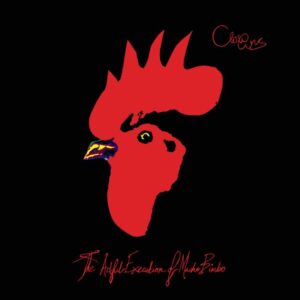 A strange & wonderful Art-Punk-Glam band from Brighton, CLOWwNS are possibly the best new band in the UK?. The Last Great Post-Punk Band?  Ged Babey puts on a red nose and his thinking cap.

“Everybody loves a Clowwn. Especially when they’re slashing your face with razor-sharp guitars and then dragging you relentlessly down some post-punk, seedy glam back alley for a syncopated kicking and a venomous discourse on the myths of masculinity in the modern world.”

And there is a big red cock on the cover of their album.

They are the best ‘new’ band in Brighton I am told. And quite possibly one of the best in the UK.

They are manic, visceral, sexy post-punk-art-glam rock with probably the most intelligent, literate singer since Howard Devoto.

Ladies and Gentleman, I give you, CLOWwNS. They come to save us from dull indie, heritage rock and low IQ Pop.

They have a great Press Release which says:

This album is punk rock produced to a pop aesthetic, with pop-art intelligence, high theatricality without artifice, but with plenty of licence.

“There was a need to create pointy-hat rock ‘n’ roll-art in a musical landscape that had forgotten its roots. Atmosphere is one thing, but a clear intent to affect has been missing. This is not reactionary zeal, but a re-discovery of ourselves and our artistic appetite. So, all shows are played as if our lives depend on it. All songs are steeped in poetic tradition, but not the ambiguity soaked world of modern rock. Nothing is ‘tossed off’. Titles reference the main body of the lyric, or are defined by it. Structures are played with and experimentation is rife, but this is still Pop-art. These songs intended to reflect lives lived. Live performance gives real contact with every audience, without concessions to convention. Each show can be vastly different, except in potency. Potent, urgent and desperate to please ourselves without any regard to what a crowd thinks we should be. In the end that’s why they love us…”

CLOWwNS  are my latest obsession but they don’t need any more praise as they seem pretty much in love with themselves anyway. I discovered then through this stunning review on the Quietus. Next day my old acquaintance Nigey B from Brighton lambasted LTW for not including CLOWwNS in our half-way-thru best-album round up of the year. Rightly so.

I love CLOWwNS because they make me think of….Devoto’s criminally overlooked Luxuria, (Punishment of Luxury, Adam & the Antz as I said),  early Monochrome Set. Bauhaus.  (a tiny bit of) the Birthday Party) the Cardiacs (although I’ve never been a fan so I can’t really tell)  Ziggy period Bowie.  David Devant & his Spirit Wife (only much grungier)   and mcclusky (who were Genius).  They’ve been compared to British Sea Power, the 80’s Matchbox B-Line Disaster, Queens of the Stone Age, Roxy Music, Sparks, John Cale, Nightingales  and others with varying degrees of accuracy…

Now this of course is  the WRONG reason to like a new band.   Whether these are all actual influences or co-incidental is hard to say but I should like CLOWwNS for being like CLOWwNS and after a few weeks living with, falling in-fatuation with Macho Bimbo I do love CLOWwNs for being who the are.

To an eighteen year old or a twenty-nine year old (who is not well-versed in obscure punk, art-rock & glam) though they must surely sound like the weirdest , most original band they’ve ever seen.

At first glance ( or listen) they seem to have an obsession with trousers and use the words Fools, Clowns and Idiot in their song titles, as if they are trying to reclaim the moron as some kind of seer and soothsayer.  The Dick Shall Inherit the Earth or somesuch art-school nonsense perhaps?

The production on the album, although good, at times buries the vocals under sludgey-yet-inflammable guitar and fuzzy wirey bass.  The guitarist is fuckin’ amazing actually.  God-like even. Not in an overly technical way but a getting a great sound way with sustain, wavering tremelo, skidding slides and brilliant noises kinda way.  The singer, who is regrettably called Miles, is a bit Bowie intonation-wise on occasion but that’s no biggie. His lyrics are conundrums. Unusual, odd, using a wide, non-rock’n’roll vo-cab-u-lair-y.

Bow-legged Man misses a lyrical turn of phrase by not using ‘he couldnt stop a pig in a corridor’ as a line and you can picture the singers dance-moves.

The early Antz comparison is purely musical – there are no naked ladys or bathroom functions or red red scabs in the lyrics.   A strangeness  and perversity replaces the sex and peversion.  There are a few La-la’s  and Oh! Oh! Oh!’s which are distinctly Antzy though.  The lyrics on the album generally “address gender roles, power politics and modern life in all its glory..”  say the band in typically poncey art-school style.

The Quietus  review drops names like Graham Green and Dylan Thomas as influences (in the same way as Dostoevsky and Proust inspired Devoto) but if  Eng Lit is not your thing there are plenty of rock’n’roll spills and thrills to captivate you without having to concentrate on the lyrics.

“Clowwns are helmed by the songwriting of Andrew Claridge (guitar) and Miles Heathfield (vocals), with backing from drummer extraordinaire Damo Waters and fuzz bassist Étienne Rodes” says the PR.  I exchanged a few emails with them and ascertained that Andrew is the wrong end of his forties  (and unashamed of his love of the Antz) , although the others are probably much younger.  They all seem to be or have been in other Brighton bands but this one seems to have really clicked and captured the locals imagination.

The videos they have made for Idiot Boucing and Shame On You  are to be frank, pretty crap low budget affairs and don’t present the band in their best light.   This badly shot but beautifully performed version of Ghost Town which they do as an encore maybe captures them better, sounding like Sparks and Dick Dale fighting over the song.  ( They also do Ian Durys Rhythm Stick in a similar fashion and are working on a latter-period Ants cover.)

Half way through writing this review and I looked at the Bandcamp page for the album , which has been out since June and I spotted the Info tags -which ordinarily says ‘lyrics’.  Each song has a mini essay telling us what it is about.  Written in wayward Humanities lecturer style, with snatches of lyric and Big Questions about Gender Roles, Existential angst, Desire, Religion, Death and Life.    Reading each (five times) listening and re-listening to the songs casts them all in a different light (intellectually speaking).  They are all quite possibly works of genius (if you’re a Grammar school Psued like me) or the most pretentious balderdash you’ve ever read (if you’re not and ‘your mind aint so open’)…

The desire to raise Hell is strong in this one. But what if the fantasy of ever lasting life were true? In our nature (“As simple as breathing”), some have a desire to ‘be bad’, or to do things that they know hurt others or themselves. Detention and punishment is at the core of all society, and this should act as deterrent, but rarely does. So then we rely on liberalism, that insists ‘nurture’ can cure certain kinds of ‘evil’ behaviour. Of course this is also at the core of civilisation. To understand and try to change.

Would the ‘idiots’ curtail this impulse if the rewards after death were impaired? I think that they would be disappointed to be forgiven their sins. Heaven for them is the ‘bouncing’, and a paradise without it would mean that their true nature would need a transplant. They’d rather go to Hell. This is just one of many flaws in different belief systems; an assumption that the ultimate goal for all creatures is peace and serenity, when it’s clear that many thrive on pain and conflict. It’s just a necessity for the rest of us to manage their behaviour.

CLOWwNS really are a marriage of philosophical thought and trash punk-pop culture.  It works best when you can enjoy it as both; trash-punk abandon and lyrical cleverness.  That said, the immediacy of She Says I’m A Clown and Trousers and that slashing, zig-zagging guitar, cranked-up bass and sex-beat mean that you can just dig the music without having to strain yer brain.

You may think I’ve rambled on too long… you may think I’m going off on a John the Baptist (or John Robb) style declaration of love and evangelsim about a band who are just ‘OK’.  But I do believe in this band and this album.  Even if they only last another few months and Miles buggers of to write a great novel / thesis / trilogy of Da-Da-esque plays performed blindfolded on stilts, I do believe that CLOWwNS are special.  The post-punk era has been re-examined to death, excavated and stripped bare perhaps yet CLOWwNS have found gold. Extracted that essence (rare) and are, in 2015, the last great post-punk band.