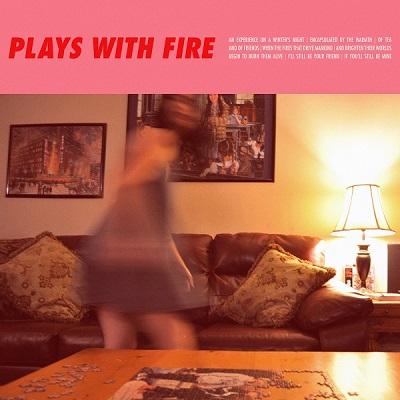 There’s something both sad and reassuring about the sheer number of albums released recently that are hinged on the agonies and anxieties of the twenty-something. Reassuring in their messages of solidarity, and in the idea that such feelings are seemingly ubiquitous, yet sad in the sense that such anxieties are as far-reaching as they are, and in the fact there’s little really that can be done to address them.

Though some might argue it as a case of generation-wide arrested development, the fact remains that it’s quite the opposite, at least as far as Cloud are concerned.

Adrift in a sea of textures so hazy, so ephemeral as to almost appear transient, Plays With Fire is the Third LP from Long Island’s Tyler Taormina (aka Cloud) and finds the outfit at arguably their most cynical, and paradoxically their most optimistic.

Opening number ‘Happers Laugh’ is an elegantly understated introduction that segues effortlessly in to the airy optimism of ‘Disenchanted’. It’s the The LP’s second single, ‘Two Hands Bound’ however that really begins to elevate Plays With Fire beyond the realms of bedroom pop in to something richer and more encompassing.

Arriving on a wave of bouncing bass and mounting electronics, it’s an ebullient offering on a record that, while not hinged entirely on a sense of melancholy, certainly harbours its fair share of quiet despondency. ‘Oh, So Juvenile’ for instance, or ‘Comet Happer’ on another both offset the hazy elation of tracks like ‘Heartfluttered’, creating a dichotomy that not only provides the record with a sense of emotional balance, but makes it one of the most complex and nuanced records released this year.

Not an album to soundtrack and evening with friends, but one to lose yourself in, relish in the complexities of, and to find your own resonance within its realness, Plays With Fire eschews immediacy in favour of something richer and something that ultimately stays with its listeners for longer.