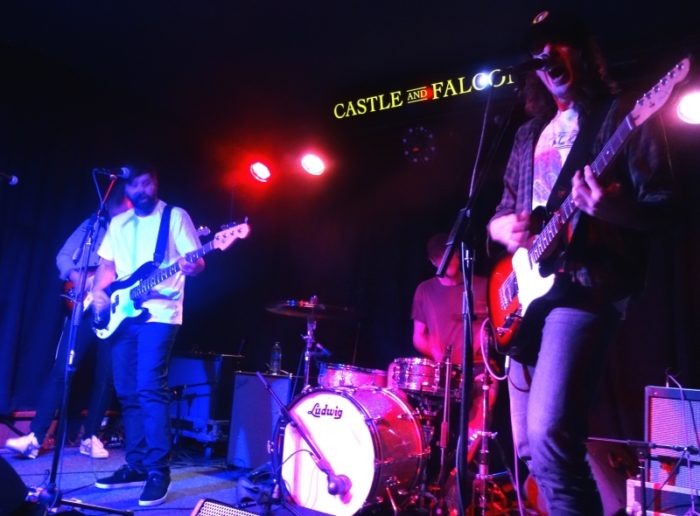 Five albums into their career (or six if you include the joint album with Wavves), Cleveland’s Cloud Nothings have unleashed their latest slab of American indie rock upon the world, Last Building Burning, and they have chosen a very cold and rainy Birmingham to christen the start to their lengthy 2019 world tour.

Support on the night comes from Birmingham’s own Mutes, who blast the crowd with a short set of abrasive lo-fi rock that shows an impressive take on melodic indie rock before taking a rapid left-turn into a noise-fest that stabs as sharp as a sitting on a sharks tooth. The set goes down triumphantly, making the job for the headliners all that more tricky.

Cloud Nothings take to the stage and plough straight into a set that focuses heavily upon 2017’s Life Without Sound, along with the new album, a record which expands on the predecessors sound, adding extra speed and bile along the way.

Whilst the band start off tight and driven, there is little interaction with the crowd who are rather rooted to one spot, potentially due to having to follow a local band or perhaps just first night nerves.  However, at around a third of the way into the set The Echo Of The World makes an appearance. Coming across as the vagrant offspring of early And You Will Know Us by The Trail of Dead with Jayson Gerycz’s rapid gunfire drumming rubbing against the violently ricocheting guitars, the track marks the point at which the previously static nature of the audience gives way… the nodding begins, a few die-hards start a bit of slam dancing, and the set begins to soar.

Darkened Rings gives guitarist Chris Brown a chance to let the noise take hold as the guitars ferociously puncture the sliding bass lines of TJ Duke, all whilst frontman Dylan Baldi screams atop the impressive wall of noise in a manner far removed from the near monosyllabic nature of his between-song banter.

The set draws to a close with fan-favourite I’m Not A Part Of Me from 2014’s Here and Nowhere Else, by which time the potential first night nerves that started off the set are most demonstrably demolished in spectacular fashion, leaving them looking out at an audience with grins firmly planted on their faces. As with the pattern of Cloud Nothings last run of albums, the tour can only go onwards and most definitely upwards.

You can find out more about Cloud Nothings at their Official Website.

Words and photograph by Christopher Lloyd. You can read more of Christopher’s writings at his author’s archive.