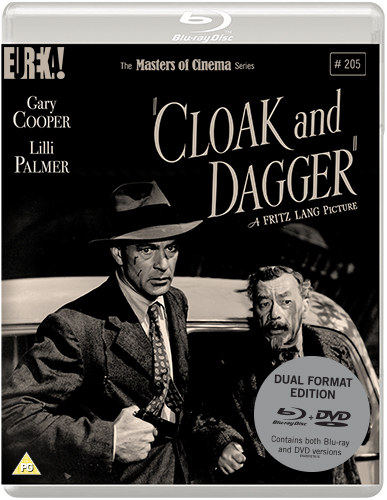 The war is ongoing, and the race to construct an atomic bomb is a priority for both sides.

Alvah Jesper (Gary Cooper) is Nuclear physicist working on the Manhattan Project. He is visited by an old university friend Clem. Clem explains that he is now a colonel in the Office of Strategic Services – America’s precursor to the C.I.A. – an organisation that Alvah hasn’t heard of. ‘Around Washington,’ he explains, ‘we’re called the ‘cloak and dagger boys.’

The purpose of Clem’s visit isn’t to natter on about their student days. The OSS need someone with specialist knowledge of nuclear science, and he would like to recruit Alvah as a temporary undercover agent.

‘This is the first time I have ever been sorry I’m a scientist, Alvah admits. Society, he believes, is not ready for atomic energy.

‘But if anybody’s going to develop the atom bomb, you want it to be us. Not the Nazis.’

Conflicted though he is, this is a sentiment that Alvah can’t argue against. 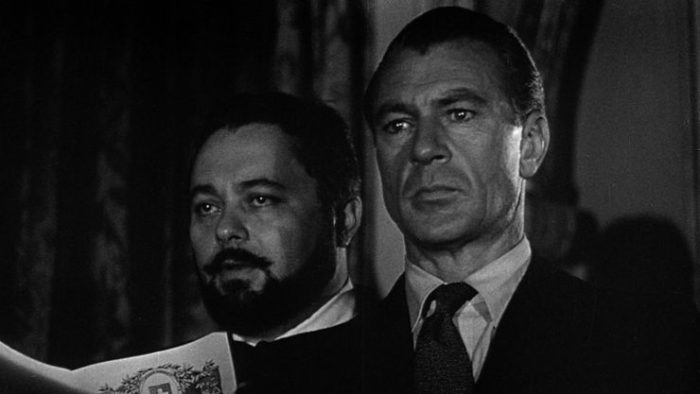 He volunteers to embark on a mission to Switzerland, where he hopes to meet with a fellow scientist, Katerin Lodor. A brilliant mind who recently defected from Germany, she is now ill with pneumonia in hospital. Loder possesses detailed knowledge of how close the Axis forces are to creating an A-bomb.

This doesn’t go to plan for Alvah.

Next, he must secretly enter Italy with the aid of that country’s underground resistance. Here he hopes to contact a colleague of Loder’s called Polda, another leading expert on atomic fission who is working on the German A-bomb. As he previously refused to shake hands with Mussolini, Jesper suspects that like Loder, he is doing so against his will. He is, his daughter being held hostage, her murder assured if Polda fails to co-operate.

In Italy, he teams up with Gina (Lilli Palmer) a resistance fighter. The two work closely together although their time together is often fraught. She’s initially stand-offish to Alvah. ‘Full of vinegar,’ as he puts it.

One brief scene where he asks Gina if she has some milk for a hungry cat demonstrates the failure of many Americans to fully understand the suffering experienced by those living in occupied Europe. She points out she hasn’t had any milk herself in days. ‘If people are hungry, it’s only natural that cats should be.’

She yearns to once more feel like the ‘pre-war Gina’ and even dresses up at one point in an attempt to re-create better her former life. She’s a fascinating character. Undoubtedly brave and capable, she is also emotionally vulnerable and becoming embittered by the hatred she experiences every day of her life. Crucially, she remains determined to go on fighting fascism. 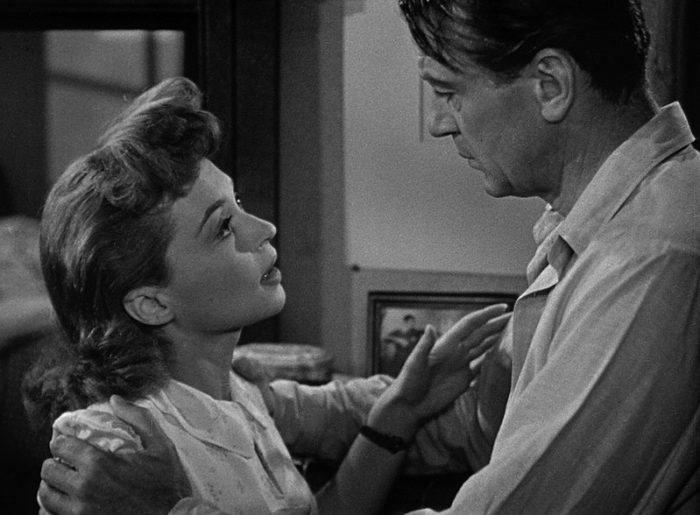 Lilli Palmer, who was Jewish, had fled Germany in the 1930s, ending up in London, where she started her film career. This would be her first Hollywood role and she excels, even if she never entirely convinces as an Italian (a problem with most of her fellow partisans). Some critics have judged that Gary Cooper was miscast here, but he puts in his usual solid performance.

Lang’s film is in many ways a tribute to the wartime efforts of the Office of Strategic Services, although as we’re told after the film has finished: ‘This picture has been inspired by the amazing achievements of the OSS, but no part of it is intended as a portrayal of actual events’.

It’s certainly no propaganda vehicle, and with its strong anti-nuclear message, it is far from the standard Hollywood movie of the time.

Cloak and Dagger isn’t one of Fritz Lang‘s most brilliant films but it is a very good one. In addition to Palmer’s stand-out acting, Lang generates tension superbly, such as when troops loyal to Mussolini stop the truck smuggling Alvah into Italy. The Austrian-born director also gives viewers two fantastic fight scenes, both far more realistic (and vicious) than any American made movie up until that point that I can think of. 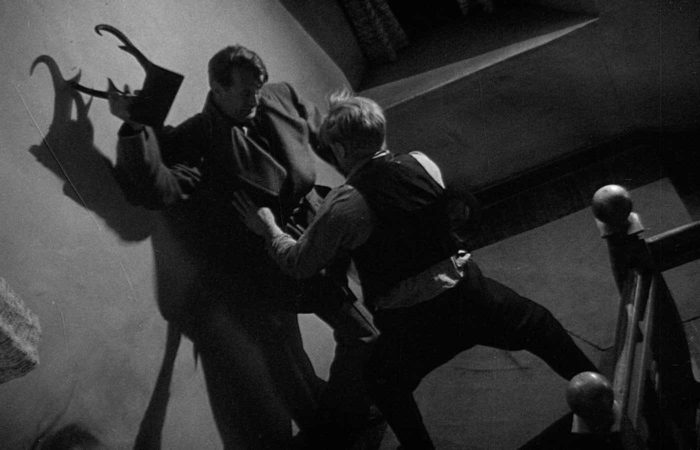