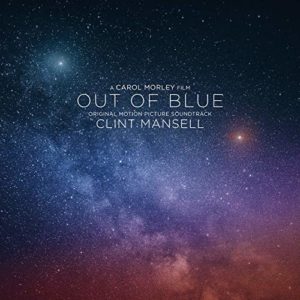 Clint Mansell: Out Of Blue OST

Out Of Blue is a neo-noir mystery directed by Carol Morley (Dreams of a Life, The Falling) and starring Patricia Clarkson, James Caan, Jacki Weaver and Toby Jones. It is also the latest project to be scored by composer Clint Mansell (Requiem For A Dream, Black Mirror). Simon Tucker reviews.

Death and taxes. They say that those are the only two certainties in life. Well you can add a third element to that and that is when Clint Mansell works on something it will invariably be of a high standard. You see, since Mansell’s metamorphosis from grebo to composer, there is a trail of works as rich and as varied as any of those working in the field of pop culture. To sit Mansell’s work side by side is to see an artist find a way of working and just run with it. In the music media the question is often asked “what is the greatest run of albums?”. Answers will always be predominately guitar based band with some maybe name checking Coltrane or Marley yet you never see the work of film composers included. This is a shame for when you look at the wealth of releases with Mansell’s name on them you realize you are watching an artist on one of the most prolific and exciting runs. From Moon to Happy New Year, Colin Burstead, Mansell has constantly delivered and that run is not showing signs of coming to an end any time soon as Out Of Blue shows us that its creator is dexterous and multi-faceted.

Out Of Blue is all about contrasts and balance. The score often puts conflicting instrumentation together yet it never jars or grates. It is a score that the press release describes as “moody”yet there are plenty of uplifting moments here where melodies emerge that catch the ear and lift spirits. One of the finest moments of the album is Observation Changes The Result which melds driving electronica to yearning strings that slowly come in and out of focus before building to a joyful crescendo. Then you have the sublime Astral Blues which pulses into life with the wood and the strings finding a kinship with the insidious pulsing synths and slashing sounds that appear through the first section. Slowly, Astral Blues finds a rhythm and a drum pattern emerges giving the track a slight swing. The drums sound and pattern on here remind of Invada’s very own Geoff Barrow and his work with Portishead / Beak>,.

Other highlights include the demonic waltz of Parallel Universe which creeps and cracks with a piano trying its very best to keep the piece anchored underneath the more chaotic elements that are peppered throughout. Parallel Universe is one of the finest tracks that Mansell has produced and shows his innate talent with the aforementioned balance and contrast. If you’re a fan of Clint Mansell’s more harsher styles then tracks Timeslip and Schrödinger’s Cat (an intense and almost Faust-like closer) will please whilst other tracks such as This Black Holes Dark Heart and Killer allow for more melancholic and serene states of mind.

Clint Mansell’s mastery of pacing, balance, melody, and the more extreme sides of music is all over the Out Of Blue. He plays with contrast throughout. He’s a tightrope walker out in the middle of two skyscrapers, smiling as he walks and the result is a score that is beautiful, intense, pretty and disturbing…..quite often at the same time.