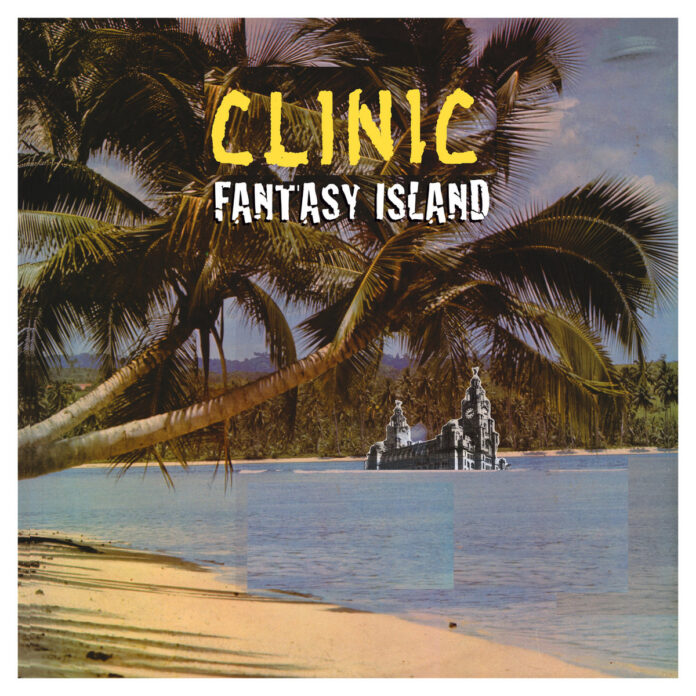 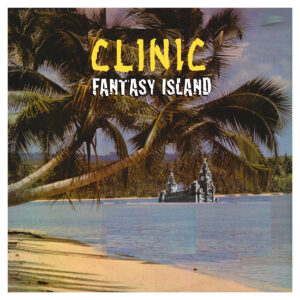 Clinic return for album number nine and take off on a retro electronic trip.

On their last album, Clinic delved into a wistful psych world of English villages. Now, on their new album Fantasy Island, the characters seemed to have packed up and flown away for a holiday full of cheap drinks and retro-futuristic European electro-pop discos where they fumble in the dark sticky corners, bellies full after the all-you-can-eat buffet. It’s a swift about-turn, a dose of optimism and a further revival of times past. In their individual style, Clinic once again draw us into their sharply imagined world to great effect.

Opening with the drunken wooze of Lamplighter, Ade Blackburn’s voice slurred and dreamy, the song winds through a never-ending corridor that shifts and rotates, floral carpets rising up to take hold of the holiday-makers’ heels and drag them under. Like a bad trip, Fear & Loathing In Las Vegas-style. The spiral of island indulgence continues on wonderfully infectious Fine Dining. Through a haze of synths we hear the whispered instructions. “Clip on your tie…take your places please.” The sound that Clinic have returned to on Fantasy Island is one of enticing and hypnotic entrancement. They’re the bellboys, masked for the last two decades, that lead us through the labyrinth of their hotel resort.

Refractions (In The Rain) is one of the standout tracks in the first half of the album. It recalls early Pulp; Clinic reinforcing themselves alongside Cocker & co. as true national treasures, lining up alongside the like of Super Furry Animals in the sonic experimentation stakes. They double down on that Jarvis-style whispering calls from the dark on their wonderful version of Ann Peeble’s I Can’t Stand The Rain.

One of the few nods back to their more twisted garage-stonk days is on the album title track. Here they’re drawing back to a blend of their own past, melding Second Line and Circle Of Fifths to their new processes Euro-disco groove. As someone who has followed the band over the last 21 years, since witnessing their surgical madness opening for Radiohead on the eve of the release of Kid A, Fantasy Island is my personal highlight of the whole album in that it is the most clinically Clinic. That said, they’ve always been a band that have constantly shed their skins and tried to mould themselves into a new concept and sound with each record and this album is no different.

Be it the freaky massage lounge parlour music of On The Other Side or the swirlingly repetitive melody of Take A Chance, the band are more than adept at creating a whole visual world that accompanies their concept. Fantasy Island is yet another great step forward for the band. They’ve created an album of twisted bliss. It’s a world where Human League crash up against Suicide on a sticky Iberic dancefloor before scattering to the dark corners to create their own contorted entertainment until the sun rises once again.