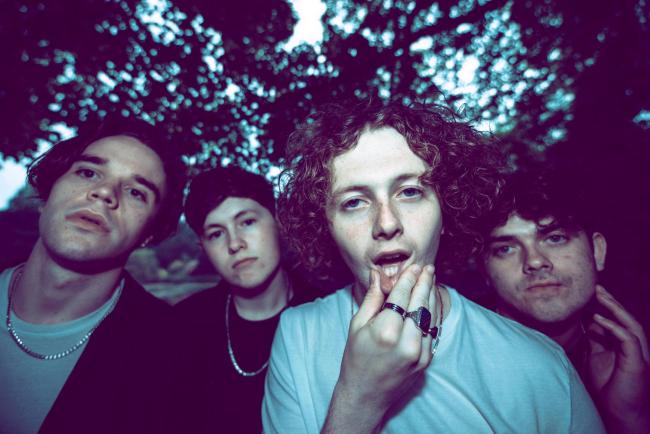 Last weekend saw the second year of Manchester’s multi-venue urban music festival Neighbourhood. More than 100 bands and solo artists will play on the stages of some of the city’s best loved venues including, O2 Ritz, Deaf Institute, Sound Control and The Albert Hall. As well as established bands such as Peace, The Subways and The Strypes and the phenomenal local talent of Cabbage, The Blinders and No Hot Ashes there are dozens of fresh new talent to enjoy and get excited about.

Hailing from Leeds, Clay consist of songwriting pair and brothers: Joe and Jack Harvey whom together with Rob Gration and Danny Armitage will be headlining the Sound Control Basement at Neighbourhood this year. The band are sure to bring their soundscapes of energised indie pop structured from considered synth and enthusiastic guitar riffs.

Clay joined forces, conceiving music as a means of escaping dreary routines and the music that influenced them played a big part in their developing sound. Clay’s lead singer Joe Harvey shares with Louder Than War the Top Ten albums that have left a lasting impression.

Arctic Monkeys – Whatever People Say I Am (2006, Domino Records)
This album for me was the first album that made me really listen to lyrics and understand life out of the bubble that is become so used to. It talked about going out, drinking, life, culture. Going to high school with this in my head had a huge impact on me and to this day still remains, in my opinion, the best debut album of all time.

The Beatles – Abbey Road (1969, Apple Record)
This was the first album I ever got on vinyl so in turn probably played it around 100 times in about a week. Every song is crafted so perfectly from the song writing to the track listing. It picks me up every time I’m down and for that reason is one of the best.

Michael Jackson – Thriller (1982, CBS Records)
No words really. Pure perfection and a true genius. The best that has ever been. Every song a 10/10.

Foster The People – Supermodel (2014, Columbia Records)
In the summer of 2014 I was addicted to this album especially the song ‘Best Friend’. For some reason, I started the day with it every day for about 2 weeks. It became such a vital part to my life at that moment and I still love it. The production is something else. Mark Foster’s voice on this record is insanely good.

Peace – In Love (2013, Columbia Records)
At the time of this record coming out it was a very important part of my life. All my friends were going to university and I felt myself starting to write music on my own and becoming really focused on what I wanted to achieve. I think every song on this record is amazing, I do remember it not getting the recognition it deserved. I saw this in its entirety in 2013 at a small venue in York called Fibbers. So good.

Arctic Monkeys – Humbug (2009, Domino Records)
For me this is the best Arctic’s album. The songwriting on this is otherworldly. I remember being so invested in this album, one particular day I had bunked off school, and ‘Fire and the Thud’ has leaked online. The solo at the end blew my mind and still does. Unreal.

The Vaccines – What Did You Expect? (2011, Columbia Records)
I remember being 17 and going to festivals and gigs religiously. Around about the time we first started drinking in town and going out. It really shaped me and my friends as people and we all shared so much love for this band. ‘Wetsuit’ being the soundtrack to our Leeds Festival 2011!

Duran Duran – Greatest Hits (1998, Capitol Records)
This was on repeat when I was a kid from my Mum and Dad. I love this album so much, and has really influenced me as a writer. What an album. Simon Le Bon been the coolest dude around.

Tickets are available from many of the usual ticket retailers including See Tickets.

Neighbourhood Festival tickets are on sale now priced at £30.00 plus booking fees from the usual retailers including See Tickets.

Visit the Official Neighbourhood Festival website for further information including the full line up, stage lineups and set times.