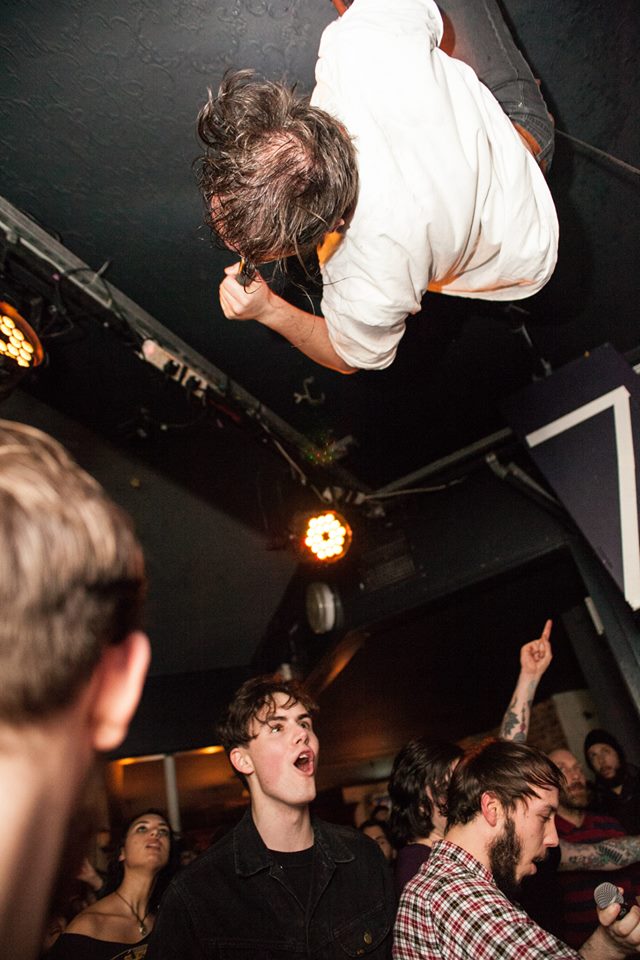 It begins with a chap on stage telling us something no one can understand except for the bit when he asks us to give him “a C, give us an L give us an A…” etc (We were asked to give him a K twice towards the end just before the final S for some reason). He then throws himself headfirst into the audience…causing the floor to thud at the sound of his head hitting it as those beneath him part like the Red Sea. A chair appears above our heads and is handed to the drummer, he needs to sit down because the singer is standing precariously on the swivelling drum stool. A mike stand works it’s way around the room above our heads. A bearded, shoeless fellow with lines across his face also works his way around the room and at times we stand in front of these people with someone’s foot in our neck, arse too close to our face and an almighty racket filling our ears that makes us take a very good look at ourselves before wondering what the fuck is going on.

Fortunately the band in question certainly look as though they know what they’re doing.

They know they’ve got songs and they even know how to play them, however to the uninitiated it’s a case of stroking ones chin and waiting for something coherent to nod ones head to.

The drums are quite good, the bass too loud and we cant hear the words but it matters not a jot that Claw Marks are recreating the sound of seven tractors stuck in a field with the occasional scream for assistance cutting through the mayhem and it doesn’t even seem to matter that someone in the audience we can’t see seems to be a previously unnoticed additional singer with a mike taken from the stage. 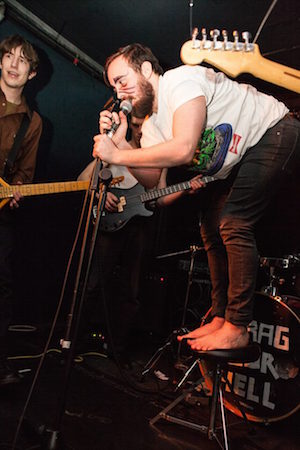 Glass breaks beneath our feet and it’s a chaotic, shambles of a mess that we can tell would make more sense another day just like it did when we bumped into them sandwiched between the mighty Atomic Suplex and Fat White Family almost twelve months previously.

By the end of the twenty five minute set we’re gripped to the side of the venue, holding onto the nearest shelf and empty pint, not wanting to make it an addition to the few already on the floor being trampled on by those still in the throng of an excited crowd.

There’s a man hanging upside down from the ceiling. He’s the singer. a singer who has already removed a white T-shirt to reveal a body that sports….er…another white T-shirt and people dance to the thud thud droning noisy punk rock guitars that swing and sway to what ever the players are hearing in their heads.

We leave the building, none the wiser but happier for the experience and hungry for another repeat one day and a YouTube favourite that shows us that this lot do know what they’re doing and do have the tunes and do have the ability to turn a small room into utter chaos.

Be good to your mums and eat your greens, get your homework finished and when Claw Marks are appearing down your local go and give them a look, learn the dance, lose yourselves in the frantic chaotic mayhem and feel the noise.

You can find more from Claw Marks by visiting their BandCamp and Facebook pages, they also tweet as: @ClorMarx