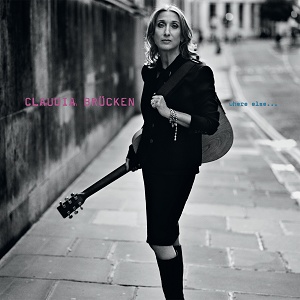 I’ve often had a soft spot for Claudia Brucken, whether it be in her days with the phenomenally underrated Propaganda and their classic album A Secret Wish, or whether it be because my wife bore a striking resemblance to her in her aforementioned musical era. The release of Where Else was therefore greeted with much interest.

What you expect to hear isn’t always what you do hear, and maybe that is the case with this album. Claudia has matured musically, and the pounding bass and drumlines of her former German quartet are gone. Instead she now writes easily accessible pop which is maybe a little too safe. A slight disappointment is that her incredibly powerful voice doesn’t seem to be present on Where Else.

Instead, are ten new tracks of varying style written with former Paul Heaton and Blancmange producer John Williams and a cover version of Nick Drake’s Day Is Done from the Five Leaves Left album. What is interesting and a huge compliment to the songs on the album is that they sit very nicely wrapped around this remake.

Where Else travels down the blues/folk route and often stops off at some very decent tunes. I Want You is a good opener and Nothing Good Is Ever Easy does show that she still has a nice voice with a well formed song and catchy enough hook.

Whilst recording the album, Claudia learned to play guitar and the influences of that new skill are easy to see not only on the album sleeve but also in the tracks themselves. At times leaning heavily on guitar lines, the album shows a side to her that could well appeal to a new audience. Her time spent working with Paul Humphreys of OMD over a decade ago has also given her a break free from her past.

Day Is Done is recorded with love and respect and is a worthy tribute, and recent single Nevermind tickles a funky guitar line whilst it teases a chorus into the fore. It’s probably fair to say that there are no world beaters on Where Else, but it is a solid enough pop album with several good tracks.

There’s a feeling that this album is the pre-cursor to something rather special, and that’s an exciting prospect. There’s no doubt that Claudia has a lovely voice and also that the songs are well written attempts – as Moon Song also demonstrates – and that she does sound comfortable with a safe pop approach. Letting Go almost threatens to break into something bigger and louder but resists.

An accomplished and well-presented album that re-affirms Claudia Brucken as not only a part of British pop history but also a force that could re-emerge very very soon.