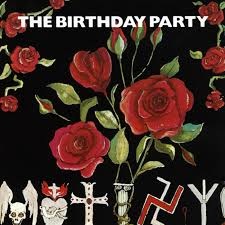 Conceived in what sounded like William Burroughs most skin scratching skag fiend madness and played by a band that looked like fantastic corpses the last two Birthday Party EPs are a group at the top of their deadly game.

At the time they felt like harbingers for what could have been the greatest album of the times- a brutal and brilliant cinemascope of a work that would have tied together all the loose ends that band had been throwing up since their inception in Australia and their arrival in the UK where they reinvigorated a scene struggling to come to terms with post punk depression and Thatcherite cruelty.

It was not like the UK was an empty landscape of creativity that has been painted in this particular story- although there is some truth in that but there was plenty of good stuff going on and in the filthy shotgun blues howl section, well, we had been doing out own thing with our band the Membranes and there were a few others taking a chance out there in the unpredictable and violent UK circuit of toilet venues.

The slightly tinnier production of the Birthday Party’s brilliant earlier work had now been replaced by a clear and bold muscular sound. If the group was imploding it didn’t tell musically. They suddenly sounded like a group on the verge of greatness- even the musical squabbles of all those guitars had been solved when Mick Harvey moved to drums to replace Phil Calvert leaving Roland Howard and guest six stringers like Blixa Bargeld plenty of space for their scurrying lines.

Where could have this have gone next- this was band at the top of their game and sounding and looking at their best with a perfect dishevelled image of bizarre gunslingers from hell with exploding hair and dressed in second hand suits on their own take on the best of the UK underground freak show, the next step could have been mind blowing. The last two releases, though, are perfect scorched earth music and maybe there could be no next step. You had to be playing the end game to create these masterpieces.

Sonnys Burning is perhaps the band at their peak with a song that boldly uses the new found dynamics with an air of barely subdued violence reflecting the tense and brutal post punk of the UK- a place where grey was the predominate colour and the so called scarlet pimpernels of the so called goth scene were reacting against this dustbin nation with powder keg violence and a maelstrom of brilliant sound.

When Cave snarls ‘hands up who wants to die!’ at the beginning of the song he is not kidding and the drums clatter in with a rush of taut wire tension and a harbinger for mosh pit frenzy or whatever it was called in those days.

And then, when Tracy Pew brings in that avalanche bass line the whole thing is like a wall of thrilling sound- it’s impossible to listen to Sonnys Burning without getting the fear- a delicious fear of the exploding tension and violence. Look, this is what so called alternative music sounded like thirty years ago- it was certainly not that coffee table stuff so loved of the media these days- those shampooed and perfumed pets with their guitars and shampooed songs cuddling their guitars and their dull emotions and couching them into duller records- this was a brooding and thrilling violence and the Birthday Party probably caught it better than any other group.

Wild World is a sonorous and doleful clanking grind- the drums are stark and powerful as the bass coils around them like smoke from a stinking fire. Roland’s guitar never sounded better- a riff that truly drips blood and kisses and he plays sparsely giving the song so much gorgeous space for Nick Cave to howl over- a truly fantastic work of power and danger and beauty.

Fingers Down The Throat of Love enters with Tracey Pew at the very top of his game on the bass- a typically rotating bass line swinging like a dark and heavy pendulum as it swigs the flithy brew from the cracked bottle of rock n roll. The chopping guitars add a fantastic hi tension line to the song that when it kicks in scratches and scrapes like a terrified animal. It also has that groove, the deep and dark F.U.C.K groove of all the best rock n roll. This song sounds truly dangerous in a way that most modern alternative music would back away from, terrified of losing their chance of getting onto those weak playlists.

Deep In The Woods is a hint of what was going to come- if these two EPs were felt like to be the hint of s coming electric storm of grandeur and a spectral madness then they were also the sound of a band falling apart and when Cave reemerged with the Bad Seeds he took his music in a more soundscape balladic direction which deep In The woods was already hinting at with its stripped down and melancholic style.

The Birthday Party had done ballads before- She’s Hit is a fine example off the Junkyard album- they specialised in these songs that were devilishly dark songs- murder ballads of heartbreak and love and death- it was just that with Deep In The woods the sound had opened up and that space is so perfect to add to the rank and deadly atmosphere of the song and also gives space to Nick’s ballad of death and amour.

Roland’s guitar is fantastic in the song- clipped and held back it sounds like a chain getting dragged across the ground and its nail biting tension explodes when the song goes into the bit at the end where it goes into a sort of sing a long part is stunning. Oh! and the drums are great at well- deceptive sparse simplicity with a jazz swing- perfect.

The second EP ‘the Bad Seeds’ also would christen the upcoming solo band from Cave kicked off with Jennifer’s Veil- a deep, dark blues with a resonating funeral march, clanking, church bell of a guitar that is terrifying and spaghetti western hypnotic. There is a glowering darkness and, as ever, Cave is on top form with his lyrics spitting imagery and biblical dark mantra over songs that entwine the deep, dark art of love and the chemical rush of whatever madness they were surfing on at the time. Yet again you can hear where Cave is going when the whole band implodes and he gets the solo thing off the ground.

Six Strings That Drew Blood was reportedly a song that caused problems in the band and it sounds unfinished- parts of it are great but there is too much clutter in its electric ranks- like some kind of musical and sonic argument over whose part is going to dominate this damn song.

Say A Spell is like some kind of demented take on a long lost crooner ballad from the golden age of radio dragged through a hedge backwards and given the dramatic noise and thrilling dark treatment. This was a band that understood a walk on the DARK side and made the tragic ooze in their songs.

Swampland is a thrilling song of personal abuse and craving- a sonic rumble and the Birthday Party at their most demented and feral. Built around a driving drum beat, the song sounds like a jam- one of those perfect jams when everything lands in place and all the contributors capture the magic and atmosphere and the terror of their environment with sound. The band are so hot that they capture the atmosphere in one fierce take and the screams on the song sound like the screams of death and the paranoia and terror of the chase alluded to in the song is one part filmic and one part real life which makes for a fantastic piece of listening.

Pleasure Avalanche is spined by the bass giving it the deep, deep rumble of terror that oozes the black sticky stuff at the heart and soul of rock n roll only it’s cranked to a thrilling nastiness as the song seems to detail the rush of an intoxicating buzz of sex or other means in a dense and scary argument of sound- it sounds enormous.

Mutiny In Heaven is the sound of the blues gone black and is the fierce double tracked argument that is littered with classic Cave lyrics that sound like the devil’s disciples arguing with each other over the churning backbeat. Nick Cave sounds at his most terrifying on the track- the double tracked vocal of differing parts sounds like a heated argument in Hades. This sounds like the scratching terror of addiction – addicted to the darkest blues or whatever matters little it’s the songs claustrophobia and brilliant poetry that counts and the Pandora’s Box of evil has been opened and all the madness and lyrical skree pours out and is captured with a brilliant effectiveness in a battle between good and evil.

If only they could have held on for one more album but then of course there are these two EPs that could be played together and we kinda have that album- a band whose sound was stretched taut to its extremes from the power tool rush to the heartbreak ballad, everything here was now 3D, everything here was a band at the end of its tether with its nihilism eating at its soul like the Sex Pistols a few years before but darker. Far darker.

Sometimes the greatest art is made in the most strenous of circumstances, the last chapters of the Birthday Party sound not only like the battle for the soul of the band but the battle for their very souls themselves and it’s this dark and dangerous mindset that we pay these damned artists for surely…!