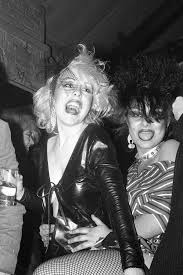 Five years after an enormously popular exhibition hosted by National Museums Liverpool, iconic black and whitephotographs of bands and their audiences taken in and around music venues in Liverpool and Manchester in the late 70s and early 80s have finally been published in book form after a hugely successful crowd funding campaign.

‘REVEALED: Youth culture, pop culture, subculture – The Photographs of Francesco Mellina 1977-1982’ isavailable now in selected book stores around Liverpool.  The release of the book is being accompanied by a number of Q & A and signing events in Merseyside and Manchester.

The book, a project started soon after the ‘Sound & Vision’exhibition in 2009, has been produced thanks to a collaboration between the photographer Francesco Mellina and book designer Michael March and funded through a successful Kickstarter campaign.  It boasts dozens of photos of some of the most recognisable faces in rock and pop and a foreword penned by Paul Du Noyer.  The founding editor ofMojo Magazine and former editor of Q, says of the project,

“I’m thrilled to see Francesco’s book come to fruition. His remarkable career deserves it. He captured a whole scene, onstage, backstage and front of stage – and has given us a powerful and beautiful document of that exciting time.”

Mellina, the man behind these amazing images, is originally from a small town in Calabria, Southern Italy; fascinated by all things British he taught himself English by listening to early Beatles and Rolling Stones records before setting off on a tour of Europe that would see him eventually settle inLiverpool.  Once there and after enrolling on a photography course at the Art College on Hope Street he immersed himself in the vibrant and eclectic club scene of the city, taking photographs of bands such as Echo & The Bunnymen, Talking Heads, U2, The Clash, Roxy Music, Depeche Mode, Kraftwerk, New Order and The Ramones.  He also spent some time as manager of Pete Burns’ band Dead or Alive; there are a number of stunning images of the pre-cosmetically enhanced Burns in the book.

But it wasn’t just the musicians that Mellina was capturing in legendary venues like Eric’s and Brady’s in Liverpool andThe Apollo and Free Trade Hall in Manchester; his photographs of the club-goers record the fashions of the various subcultures in clubland during this pivotal post-punk era.

“It’s the total scene that I loved” says Mellina.  “I recorded a moment in time.  More than just the bands…its ordinary people, clubbers, that side of life.  Some of these pictures encapsulate it all, the dressing up, the going out, the happiness…”

Of the continued impact of his photographs and excitement surrounding the publication of the book he says,

“I’m delighted that the book is finally published.  I’m also extremely happy that the book has had such great backing from so many people and that the photographs clearly still mean so much to the people who were there nearly 40 years on.  I feel very lucky to have been in the right place at the right time to capture it all.”

The book and associated merchandise is also available to order online at https://march-design.co.uk/revealed/